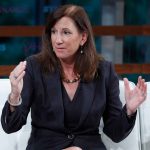 WNBA Commissioner Cathy Engelbert is a longtime golfer — and the newest female member of the USGA Executive Committee.

You’d be hard-pressed to find a more impressive resume than Cathy Engelbert’s. The New Jersey native spent 33 years at Deloitte, which culminated in her election to CEO in 2015, making her the first-ever female to hold such a position at a Big Four accounting firm.

In 2019, she was named the first commissioner of the WNBA, and in February, Engelbert became the newest female member of the USGA’s Executive Committee, a 15-person volunteer group. Each member is elected to a three-year term to serve as the governing body’s policy-making board.

Engelbert brings with her a fresh perspective and the enthusiasm of a person who truly loves the game. Below, she shares her ideas on what it will take to retain the influx of new female golfers, how to get more eyes on women’s events, her thoughts on the most pressing issue facing the USGA, and more.

What is your golf background?

I’m actually a recreational golfer, I’d say. I really started playing to have another way to build business relationships back when I was in my late 20s and early 30s. And I did play in the AT&T Pebble Peach Pro-Am a few times over the last couple years, and the American Express in 2020. Scottie Scheffler and I were in first place after the first round. That was right before the pandemic hit. And then I played in the AIG Women’s British Open Pro-Am. I just love the game. I have five brothers. They all play. And every summer down the New Jersey shore, we do an outing. We call it the Engelbert Open. I think we’re on our seventh annual. And now my two kids play. And it’s just such a great game to network and build relationships personally and professionally. I played college basketball and lacrosse and didn’t play golf until I was almost 30. But I’m so, so happy I found the game.

That’s so cool to hear because so many women, I think, are so intimidated by the idea of becoming golfers as adults. But truly, it’s never too late to start.

Never, never too late. Definitely. That’s why I wanted to get my daughter into it early. She’s left-handed, so she’s got this beautiful swing. But she’s a beginner. So we’re really getting her up and running to play.

What is it that made you want to be a part of the USGA Executive Committee?

I became familiar with the mission of the USGA when I was the CEO of Deloitte. I was there for 33 years and when I became the CEO in 2015, my team brought forward a potential sponsorship of the USGA. And I guess they figured, “We know Cathy plays golf.” And the prior CEO didn’t play golf. And so I really like the values match. And then the talent play that it brought to us was a firm of 100,000 people. So during that time, I got to meet some of the executive team, some of the members of the Executive Committee. And I really just felt that cultural match. So when I was nominated, I was thrilled because it was something I’d kind of put on my goals list. But certainly it wasn’t something I was actively looking at.

After spending four years as Deloitte’s CEO, you became the commissioner of the WNBA in 2019. Is there any crossover there, that’s applicable to what’s going on now with the USGA?

I’ve only been in this role two years, as the Commissioner of the WNBA. But I think my three-plus decades at Deloitte kind of prepared me well to add value as an Executive Committee member. I dealt a lot with emerging technologies to transformation work and, of course, finance. And now that I’m representing women’s sports, I think I have an eye into the case to change around fan engagement and second-screen experience and digital and consumer behaviors and, certainly again, the financial side of sports. So I think that’s what I bring. And certainly now, running a consumer brand and golf being so, again, direct-to-consumer now, is another thing that I look forward to bringing my expertise on.

There’s been a lot of clamoring, especially in recent months, for a plan to get more eyes on women’s golf, and on the major championships in particular. Are there any learnings from the WNBA that you think could help?

Yeah. You know, women’s sports is really hard, first and foremost, and I didn’t know that coming into this role. But it’s three words, and they’re all the same word: marketing, marketing, and marketing. So what I say about the WNBA is we need to continue to build household names and rivalries that makes watching compelling. And we know that golf is very compelling. You probably know the statistics on sponsorships and media coverage of women’s sports, which are both less than five percent of total dollars spent. So it’s marketing, building rivalries, household names. I’ve studied a lot of sports leagues and individual sports like tennis and golf. And if you look at women’s tennis, look at Serena. Household name. Crossover athlete. Now, I think Naomi Osaka’s becoming that. So tennis has done a nice job.

And I think for the WNBA and for women’s golf and women’s soccer and other sports — make it something that people want to watch, and then make it easy for them to find no matter what platform you’re watching your live sports on.

How important is getting exposure on network TV?

Getting them on network TV and coverage is such a good start, but it’s clear that younger generations are watching sports in different ways. When we were in the WNBA bubble last year, we introduced a second-screen experience that brought fans in, such that fans tapped 140 million times on our second screen experience called Tap to Cheer. And gamification I think is important. Storytelling, as you said before. But I still think it’s built-in household names. You only need one or two. Build a few rivalries. And people will come and watch. It’s happened in tennis. It’s happened in the men’s game on the golf side. And it happens, obviously, in all the men’s [sports]. So I think that’s storytelling. But marketing is so important. And if you can build a marketing platform and you can get your sponsors and partners to help you do that, because there’s only so much paid media that you can pay for and it’s very expensive. ESPN doubled their coverage of [the WNBA], and our viewership is up 68 percent when every other sports league was down last summer. So there is something to be said about that.

According to the National Golf Federation, women are representing 40 percent of new golfers now. Given that statistic, how can we encourage those women to stick around and stay in the game?

Yeah, I was glad to hear that. I think this could be attacked multi-dimensionally. I think making the game more engaging for women, not too intimidating. My father had passed away right when I was out of college. And then a few years later, I picked up the game by picking up his clubs. He was 6’6″, and they were custom. And I couldn’t get the ball in the air for a year. And it’s frustrating and I could have quit. But I was an athlete. So I said, “I really want to do this.” So I think finding ways to make it a family activity. Now, I love when the summer comes around here in the Northeast. I get to go out and spend time with my kids on the golf course. But what do most women value the most? What do you value with two young children? Time. So shorter rounds. I think the “Play9” stuff the USGA has done has been great..

What do you think is the most pressing issue facing the USGA right now?

It’s a really good question. For someone like me coming in fresh, I look forward to listening to the management team and other stakeholders and really just get a whole ecosystem, including fans, on the most pressing issues. I don’t wanna go in with a supposition as to what those are, but I would think at top of the list is kind of sustainability. We need golf to cost less, be played in a shorter timeframe. We need it to be more inclusive to more people. And in my view, drive the next very diverse generation, these Gen-Z’s into the game. And keep them in the game, and keep them watching the game on the different platforms. And supporting public golf courses. And I just think there’s so much opportunity to continue to grow the game and be more inclusive. So I’d say I know there’s a lot on equipment standards, and I know there’s a lot of other things going on. But the sustainability is broadly defined as economic/social/environmental. The broad sustainability question.

All of that seems to coincide with the ultimate grow-the-game initiative. We all want the game to thrive. What is the best way to do that?

I think the more we can look at programs like the First Tee, a way to introduce the game to juniors, the LPGA/USGA stuff. It’s just like giving more pathways to people to play. And another idea I had, the public school systems. I grew up in public schools. My kids went to public schools. And in my prior life, I would go to the public schools to actually talk about my profession and what I did. And that attracted some people into our profession. Because they would say, “Okay. Here’s a female with two kids who’s the CEO of a big firm. And maybe that’s what I want to do.” I think the same thing about golf. Educate and give pathways to kids in the public school systems to expose them to the game. And not that you’re trying to get everybody to play, but I think it’s a little bit of a grassroots effort here. I’m really looking forward to hearing more about the next generation of these programs at the USGA.