It’s baaaack…and it’s a doozy. For this year’s edition of our always-revealing GOLF.com Anonymous Pro Survey, we protected the identity of 52 card-carrying PGA Tour players so they could speak candidly about the hottest topics of the day.

In return, they gave us their unfettered takes on everything from Tiger Woods (yes, he’ll win more majors) and Donald Trump (still popular), to driver testing (inadequate), backstopping (is it cheating?), best and worst Tour venues (sorry, TPC San Antonio), and favorite and least favorite playing partners (scroll down!). They even told us who is the most famous person in their contacts (looking at you, MJ).

Polling was conducted at the Safeway Open, in September. Over five days, we asked each player 46 questions. Among the respondents: 30 Tour winners, three major winners and 15 players who have made a Ryder Cup or Presidents Cup team.

The mic is now theirs…

WHICH TOURNAMENT IS HARDER TO WIN?

“Do I get some brownie points from the Tour for saying Players?”
“Players. Everyone in the field can win it because the course doesn’t favor any particular style of game.”

WHICH TOURNAMENT WOULD YOU RATHER WIN?

“Whichever has the biggest purse.”

IS THE SIGNIFICANCE OF THE MAJORS OVERRATED?

“Yes, by fans.”
“Every week feels like a major.”
“Majors are what your career is based on and how you are remembered.”

WHO GOT YOUR VOTE FOR 2019 PGA TOUR PLAYER OF THE YEAR?

“Thirteen top 10s — Rory”
“Easy. Hands down, Rory. If he didn’t win the Tour Championship, it would’ve been close. He was the most consistent. People don’t give him enough credit for all those top 10s.”
“I forgot to vote.” 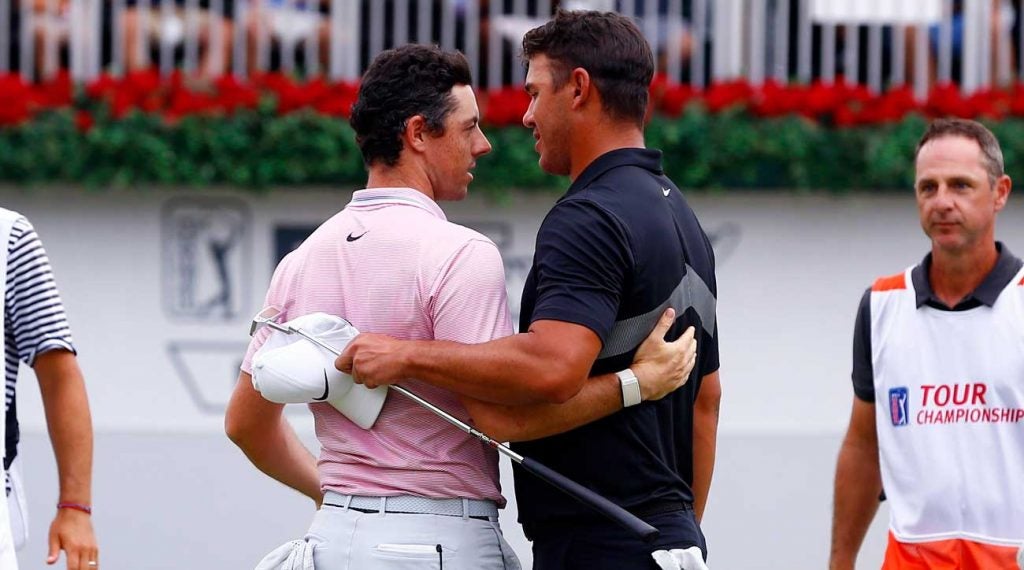 WERE YOU SURPRISED THAT MCILROY WON?

“Who counts the votes? It’s the Tour, right?”

IN GENERAL, PGA TOUR SETUPS ARE…

“Grow some rough.”
“We need more rough.”
“Setups are too long. There’s not enough rough and they don’t penalize bad drives enough.”

RELATED: Are the pro tours failing to test the best players in the world?

TRUE OR FALSE: THE TOUR WOULD BE MORE INTERESTING IF THERE WERE FEWER EVENTS.

“More millionaires, but more guys getting hurt. If you increase quantity in any industry, quality goes down.”
“Would not be good for the new guys.”
“A four-month break would make fans psyched that golf is back.”

ARE YOU A FAN OF THE NEW COMPRESSED MAJOR SCHEDULE?

“It’s not like the Champions tour with a major every other week.”

HOW MANY TIMES LAST SEASON DID YOU WITNESS A PLAYER KNOWINGLY BREAK A RULE AND TRY TO GET AWAY WITH IT?

“A few. More than you think. Always a hazard drop.”
“Zero this year, but last few years about five.”
“In person or on TV?” 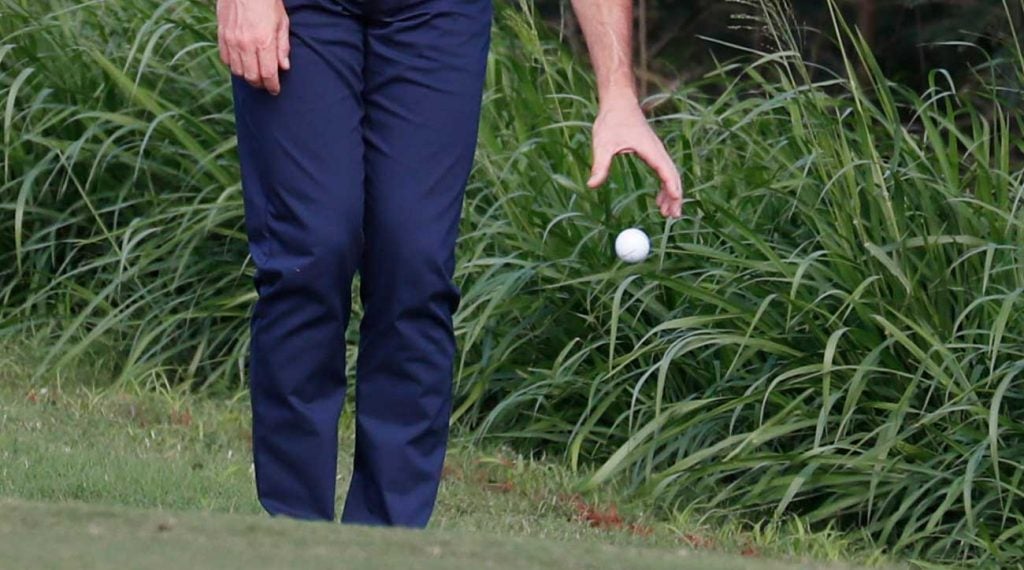 "More than you think," one player said of the frequency of cheating on Tour. "Always a hazard drop."
USA Today

DO YOU CONSIDER “BACKSTOPPING” CHEATING?

“Seen instances but it’s blown out of proportion.”
“We’re not that good.”
“It’s against the rules. Look it up.”
“Only in rare circumstances. Everyone wants it to be fair.”
“It’s not cheating, but you should protect the field.”
“It’s not done with the intent to cheat.”
“By the letter of the law, yes. In my mind, no.”
“Absolutely.”

RELATED: Is backstopping a problem on the PGA Tour?

HAS FLAGSTICK-IN PUTTING MADE PUTTING EASIER?

ROUGHLY WHAT PERCENTAGE OF TOUR PROS WOULD YOU CLASSIFY AS “SLOW PLAYERS”?

32% (average of all responses)

IS EVERY PLAYER IN THE TOP 125 CAPABLE OF WINNING A MAJOR?

WILL RICKIE FOWLER WIN A MAJOR?

WILL TIGER WIN ANOTHER MAJOR?*

“We all said no before and he did, so I say yes.”
“Two more Masters. He’s going to have to get lucky, though, because his body is breaking down.”
“Yes, and I would’ve never said that two years ago.”

(*Question was asked before Tiger’s 82nd Tour win in October.) 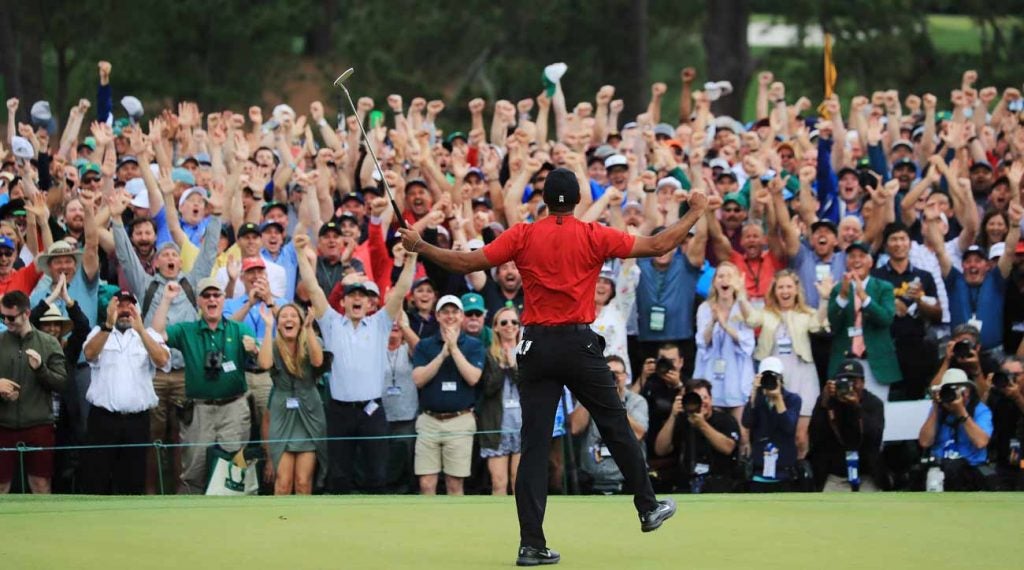 WILL PHIL WIN ANOTHER MAJOR?

“Yes, he’ll win another major…on the Champions tour!”
“He looks like the Incredible Hulk right now.”

WHO WILL WIN MORE MAJORS IN HIS CAREER?

“If both stay healthy, Rory. Brooks is going to get injured working out.”

RELATED: If Brooks-Rory wasn’t a rivalry, Koepka just made it one

HOW MANY CARS DO YOU OWN?

HOW MUCH CASH ARE YOU CARRYING RIGHT NOW?

IF YOU AND TIGER PLAYED A 36-HOLE MATCH TOMORROW, WHO WINS?*

(*Question was asked before Tiger’s 82nd Tour win in October.)

WHO WILL HAVE THE BEST CAREER: MATT WOLFF, COLLIN MORIKAWA OR VIKTOR HOVLAND?

“There’s no way Wolff’s back holds up with that swing; I love Hovland’s fundamentals.”
“Morikawa has the better swing.”
“Hands down, Hovland — a game that will last.”
“Morikawa hits it so much better.”
“Hovland is so solid all around.”
“All capable. It will come down to who wants it the most.”

WOULD YOU PLAY IN AN OFFICIAL PGA TOUR EVENT IN WHICH PGA TOUR PLAYERS TEAMED WITH LPGA PLAYERS?

“Will the girls earn the same purse money as us?”
“I wouldn’t know anyone to ask.”
“Never.”

HAVE YOU EVER HEARD OF PLAYERS GAMBLING ON OR AGAINST THEMSELVES?

WILL DONALD TRUMP GET YOUR VOTE IN 2020?

HAVE YOU EVER HAD SEX ON/AT A GOLF COURSE?

DO YOU KNOW YOUR EXACT WORLD RANKING?

IS THE DRIVER TESTING AT TOUR EVENTS ADEQUATE?

“They’re not doing everyone — that’s not enough.”
“Is there an option for ridiculous?”

TRUE OR FALSE: THERE ARE PLAYERS WHO KNOWINGLY USE HOT DRIVERS.

IF YOU WERE TO TEST EVERY DRIVER IN A RANDOM FIELD, WHAT PERCENTAGE WOULD BE NON-CONFORMING?

18% (average of all responses)

WHO KNOWS MORE ABOUT THE GOLF SWING: YOU OR BRANDEL CHAMBLEE?

“He seems like he knows more.”
“I don’t know anything about the golf swing.”
“I hate to admit it, but Brandel.”
“He knows more about everything.” 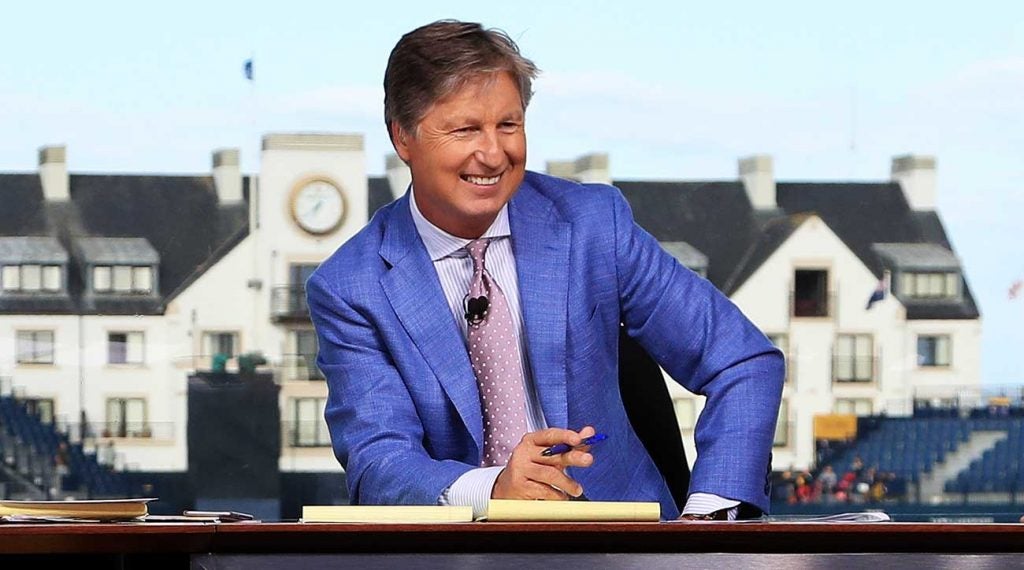 WHAT PERCENTAGE OF THE PLAYERS IN THE TOP 125 WOULD YOU ESTIMATE REGULARLY USE CBD PRODUCTS?

29% (average of all responses)

SHOULD THE TOUR REMOVE MARIJUANA FROM ITS BANNED SUBSTANCES LIST?

“It’s still an illegal drug.”
“They should add nicotine.”

HAVE YOU SMOKED POT/INGESTED EDIBLES IN THE LAST YEAR?

HOW MANY TIMES DID THE TOUR DRUG TEST YOU LAST SEASON?

CAN YOU ENVISION A DAY WITHIN THE NEXT FIVE YEARS WHEN AN ACTIVE TOUR PLAYER WILL COME OUT?

DO YOU KNOW OF ANY ACTIVE PLAYERS WHO ARE GAY?

IF/WHEN YOU WIN A TOURNAMENT WHAT PERCENTAGE WOULD/DO YOU GIVE YOUR CADDIE?

10% (average of all responses)

IF YOU HAD A FILL-IN CADDIE ON YOUR BAG FOR A WIN, WHAT PERCENTAGE OF YOUR CHECK WOULD YOU GIVE HIM/HER?

WHICH TOUR PLAYER HAS THE SALTIEST MOUTH? 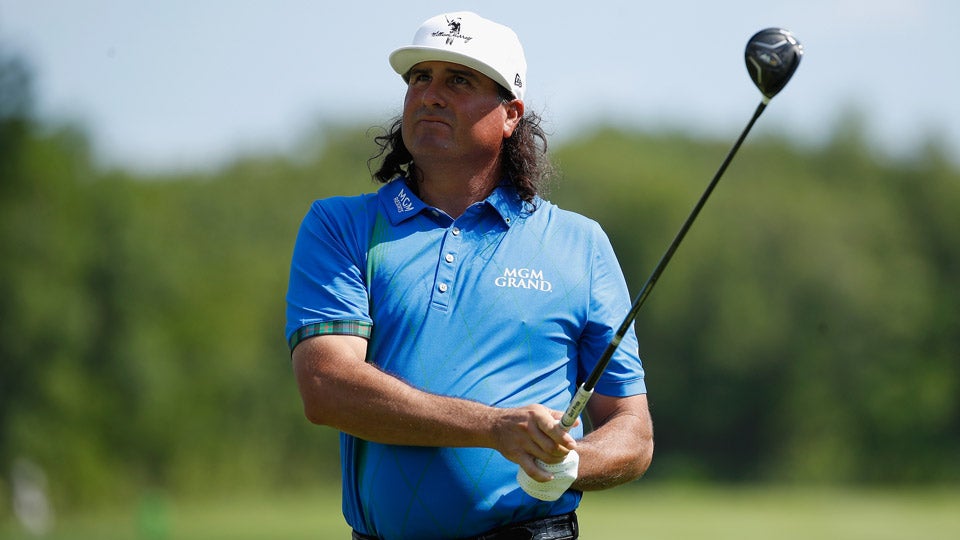 Pat Perez has never been one to mask his feelings.
getty

WHO IS THE MOST INTIMIDATING PLAYER?

“I assumed it was Tiger then I played with him and he was, like, the nicest guy.”
“It’s golf, hard to be intimidating.”
“Used to be Tiger. Not anymore. Rory.”

WHO’S THE MOST FAMOUS PERSON IN YOUR CONTACTS?

Names that were cited more than once:

“Since President Bush passed away, have to say Tiger.”

WHO IS YOUR FAVORITE PLAYING PARTNER ON TOUR?

WHO IS YOUR LEAST FAVORITE PLAYING PARTNER ON TOUR?

WHAT IS YOUR FAVORITE TOUR COURSE? 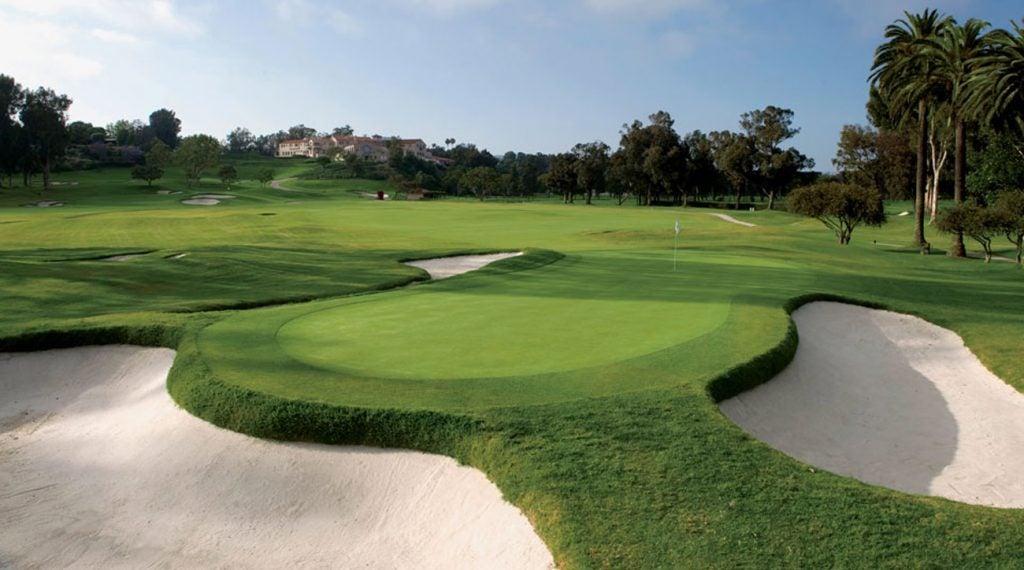 The Genesis Open has called Riviera Country Club home since 1973.

WHAT IS YOUR LEAST FAVORITE TOUR COURSE?

“Wherever I missed my last cut.”
“TPC San Antonio wasn’t designed for the predominant wind. Big miss.”
“This one right now.” [Silverado]
“They’re all good today.”