The moment the 2019 PGA Championship turned to pure pandemonium

FARMINGDALE, N.Y. — At 5:43 p.m. Sunday evening, Brooks Koepka and Harold Varner III, the final pairing in the final round of the PGA Championship, stepped onto the 14th tee. Varner was coming off back-to-back bogeys and had plummeted down the leaderboard. But Koepka was in a far more precarious position. His seven-stroke lead had become three as he’d run off bogeys at 11, 12 and 13.

A distant roar came from a green down across the road and back up a steep fescued hill. World No. 1 Dustin Johnson, in the midst of playing the day’s best round (not its lowest, but its best) had done something good on No. 15. Koepka glanced over, generally aware of the gravity of what was happening, if not the specifics.

Varner played first. As he stood over his ball, the scoreboard facing the crowd flickered an update: JOHNSON -8. Koepka’s lead was down to two.

Had Varner been near contention — or generally less shell-shocked — he would have stepped away. Instead he hit a fluttering iron shot that drifted short and right of the pin, settling in the cavernous front bunker. Jazz Janewattananond had done the same thing one group earlier. Even atop an exposed ridge, there seemed to be more wind than the players felt.

Koepka may have thought the same thing, and attempted to play his iron shot past the front pin. But whether from adrenaline, miscalculation or just pure smash factor, Koepka’s ball pierced through the wind and airmailed over the back, nearly 30 yards long of the pin. 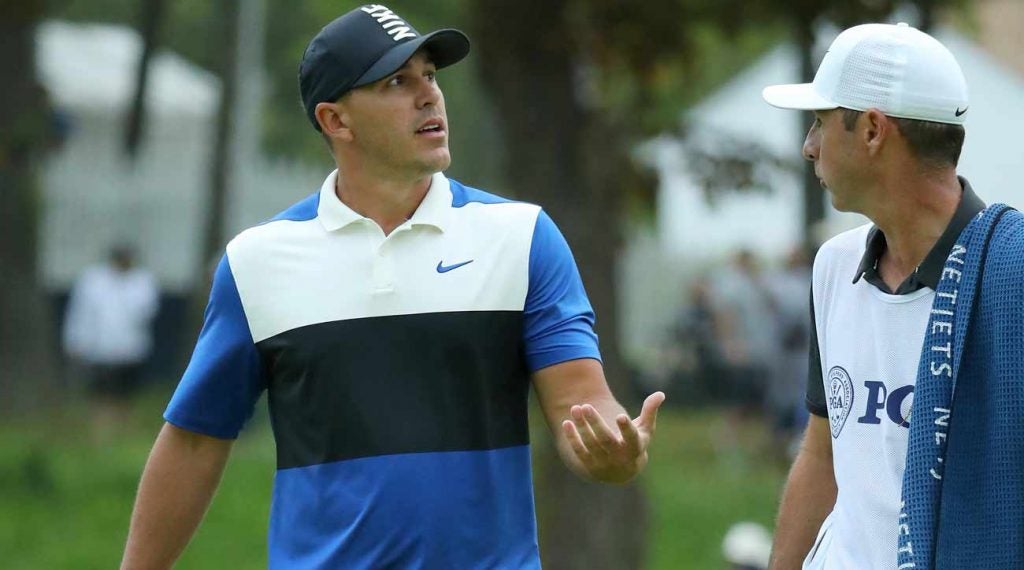 Brooks Koepka was bemused by the wind — or lack thereof — on No. 14 at Bethpage Black.
Getty Images

It’s hard to say with certainty why the Long Island mobs had suddenly turned on Koepka. He’s hardly the most popular Tour star, but crowds generally favor chaos, too. The combination of factors turned them boorish as Koepka approached his ball.

“Shank it!” one screamed.

Another set his phone to “record” and yelled something vulgar about Koepka’s wife, displaying his intoxication as well as his confusion over Koepka’s marital status.

After the round, Varner would decry the fans’ actions, saying he had “some choice words” for the way they were treating the tournament leader. Koepka strode past them, stone-faced, registering but not reacting. Varner hit up from the bunker first, and then Koepka played quickly, as he does, hitting as good a pitch as could be expected, leaving 19 feet. His par effort slid by and kept sliding, leaving 4 feet, 2 inches. Now he was putting just to keep hold of his lead at all.

One of the notable things about seeing Koepka in person is just how sturdy his game appears. He builds a solid foundation around which his swing turns, and his putter swings. There’s so little wasted movement that any missed shortie comes off as a surprise.

Sure enough, the four-footer found its mark. But the lead was down to one, and KOEPKA -9 flashed onto the screen, and the scrum of spectators poured down the hill towards the 15th tee, which abuts the 16th hole, where Dustin Johnson was striding down the fairway. Everything had gone suddenly mad.

The moment would pass. Johnson would bogey the next two holes. Koepka would steady the ship. The coronation resumed. But for just a moment, Koepka and the 2019 PGA Championship felt on the brink of a far different type of history.