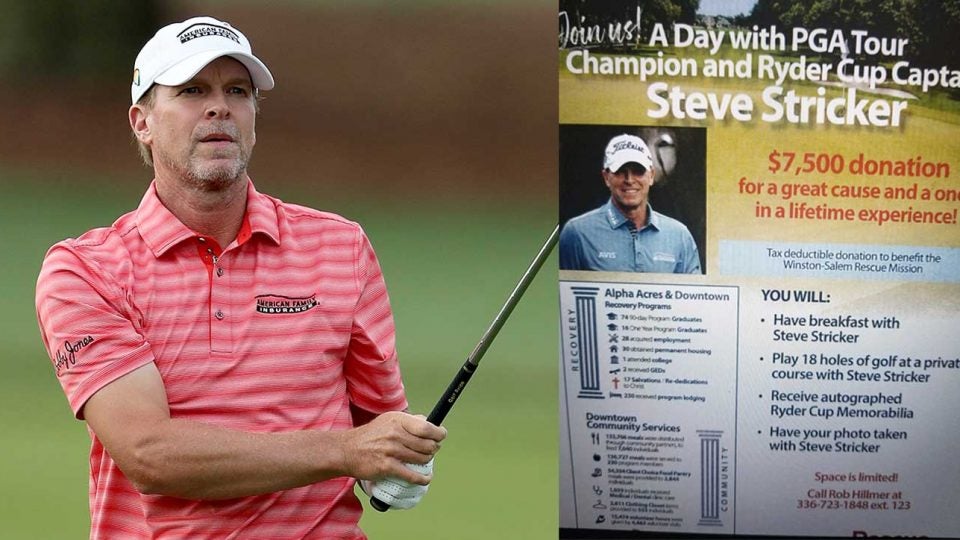 A bizarre story out of North Carolina surfaced Thursday morning, in which Steve Stricker was promised as host of a Winston-Salem charity golf tournament. One major problem: Stricker had no idea, nor did his representation.

A string of tweets between Stricker and people attending the event showed that organizers promised Stricker would take part in the festivities, which included a clinic, 18 holes with the 12-time PGA Tour winner and a breakfast with golfers who donated money. Those tweets have since been deleted, but only well after Stricker was made aware of it. Stricker quickly responded, saying he was never contacted to do any event in North Carolina. The event, named the BB&T Invitational was scheduled for Thursday, with benefits the Winston-Salem Rescue Mission, a “non-denominational ministry that provides services for anyone who calls on us for help, regardless of race, cultural or ethnic background.”

Wow! Sorry to say this but it sounds like some sort of scam. I was never contacted to do any event in NC. https://t.co/0tQbqhaxQE

I’m good Kevin, thanks for your concern! But, what club was I supposed to be at? I don’t have that short game clinic on my schedule. 🤔 https://t.co/VIh2No5na5

Sean Branagan, the head pro of Maple Chase Golf and Country Club, where the event is hosted, tweeted a photo of a flyer that promised Stricker’s attendance. 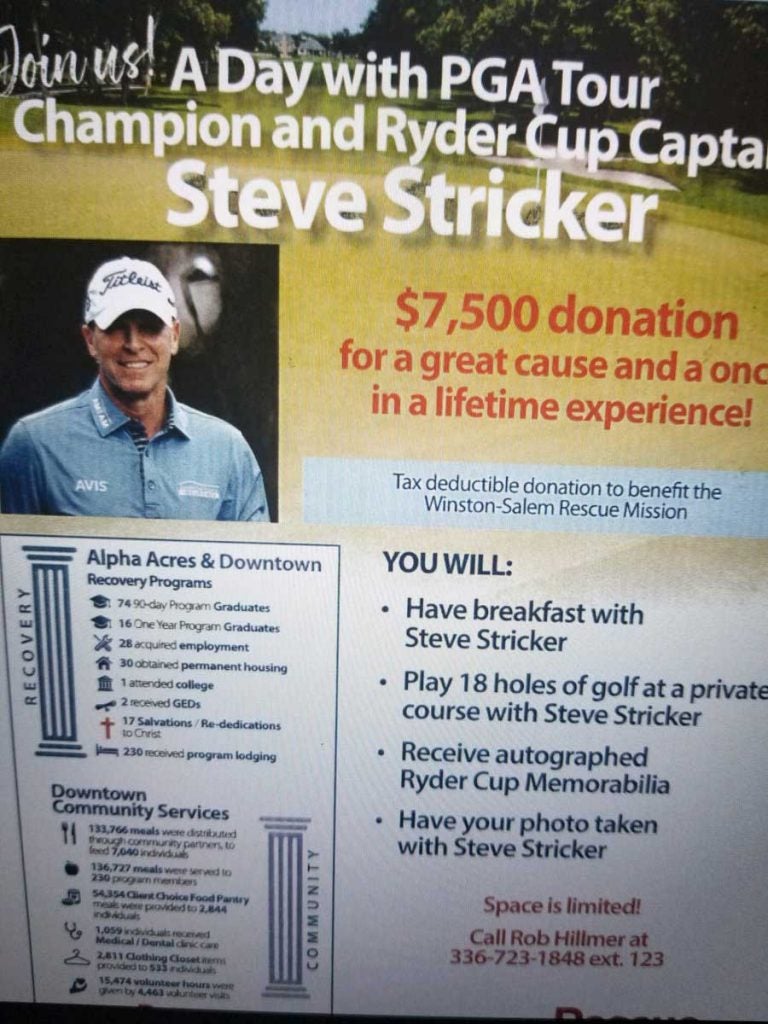 Maple Chase was to host a “meet and greet” Wednesday night, which is where Stricker’s lack of presence was first made clear. It was around that time that Stricker’s agent, Mario Tiziani, was contacted by a member of the Rescue Mission’s team. On the flyer is a call to action for donations, and for anyone interested to contact Rob Hillmer, who, according to the Winston-Salem Rescue Mission, is an event organizer.

Hillmer did not immediately respond to a request for comment from GOLF.com.

According to one of Branagan’s tweets, Hillmer said he was cousins with Stricker and that the former Ryder Cup captain would be involved. A confused Stricker tweeted in response, “I don’t know Robert Hillmer and never had any contact with him.”

When contacted by GOLF.com, Tiziani said the golfers who donated were being misled.

“Essentially somebody posed as a relative of his and convinced a group that he was coming and going to do a clinic and an exhibition and a dinner and essentially got sponsorship money to make all that happen, which is all false,” Tiziani said. “We were never tipped off on it at all, which is kind of crazy. We were saying that ‘It’s the craziest thing that someone didn’t tweet something like that.’”

Directors of the Rescue Mission have not responded to GOLF.com’s requests for comment. The web page for the event has been deleted, but a cached version of it shows Stricker was clearly being peddled as the host. 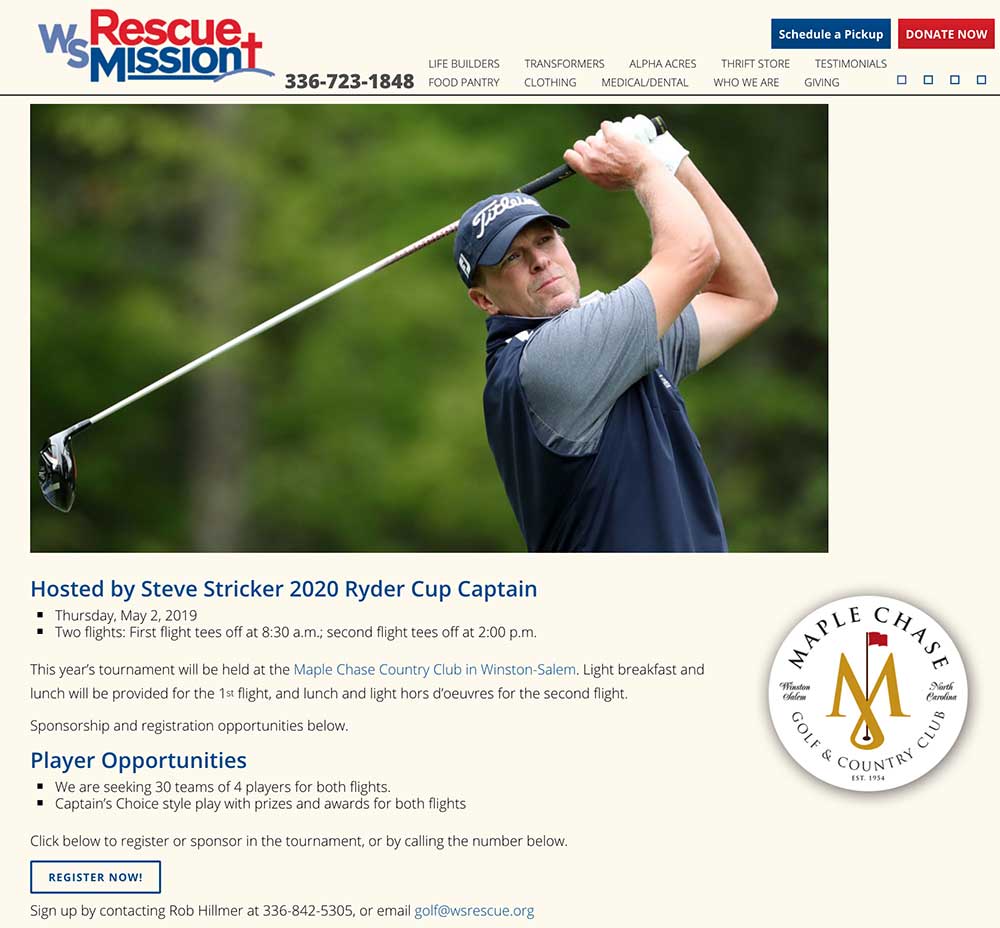 A cached version of the event's page on the Winston-Salem Rescue Mission website.
www.wsrescue.org

The event was raising money for charity through sponsorships or player packages. A $5,000 sponsorship includes the playing fee for four players and access to Wednesday night’s meet-and-greet, among other benefits. The event was seeking 30 four-player teams to take part.

“Hopefully everybody gets their money back,” Tiziani said. Stricker would later release a statement on Twitter.