‘Even with my little chicken legs’: Tiger in favor of players wearing shorts on Tour

In the days before caddies were allowed to wear shorts, Tiger Woods and caddie Steve Williams famously had a staredown with the PGA Tour regarding the rule. At the 1999 “Showdown at Sherwood,” an exhibition match against world No. 1 David Duval, the caddies wore shorts, as it wasn’t an official Tour event.

When a rules official from the Tour ordered them to change to pants, Duval’s caddie agreed — but Williams refused. Rules officials reportedly made it clear that if Williams failed to comply, he would be banned from caddying on the PGA Tour.

Woods interrupted the conversation. “Guess I’ll be playing in Europe next year,” he said. That was motivation enough for the Tour: Williams was permitted to wear shorts, and it was less than a year before the caddie shorts rule was changed.

In a Facebook Live with Bridgestone Golf on Thursday, Woods said that he supports the movement, and would welcome players being permitted to wear shorts during Tour events.

“I would love it,” he said. “We play in some of the hottest climates on the planet. We usually travel with the sun, and a lot of our events are played in the summer, and then on top of that when we have the winter months here a lot of the guys go down to South Africa and Australia where it’s summer down there.

“Also, a lot of the tournaments are based right around the equator so we play in some of the hottest places on the planet. It would be nice to wear shorts. Even with my little chicken legs, I still would like to wear shorts.” 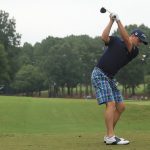 You may also like Unsure how to feel about pros baring their legs at the PGA? We’ve got you covered