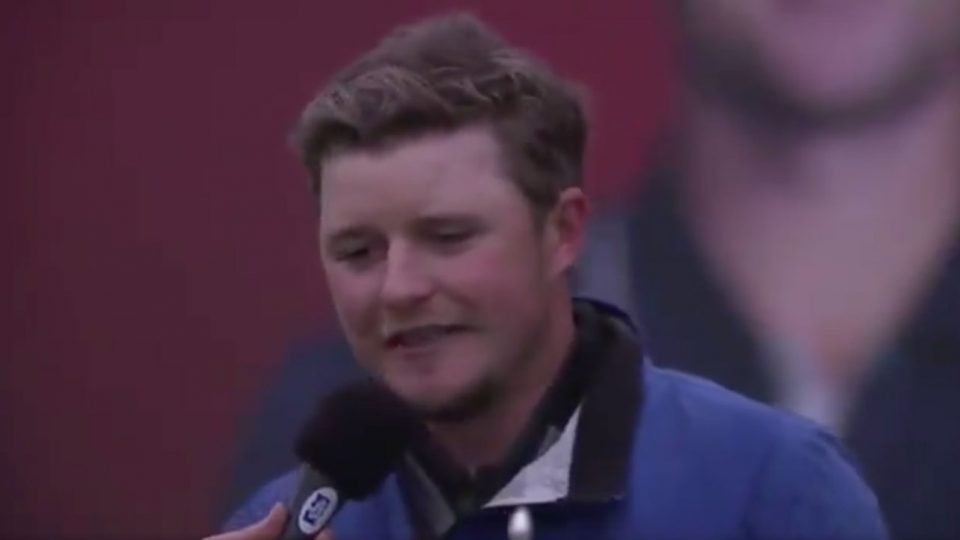 Eddie Pepperell may be the best quote in golf, and gave a series of one-liners in the wake of his British Masters win.
European Tour/Twitter

Eddie Pepperell may be the best quote in golf. He’s also turning into a heck of a player. Those two traits combined for some particularly notable sound bites after Pepperell held off the field to triumph at the British Masters over the weekend.

“I don’t know what I was feeling. Sometimes I felt confident out there, sometimes I didn’t,” the ever-candid 27-year-old said after the round. The final day was “miserable” given the conditions, but Pepperell acknowledged he was “over the moon” after winning in front of his home crowd. Here are his five best Pepperell pearls from a winning week at Walton Heath:

5. Bring me some candy — and toothpaste!

Before tournament play had even begun, Pepperell was stirring it up at the British Masters, leaving some rather specific candy delivery instructions for tournament host Justin Rose.

Is there a fruit and nut one Justin? https://t.co/14UbYkR7cI

Is there any way you could maybe get me a fruit and nut one and place it in my locker? I’m sure there’s a WHS Smith in Reigate or something. In fact, while you’re there, I could do with some toothpaste too. Colgate advanced or original will be fine. Top man Justin. 👍🏌🏼‍♂️

Justin Rose may be the proud new owner of $10 million after claiming last month’s FedEx Cup, but he’s not above a little in-person delivery. Rose tweeted his reply, showing the Cadbury drop-off at Pepperell’s locker (though no word on the Colgate).

Pepperell got tournament play off to a memorable start with a wacky first-round hole-in-one that danced around the pin before spinning into the cup. The ace sent him into the lead, a lead he’d never surrender. It also led to another drop-off from Rose, this time in the form of red wine. (Related: We know Pepperell is fond of red wine.)

Chocolate by the locker, wine in the room… @JustinRose99 top man 👌🏼👌🏼. Thanks also to Beaverbrook for the nice touch. 😁🍷 #GreatHost pic.twitter.com/ycnlzSWUm8

Improbably, another hole-out proved to be the turning point on Sunday. Facing 122 yards into the wind from the rough at No. 10, Pepperell hit a nine-iron that landed just in front of the cup and dropped in. How’d he do it? Pepperell was quick to redirect praise.

“The credit for the eagle goes to my mum,” he said. “Because she came and gave me some mittens as I walked off the 10th tee. Mums are just great for everything.”

Why Eddie credited his Mum for that amazing shot… 😂 pic.twitter.com/fqh3ts2e5V

“There were some big putts, and good job because I putted awful from 9 onwards, so the only chance I had to make birdies and eagles were to hole a shot, and that’s what I managed to do.”

3. The misery of victory

One of the reasons Pepperell said he wasn’t too nervous on Sunday? The weather was so poor he was mainly focused on “hitting it forward.”

“It was very, very miserable,” he said after Sunday’s round. “When I said ‘British weather’ yesterday, I didn’t expect it to be quite so miserable, but I’m thrilled to be stood here with the trophy.”

It wasn’t all so miserable, of course. “I am delighted, winning wire to wire, especially this event,” he told Sky Sports. “I am over the moon.” 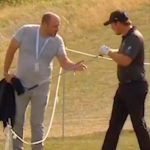 You may also like ‘He was the only one I heard clapping’: Eddie Pepperell gave his lob wedge to a superfan during a round

The win means a massive jump in the rankings for Pepperell, who is now world No. 32. As a result, he’ll almost certainly be able to punch his ticket to all four majors next year, starting with a first-ever trip to Augusta. He must be over the moon about that, too. Right?

Well, that depends how it goes. “Ask me that question in nine months, because if I struggle then I’m sure I wouldn’t have enjoyed it,” he said. Ever the realist.

Pepperell relished the home crowds all week; the Oxford native recognized that he was getting preferential crowd treatment over his nearest challenger, Alexander Björk of Sweden.

“When I holed putts I got big cheers and when Alex holed putts he got a few oohs and ahs, so it was a real privilege and pleasure to be on the end of the cheers,” he said.

One of the best parts of Pepperell’s week was the presence of his family, who joined him in celebration after he putted out on 18 for the win.

“For my family to all be here…we can all die happy,” he concluded with a grin.

Later, he posted a photo of his family, including his girlfriend Jen, with the trophy. “I have no words, only a special picture,” read the caption. Pepperell is rarely left speechless. That’s a good thing for golf fans everywhere.

I have no words, only a special picture. Thank you all so much. pic.twitter.com/oEQdgy8VhB