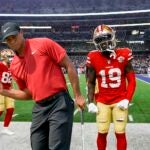 Deebo Samuel rocked a Tiger Woods mock neck under his jersey on Sunday.

To know Tiger Woods is to know the red mock neck shirt. While many weekend golfers have tried to rock Tiger’s signature look while shooting a smooth 95 with their friends, part of me thinks that the style should be reserved only for the game’s elite (read: please don’t try wearing it on or even off the course). However, it’s my job to notify you as the self-appointed Golf Fashion Police when an exception has been made.

As a die hard golf fan, there was really no reason for me to tune into the NFL playoffs — that was, until this post from TWLegion popped into my feed Sunday evening. Apparently, San Francisco 49ers do-it-all receiver Deebo Samuel helped lead his team to victory over the Dallas Cowboys whilst sporting Tiger’s famous look.

Was that actually a TW mock? It wasn’t perfectly clear. As much as I wanted to see the TW logo, I knew I was plenty biased. In fact, it looked more like Dustin Johnson’s logo than Tiger’s. But I was desperate to make the Tiger connection, so I dug a little deeper. And I’m sure glad I did. Let’s take a look at River Cracraft’s Instagram post.

Finally, a clearer image to work with! You can almost make out the TW logo here, but like a good journalist or social media sleuth, I knew the job wasn’t done. After learning that both Tiger and Deebo are signed with Excel Sports Management, I knew it wasn’t too far of a reach. But still, we needed confirmation from the man himself. And confirmation is what I got.

“I liked the turtle neck and it had his name on it,” Samuel said via Instagram DM. “He the GOAT.”

Samuel provided just another example of what we’ve known all along: respect for Tiger isn’t confined to the world of golf. And based on the role that he played in the 49ers victory Sunday, he helped prove my point from earlier: only a select few athletic elites can properly sport the red mock neck. We’ll forgive him for calling it a turtleneck.