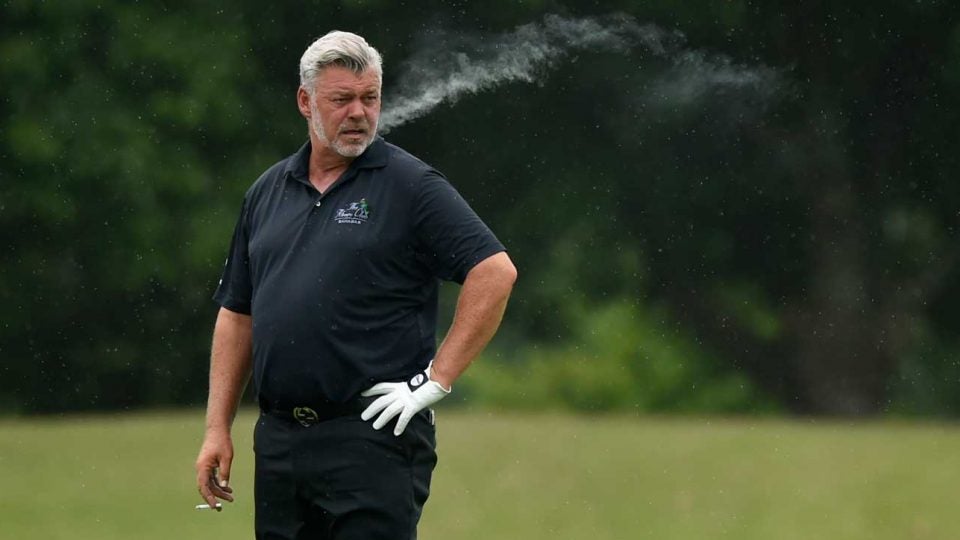 Clarke's first round at his first U.S. Senior Open was a three-over 73.
Getty Images

Darren Clarke began his first U.S. Senior Open with a frustrating first round 73 at Warren Golf Course at Notre Dame. The score wasn’t what he wanted (or needed) on a low-scoring day, but it wasn’t what it could have been because of a bizarre rules infraction by … his caddie.

Clarke had turned to the back nine after shooting one-under on the front, but flew his tee shot in the fescue trouble left of the 10th fairway. While meeting with rules officials to get a ruling, Clarke’s caddie did his best to uproot a bird feeder that was in Clarke’s line toward the green.

The @USGA ALMOST made it to July without controversy. Darren Clarke dinged for 2 for his caddie trying to remove a bird feeder. That ruling is for the birds. #punintended pic.twitter.com/xJtvnuN8za

Clarke would go on to make a bogey on the par-4 10th, but the penalty for the infraction was two stokes, adding up to a triple bogey for him, dropping him down to two over for the event.

Clarke finished his first round at three over, a brutal score on a day where scoring was incredibly low. Steve Stricker and David Toms both shot 8-under 62s. Tom Watson, ever the golfing machine, shot his age, 69, on a day where the scoring average was 71.50.