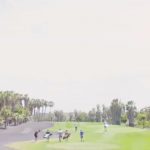 The 8th hole at Golf Costa Adeje in Spain, host of this week's Tenerife Open on the European Tour.

Laurie Canter read the yardage sign behind the tee box. Hole 8 at Golf Costa Adeje, it said in blue letters and a number, was a par-4. Check. To the right, in smaller blue: 512 meters and 560 yards.

Canter, after his initial disbelief, then played the hole.

During his practice round on Tuesday, he hit a wedge into the green. On Wednesday, an 8-iron.

“I guess with the prevailing wind that they’re going to get around here and actually given that we can cut off a fair bit of the hole, it actually hasn’t played ridiculous,” Canter said on a video released on the European Tour’s social media accounts. “… So, yeah, it’s certainly a bit intimidating on the yardage, but as a hole, it doesn’t play quite as stern as it looks on the card.”

Canter, who is tied for 21st after three rounds, has made three pars on 8. What’s his strategy?

“If you don’t take enough off to the left, you can block yourself out with the trees and the palms on the right-hand side,” he said. “So I think it’s just being brave and committing to a line. It feels like you’re hitting into the middle of a forest with the way it sets up, but actually there is room there so it’s a matter of getting your practice rounds in and getting comfortable with where you’re aiming.”