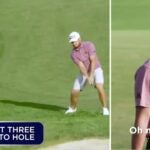 The European Tour's one-club challenge is well worth a watch.

In northern climates, the holiday season means golf’s offseason. It’s cold, dark, snowy. Courses are half-open or closed altogether. In most U.S. states, you can’t even post an official score to your handicap in December. In other words, it’s the perfect time to sneak off for a hole or nine to play a one-club challenge with a couple buddies.

But before you do, it’s worth watching some of the world’s best try it, first. The European Tour continues to churn out the very best player challenges in the world, and in this case it pitted a rising U.S. mega-star — Collin Morikawa — against European Ryder Cuppers Tyrrell Hatton and Martin Kaymer in a one-on-one-on-one one-club challenge.

The video was filmed at the DP World Tour Championship at the par-4 16th hole at the Earth Course at the Jumeirah Golf Estates. Kaymer serves as hilarious player-host while he tries to take down the too-cool-for-school Morikawa and the expressive Hatton. Morikawa draws the 9-iron, Hatton pulls putter and Kaymer is left with driver. That’s where the fun begins:

Hatton’s opening tee shot: He absolutely smashes putter off the tee. This one traveled well over 200 yards — the hole was roughly 350 yards from the tee and Hatton’s second shot came from just 123.

Morikawa’s cold top: These pros are still human, which is what these videos remind us so well. Thinning a 9-iron 180 yards is one of the few aspects of golf that Collin Morikawa hasn’t yet perfected.

Kaymer’s running commentary: Few top pros can match Martin Kaymer in front of a microphone, and it’s clear from his gleeful play-by-play just how much he enjoys the competition. “I got too excited,” he says after his approach shot. Maybe there’s a future in the booth for the former world No. 1.

Hatton’s putter flop shot: This was the most remarkable single shot of the entire video. How do you get backspin on an open-faced putter from the rough?

Morikawa’s 12-footer: Morikawa’s 9-iron may have been the best weapon entering the competition, but that club no doubt felt like less of an advantage when he faced a lengthy putt just to salvage bogey — and canned it with a fist pump.

The putter long-drive competition: We don’t want to give away the ending, so we’ll let you watch the rest of this one for yourself in the video below.

If you want more European Tour one-club challenge, check out the first two editions below — including a Matt Wallace par!