Tiger Woods added a new weapon to his bag in an effort to capitalize on Carnoustie’s firm, fast conditions: the TaylorMade GAPR LO driving iron, a newly released model that is designed to promote a low-mid trajectory for faster swingers.

Woods has often employed his dependable 2-iron “stinger” off the tee during tournament play, but this club brings something different to the table.

“I went down in loft from my normal 2 iron,” Woods said in his pre-tournament press conference at Carnoustie. “My normal 2 iron is about 20 degrees. I bent this one down about 17. So I took a few degrees off of it, just trying to be able to have the ability to chase one down there.” 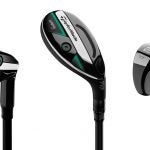 “I still carry it about the same,” Woods continued. “It goes 245, 250 yards in the air, but it gets to its final destination much differently. Obviously, it rolls out whereas mine back home, I’ve generally liked having it 20 degrees because I can hit the ball into the par 5s as an option. This one’s not really designed for hitting the ball in the air to par 5s as an option. It’s more of a driving club.”

For Woods, perhaps the club’s best feature is its versatility.

“I haven’t really been able to use it that many times out here because I’m hitting my other irons so far because of the conditions,” he said. “But if it softens up, it could be a good club. If it doesn’t soften up, then I might just add a degree to it and keep it a little softer and not have it so hot.”

TaylorMade shared a video of Woods practicing with his new GAPR LO 2-iron on the range at Carnoustie.

Nothing to see here.