Just how ridiculous is it to play 72 holes without changing golf balls?

At the 1945 Los Angeles Open, Bing Crosby gave Sam Snead a brand-new Spalding Dot. At the time, rubber wasn’t publicly available; “pre-war” golf balls were going for over $100/dozen. Snead repped Wilson at the time, but he took the Spalding and played it the entire 72 holes, even as the cover came loose, and won the tournament in the process.

In 1902, Sandy Herd showed up at the British Open with a new rubber-wound Haskell golf ball and played two qualifying rounds, then the four tournament rounds, all with the same ball. He won, too.

So Alex Chiarella’s one-ball win at the Lethbridge Paradise Canyon Open this past weekend wasn’t unprecedented — but it was a throwback to a different time. Chiarella, 25, shot 20 under over four rounds to capture his first Mackenzie Tour win, using a Titleist 1 the entire time. Friday night, Chiarella considered putting in a freshie.

“I looked at my buddy who I was staying with that night and said, ‘Man, I have some good mojo with this ball. Would it be weird to keep this going on the weekend?'” Chiarella told the PGA Tour. “He said, ‘No dude, tee it up tomorrow.’ There were a few scuffs on it, so I did it. I played with it on Saturday and then asked him the same question Saturday night, and he’s like, ‘Dude, there is no way you’re putting the ball out of the bag. Tee that thing up in the morning.'”

Chiarella’s Sunday 68 with the same Titleist 1 earned him a one-shot win, bumping him to third on tour’s Order of Merit, temporarily inside the top five to earn Korn Ferry Tour exemptions for 2020. 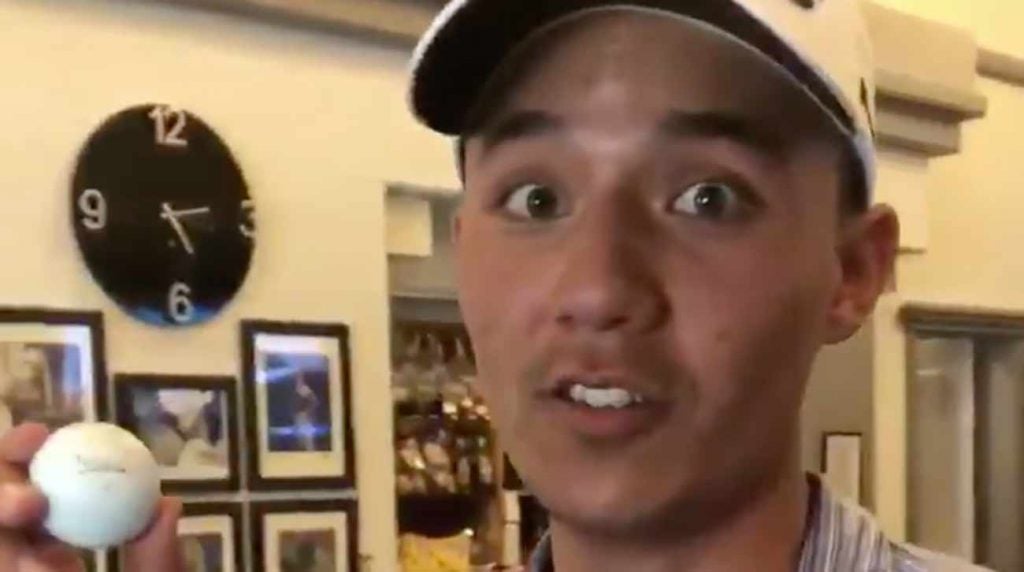 Simply put, this never happens in the modern world of pro golf. Even on golf’s mini tours, new balls are valuable currency for obsessive pros, who have no patience for flaws in their swings nor their equipment. Titleist reps will drop into Mackenzie events on Mondays or Tuesdays bearing fresh pearls, two dozen per Titleist player. Many aspiring pros will choose ball loyalty this way; which ones come for free? Top-shelf golf balls run some five bucks a ball, so they’re worth conserving (during this author’s time on the mini-tours, most of my net worth was in hoarded golf balls). But even at that level, most pros will use a few balls per round.

On the PGA Tour, change happens far more often. There’s no limit to how many golf balls a player can carry in his or her bag, so long as they comply with the One Ball Rule, which dictates the same model and manufacturer. Rich Beem used to play with a new ball on every hole. Ernie Els believes there was only one birdie in any ball. A PGA.com piece in 2017 asked golfers how many balls they carry per round. Russell Knox said he carries nine, Gary Woodland brings 11. Padraig Harrington would bring as many as a dozen, if he was playing a course with wedges and water.

For the average golfer, the biggest reason to change balls is out of necessity — a 2009 GOLF Magazine study found that even avid golfers lose 1.3 balls per round. For pros, it’s more about conditioning. In 1899, golfers playing the new gutta percha found that it flew shorter than a feathery, but a nicked, scratched ball would fly up to 60 percent farther (inspiring dimple technology in the process). That’s not the case now. Most golf balls have soft covers to maximize feel, and most pros have clean grooves and high swing speed, meaning every short iron or wedge compression can result in a scuffed ball.

So Chiarella went distinctly against the grain with his scuffed-up ProV1, but it was a free-thinking revolution that took him all the way to the winner’s circle. Maybe that mojo is worth something after all. By Sunday’s end, he’d adopted a simple philosophy on the matter.