LA QUINTA, Calif. — When a new driver comes out, PGA Tour players are just like the rest of us; they want to test it against their gamer. The problem is, when a large portion of players in a 156-player field want to try the new product – such as the Callaway Mavrik metalwoods that launched on Tuesday — things can get a bit crazy.

Every week, fleets of equipment trucks travel from event to event on the PGA Tour. They exist for the sole purpose of getting PGA Tour players dialed in with the best-performing equipment possible.

The vibe inside those equipment trucks varies from week-to-week. During some events, club builders have their hats low, focused on getting specifications perfect for top players. Other weeks, when few changes or tweaks are being made, the hats turn backward and it becomes a more relaxed atmosphere.

But launch week of a new driver is an entirely different beast, however.

On Tuesday at The American Express, during Callaway’s Tour launch of its new Mavrik metalwoods, I sat inside the Callaway truck to witness exactly what launch week looks like. I also spoke with Kevin Napier, the man who builds Callaway’s metalwoods inside the hulking trailer, on the chaos of it all. After years on the job, and being a part of many different launch days, Napier is used to the craziness. Yet from my perspective, as a first-timer dealing with launch day on a Tour truck, it was enough to make my head spin.

Napier says the secret is doing his homework prior to the actual day of launch. 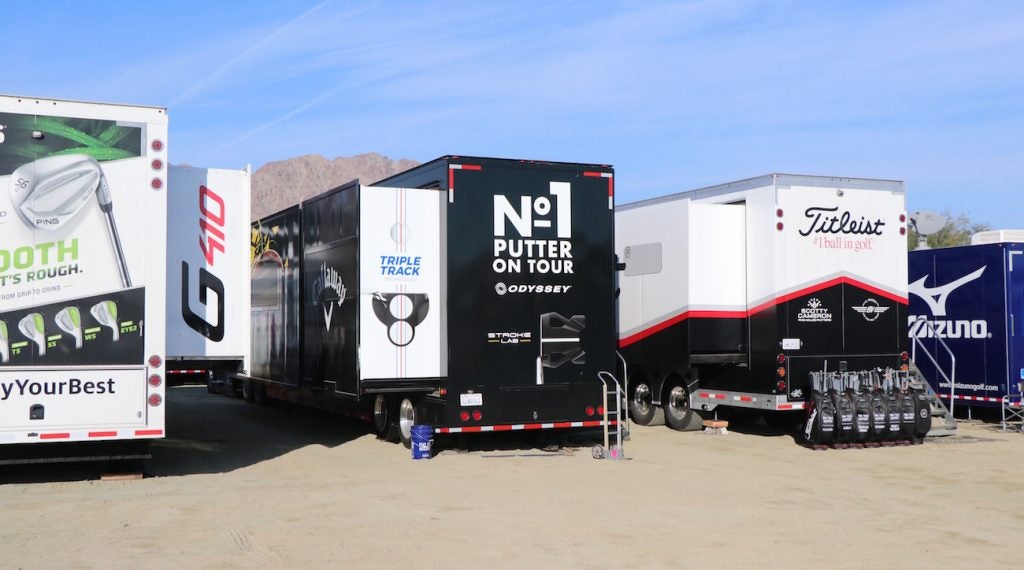 Tour trucks from different manufacturers set up in a parking lot near the putting green and driving range for quick access.
Andrew Tursky

“We make our best-educated guess to what we think a player is going to need, as far as loft, weight, the look of the driver that they want to see,” he says. “The more homework you do before – if you have stuff weighted up and ready to go – a lot of times the easier it is for your fit to go more smoothly.

“Building-wise, it’s hectic, but it’s just steady. It’s not crazy crazy. You’ve done it for a little while, then you know what to expect. You know what players are in the field. So it’s not too bad.”

Johnny Thompson, Callaway’s club fitter on Tour, was running — that’s only kind of an exaggeration — between Callaway’s truck, situated on top of a hill, and the range at the base of PGA West’s Stadium Course. (I’d love to see Thompson’s FitBit stats for the week.)

Thompson’s task is to find the ideal club setup for each player and to make sure they get exactly what they need. If a player wants weight added to a club head, a different shaft, or an entirely different build, Thompson delivers. 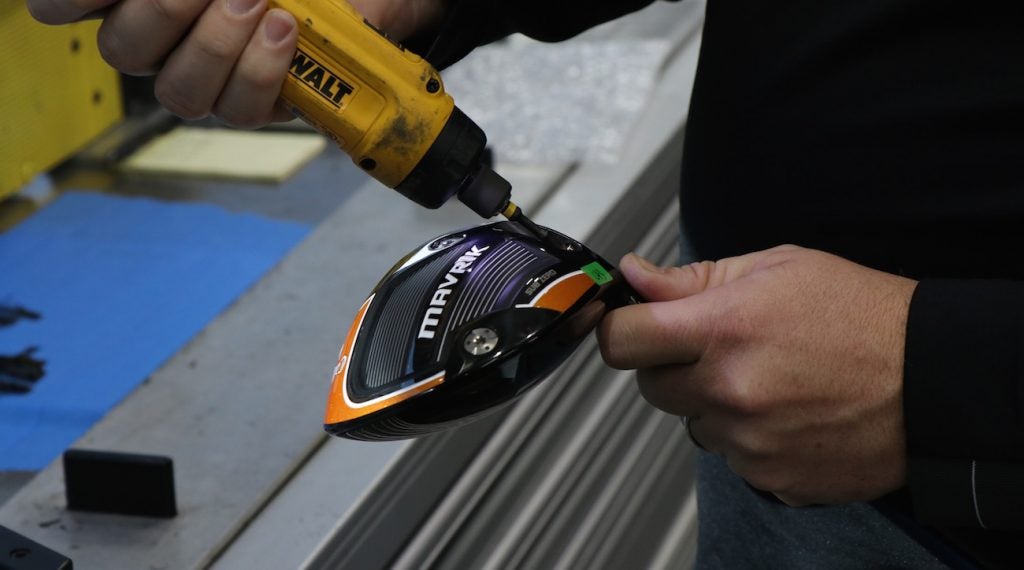 Napier attaches a custom Mavrik head to a shaft for yet another Tour player.
Andrew Tursky

Napier, for his part, is constantly building new clubs. He bends clubs to the right lie angle and loft, applies lead tape, makes hosel adjustments, adds hot melt to the heads, attaches shafts, and once he has a driver built up just perfectly, he gets working on the next driver.

While Napier is building away and Thompson is fitting players, Tour reps from different shaft companies steadily flood into the truck to learn about the new product and how they can best marry their line of shafts to the new heads.

Then, of course, players and caddies file into the truck either to hang out and shoot the breeze or make an adjustment to their gear.

Throughout all of the chaos, I found myself getting lost in the true goal of it all, which is to get a club in the hands of a player that performs better than what they’re already using.

“If we can dial the players in, and they get what they want, then it works for both of us,” Napier said. “We want them to see better numbers compared to last year’s stuff. Then everybody’s happy.” 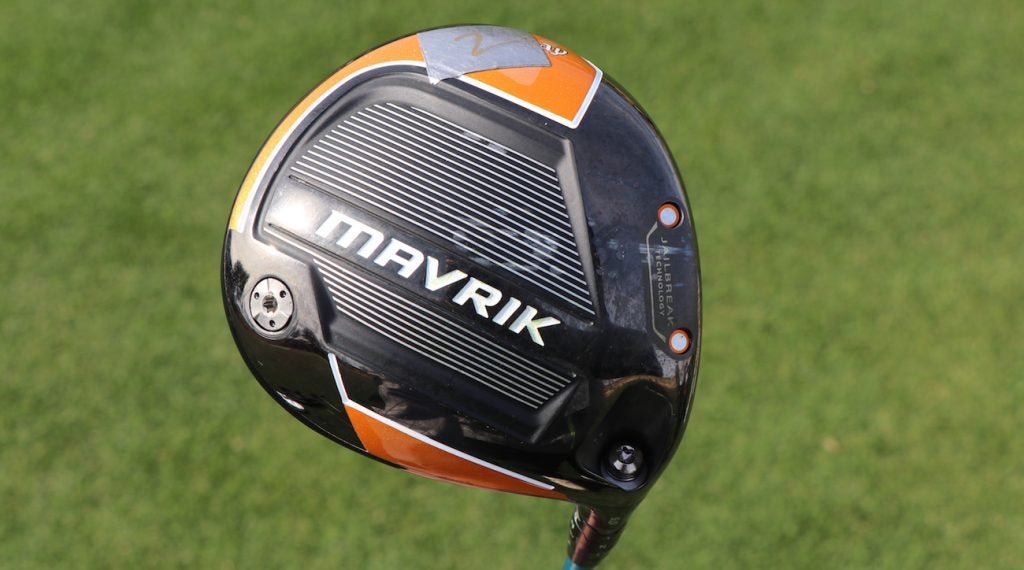 Kevin Na's Callaway Mavrik driver has a bit of lead tape added to the toe section to keep the ball from drawing too much.
Andrew Tursky

Kevin Na is among the golfers leaving happy with a new Mavrik driver. After seeing the new product and working with Thompson in a testing session, Napier says that Na picked up three mph of clubhead speed and three mph of ball speed.

“Na was hitting a 2017 Epic standard driver,” Napier said. “He broke his contract with his previous sponsor to play that driver, so he liked it a lot. He’s won a few tournaments with that driver since. He tested with a 9-degree Mavrik yesterday and saw 3 mph faster swing speed and 3 mph faster in ball speed. Another nice little thing is, sometimes when you see shots hit across the face, spin will jump up and down. You might see a difference in 300-400 rpm depending on hit location, but you didn’t see that with him with the Mavrik. The more consistency you can see, the better. So that’s nice.”

Sometimes, though, players test new product but remain reluctant to make a switch.

“It happens a lot,” Napier said. “A lot of it is just that guys getting comfortable and trusting the driver. You know, the good ones are going to be good. It’s the misses that they worry about. They’ve hit a certain driver for eight or nine months, and they know their miss. The good ones are always going to be good with the new stuff, but they want to be comfortable with the miss.” 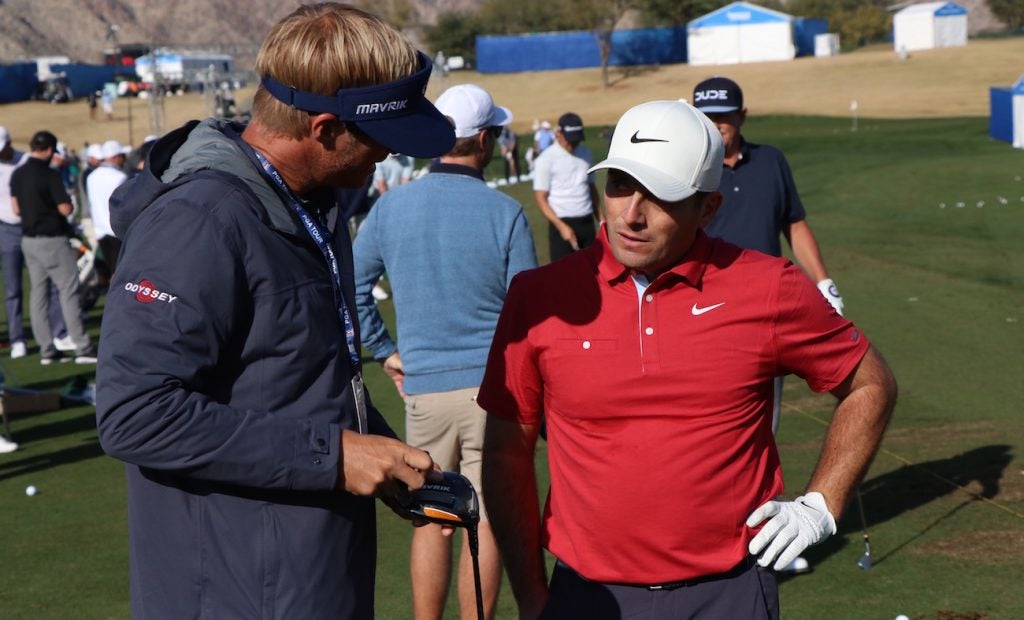 For instance, I sat in on a testing session between Thompson and Francesco Molinari. They were going back and forth with different shafts in a Mavrik Sub Zero “Three Diamond” prototype head, capturing every swing on Trackman. On average, Molinari was picking up 2-3 mph of ball speed, and he was seeing better forgiveness, according to Thompson.

After the session, however, Thompson was only “50 percent sure” that Molinari would make the switch, because he needed time to get comfortable. After nearly seven weeks off of competition for Molinari, and living in London where the weather isn’t ideal for club testing, Thompson said Molinari might need more time to get the new driver on the course. For some, it takes time for a driver to earn enough trust to go in play for competition.

In total, Napier said he built about 20 new clubs on Monday alone. He said he expected about the same workload on Tuesday and Wednesday.

By the time the tournament begins on Thursday, and players all have their Mavrik drivers in competition shape, Napier and Thompson will be long gone from the premises. They’ve already done their job, but they’ll be back next week at Torrey Pines to help a new crop of players get fit for Callaway’s Mavrik products.