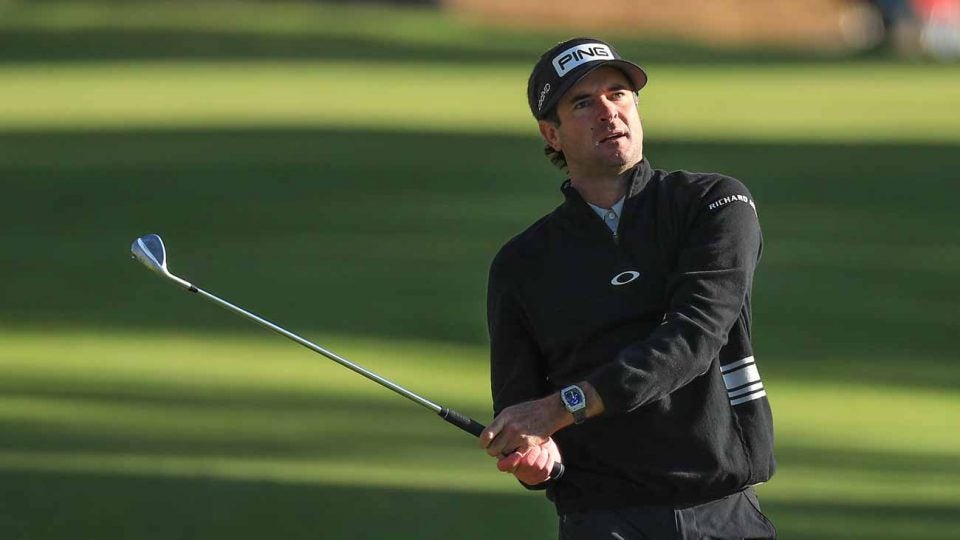 Bubba Watson hits a shot during Thursday's first round of the Genesis Invitational.
Getty Images

“Is it too late now to say bogey?”

Or maybe, just maybe, “Cause if you like the way that green breaks that much, oh baby you should go and putt yourself.”

With a free weekend after missing the cut at the Genesis Invitational at Riviera Country Club, Bubba Watson teed it up Saturday with pop sensation Justin Bieber and friends at another course in the Los Angeles area – and one could only dream of the potential of Biebs remixing his chart-toppers “Sorry” and “Love Yourself” with a golf theme.

“Fun golfing with the boys!!” Watson tweeted late Saturday night under a photo of him with Bieber and other friends. The Twitter account “Justin Bieber photos” (@BiebernewsHQ) also tweeted photos of the round. (Because this is a golf site, it appears that Bieber prefers to putt with his right hand below his left, along with playing with a yellow ball.)

Watson has been a Belieber for a while.

He told E! News in 2012 that Bieber was the only person he talked to on the phone after his 2012 Masters win. In 2016, Watson tweeted a photo of Bieber teaching Watson’s son Caleb how to play the drums. And Watson told Access Hollywood in 2015 that he has helped Bieber deal with superstardom.

“Crazy story. I have a friend, a pastor up in Seattle, Judah Smith (who was also part of Saturday’s golf outing), and I helped start a little church here at the Montage every Wednesday night, and so I’d kind of run into Bieber through Judah Smith, and we just started talking, just trying to help him,” Watson said. … “We all have issues we’re going through … and I tried to give him guidance … on how to deal with success.”

And Watson once fancied himself a potential boy band member, teaming with Rickie Fowler, Ben Crane and Hunter Mahan to form Golf Boys. And, yes, Watson once wanted his famous friend to help.

“There’s no [boy band] competition for us,” Watson told TMZ Sports in 2016. “But obviously I love Justin Bieber. I’m trying to get him to join the band but he’s not doing it right now.”