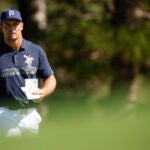 Bryson DeChambeau spoke to the media on Thursday and covered a number of topics.

Bryson DeChambeau spoke to the media on Thursday. That in itself is noteworthy; other than the Ryder Cup and The Match, DeChambeau hasn’t taken questions from reporters since last summer, when he began declining post-round interviews. Like with most decisions in his life, DeChambeau did the math. He decided the benefit wasn’t worth the risk; his words were too often used against him, he said. He prefers to control the message.

On Thursday, DeChambeau’s video chat came as part of his upcoming appearance at the Saudi International, where he and several other of golf’s biggest names are being well-compensated to play in two weeks’ time. On the complex ethics involved in that tournament appearance, DeChambeau was tight-lipped. “I’m not a politician,” he said. “I’m a golfer, and I want to play where the best golfers in the world are going to play.” That was that. By contrast, DeChambeau was loquacious on nearly everything else, from his choice in hats to wrist rehab to his hopes and dreams. This was clearly a guy with a lot to say.

“Sorry for the long answer,” he said at one point. An apology no journalist has ever needed.

(Full disclosure: DeChambeau is a playing editor for GOLF.)

As it often does, one clumsy comment of DeChambeau’s quickly made the rounds after the interview concluded. Asked why he’d declined the opportunity to appear on the PGA Tour’s new Netflix documentary series, DeChambeau said he didn’t want to “take the light away” from lesser-known Tour pros who are “already pretty far behind” when it comes to brand-building. The fact that it was both true and well-intended didn’t really matter; his phrasing made it sound like a strange put-down.

This often happens with DeChambeau at the mic. When he’s speaking too carefully, when he’s actively trying to say the right thing, that’s when he tends to get it wrong, like a golfer with one swing thought too many.

But listen to a different part of the same Netflix answer and you’ll get a different impression, not just of the answer but of the man giving it.

“I feel like people are seeing me on YouTube, Instagram, and they’re getting a pretty dang good look inside my life,” he said. “And to have more people come in and go even farther, which is almost impossible for what I’m giving out, is just overall too invasive for me. I didn’t really want any more than that because I do have to have a life outside of it.”

That’s the whole deal right there. That’s the carousel of fame on which DeChambeau is going ’round. Many people have gotten access to his life; that’s uncomfortable. People have strong opinions about him; that’s uncomfortable too. Sharing more comes with risks. It comes with an invitation for others to pass further judgment. Sharing leads to positive feedback but to the negative kind, too, and the negative stuff is tougher to vanquish from your mind. The entire cycle is invasive.

DeChambeau is a gaffe-prone interviewee, which is especially tough in this viral era. It also obscures the flip side: he can be an insightful talker, too. On Thursday, DeChambeau was at his most interesting when he spoke about expectations. It was a reminder of the value of him talking to journalists who ask interesting questions: he gives interesting answers.

He remembered the November Masters, the first time he noticed just how much attention he was being paid.

“I had so much pressure on me, and it was definitely a different feeling that everyone was watching me and seeing how I’m going to play the golf course and whatnot,” he said. “That definitely threw me for a loop.”

The attention cycle DeChambeau described was nearly crippling. He noticed the skyrocketing expectations. He heard the believers and he heard the doubters twice as loud. He felt people were out to get him — in the crowd, in the comments, in the media.

“It became a lot on a human being,” he said. He reminds us often of his humanity — he uttered the phrase “we’re all human” four different times during the interview — which suggests he thinks that the world needs reminding. “It’s amazing what people can do when they tell you you’re this all the time or that all the time when you know it’s not true personally in the background.”

DeChambeau acknowledged he brought plenty of the scrutiny to his own doorstep. But he didn’t understand why he wasn’t given the benefit of the doubt when he felt his contributions — to golf, to entertainment, to charity — outweighed any shortcomings. He felt like golf had turned on him.

“It was just very disappointing for me to feel like I was just getting hammered all the time. I was just like, you know what, I don’t really need this anymore,” he said.

He described the low point as the moment he got Covid-19 in the summer of 2021 and missed the Olympics. “I was quarantined at home, stayed inside, the whole thing. It was just a very, very sad moment in my life.” His next appearance was at the FedEx St. Jude, where his week began with a muddled set of remarks on vaccines and finished with a back-nine stumble on Sunday that left him without a chance. Nothing went according to plan.

That was the week he stopped speaking to reporters. It was enough that Tour rounds lacked mulligans; press conferences did, too. DeChambeau figured he could control his message better with the benefit of editing. So he didn’t step out of the public eye; quite the opposite. He worked to build his YouTube channel, which has 232,000 subscribers. He has joined forces with several friends to form Regecy, a new channel of its own. He’s flooding the zone with DeChambeau. His subscribers get hours of access; scan the comments and you’ll see it’s an overwhelmingly positive corner of the internet.

“If people are going to push me that way, I’m going to retract, and I’m going to be able to produce my own content on YouTube,” he said. The platform has its advantages: He can show off his life “behind the scenes and give a very good story and good version of who I exactly am, the truthful version of who I am and who I want to continue to be.

“I’ve always been up front and honest. Yeah, I get frustrated and I get mad. Yeah, we’re all human. But at the end of the day, me giving myself on YouTube and whatnot is showing a side of me that not very many people get to see every day because that’s who I actually am behind the scenes.”

You could make the argument that only showing the “very good story and good version” of someone is different than showing their “truthful version.” I’m not sure that DeChambeau would agree with you. But it’s all connected: the criticism and the Netflix answer and the YouTube channel, too. DeChambeau is a guy who likes to control variables. Netflix would prefer to control its own. Golf fans have their opinions, too.