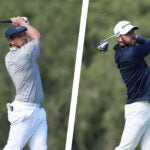 It was a bomb show on the 9th at Winged Foot Sunday.

Just when you thought the U.S. Open was a free-for-all, and that there was a big group of players in the hunt, Bryson DeChambeau and Matthew Wolff reached the 9th hole.

The two leaders had quietly started struggling a little bit, making it seem like everyone around even par might be in great shape. Both DeChambeau and Wolff bombed their tee shots on the 9th, just like they’ve done all week.

DeChambeau’s tee shot went 374 yards. Wolff raised him with a 388-yard bomb. They both hit wedges into the par-5 green — Wolff’s much better than DeChambeau’s — and then hit their putts.

Both went in for eagle.

DeChambeau was first, from 39 feet, down the hill and banking left toward the hole. Right into the center.

As you may have noticed, there was no roar from the crowd, because there is basically no crowd. DeChambeau’s bomb pushed him further into the lead as Wolff lined up his putt from 10 feet. You already know the result.

I guess that’s a double eagle. A real double eagle. It was Wolff’s first under-par score on any hole on the front nine, helping him turn in 36. DeChambeau turned to the back in 33. Game on.