Brooks Koepka is a major hunter. Everyone seems to know that. The 29-year-old has absolutely controlled the major championship landscape over the last two years, rocketing up the World Ranking as a result.

There remains an infamous caveat to that success. Koepka can’t quite nail down the non-majors. In the past he’s cited a lack of focus or stamina during non-major weeks, as well as his seven second-place finishes as evidence for his few Ws.

As a result, Koepka’s No. 1 ranking exists not entirely but in large part because of his major finishes. Koepka has earned a ridiculous 65% of his ranking points via majors. Now, majors are given greater value with more ranking points to dish out, but the average of the top 50 in the world comes out to 19.72%, roughly 30% of Koepka’s ratio, and that includes his tally. Without Koepka included, the margin only grows. 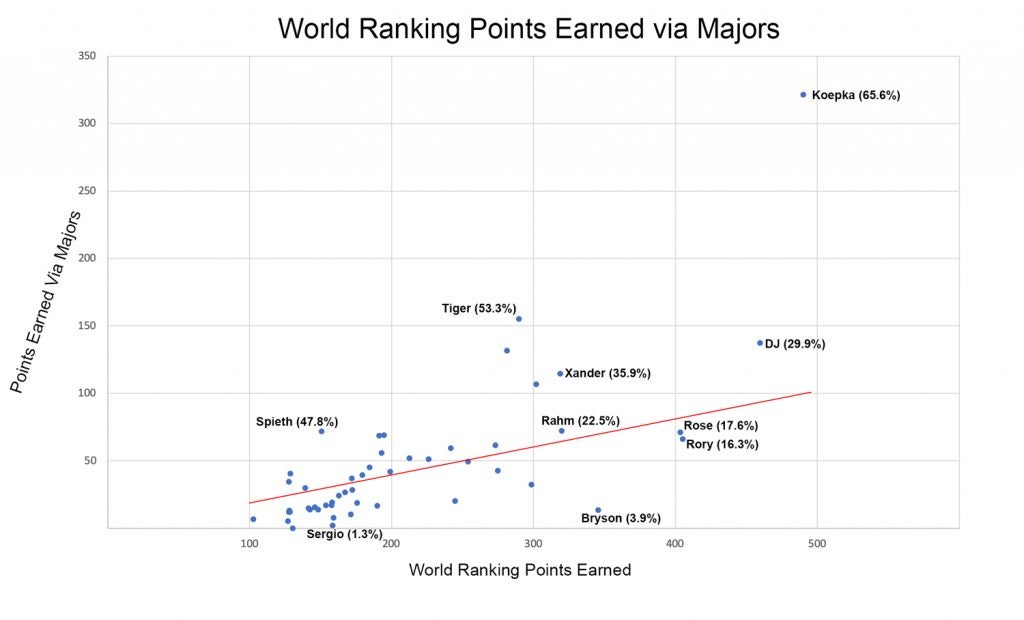 While much of the Top 50 sit around the average mark, some outliers serve as a reminder that not all rankings are made equal.

This chart isn’t all too surprising, but it does pinpoint some wild outliers. Koepka is one of them, but perhaps just as impressive as Koepka’s ratio is Bryson DeChambeau’s.

DeChambeau is ranked No. 6 in the world, and has done so almost entirely on non-major events. DeChambeau has, at the moment, just 13.42 points to his name via his finishes in majors over the last two years. The next lowest amount comes from Kevin Na, ranked 34th in the world. But with four Tour wins in the last 14 months, DeChambeau has been a fixture in the top 10 for the last 44 weeks.

Other outliers include Sergio Garcia and Jordan Spieth. Oddly enough, Garcia is ranked just one spot (35th) ahead of Spieth (36th), and while both have struggled in the last two years relative to their normal level of play, their performances have differed greatly in the majors. Spieth’s world ranking is comprised of a near 50-50 split, with 47% of his ranking coming from solid, non-winning major performances.

Garcia has been dreadful in the majors, missing seven straight cuts before finishing tied for 52nd at the U.S. Open at Pebble Beach. He has kept a respectable world rank via seven top-10 finishes (including one win) on the European Tour in the last year alone. Add that to a pair of PGA Tour top 10s and you’ve got much more consistency than Spieth … and even Koepka. The latter did himself no favors in his two starts since his recent second-place finish at Pebble. Koepka finished T57 at the Travelers Championship a week later, and then 65th last week at the 3M Open in Minnesota. He’ll have another major opportunity in just one week at The Open Championship.