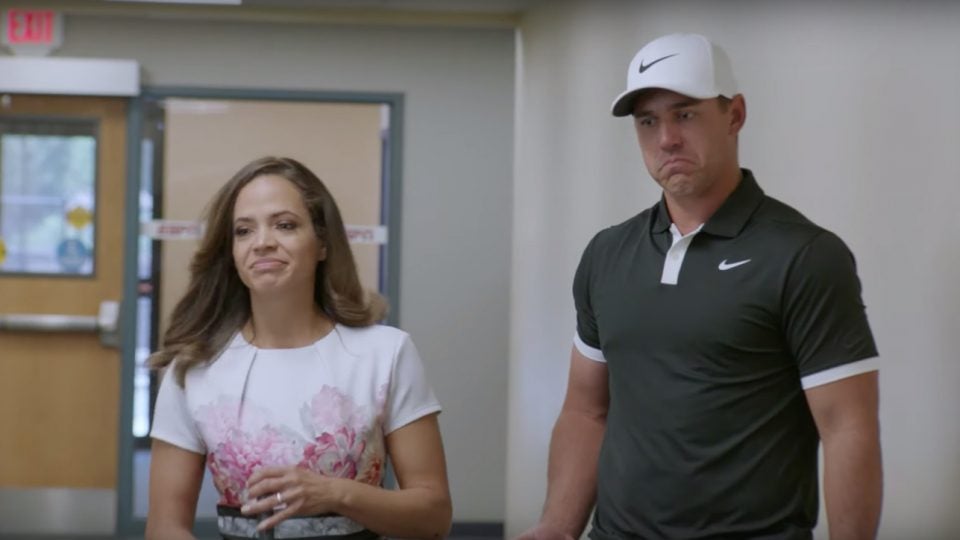 Brooks Koepka starred in not just one, but two 'This is SportsCenter' commercials released Friday.
https://www.youtube.com/channel/UCi65PT5WuwIce3WA0rz17mg

Brooks Koepka is the man of the moment in golf — so much so that he earned the exclusive invite to take part in ESPN’s classic “This is SportsCenter” commercial series. Better yet, one spot was not enough.

Koepka stars in two new commercials, both of them released Friday morning, but if we’re being honest, they both leave us asking for a bit more. While any ESPN golf commercial should be met with applause — the sport doesn’t always receive the most love — the Koepka ads need more Koepka! On the spectrum of golfy “This is SportsCenter” commercials, it’s going to be difficult to rank Koepka’s pair highly, if only because there’s a high bar to clear. Getting Arnold Palmer to show off how he truly makes an Arnold Palmer is tough to top.

For now, let’s start with the better of the two, “Hallway Putts.”

Perhaps this would be better named “Hallway Putz,” to make note of Matt Barrie’s foolish move to pick up Koepka’s mark. Regardless, this bit wins on the merit of brevity. It’s short and sweet and golfy. Check, check, check. But in that shortness and sweetness, the commercial feels a bit too simple. Nothing about it seems to pertain to Koepka himself. One could substitute in any known golfer and it would still work. Bubba Watson, Justin Thomas, Tommy Fleetwood — the bit doesn’t change, which makes it fun and golfy, but devoid of Koepka’s personality.

Remember, this is the sometimes enigmatic, prudent Pace of Play king, who crushes majors and takes no prisoners. He also isn’t afraid to show off his body, either in print or on the back of a boat. Give us more of that Koepka we know!

All in all, the gimmick is still funny. The pace of Barrie whipping around to snag some loose change is sound. We’ll give it a 7 out of 10. Hopefully whatever Barrie grabbed out of the vending machine was worth it. Now, on to the clunker of the two, “Putter Wipe.”

Putter Wipe falls short where Hallway Putts does. It needs more Koepka! I need more Koepka! Yes, Brooks always wipes his putter before he takes a stroke, but so does Jordan Spieth, and so do many other Tour pros. Some of that unique Koepka flair is lacking once again. And if we’re nit-picking, and if the putter wipe (knife wipe) is the catch here, perhaps we could have drawn it out a touch more to really emphasize the point. It felt too quick!

Secondly, where is his actual caddie, Ricky Elliott?! I’m sure there’s a viable reason for his absence — he and Koepka are best friends — but Elliott is replaced by a stand-in Koepka caddie who definitely feels like a placeholder. In fact, it’s one of Koepka’s longest friends, Dan Gambill. Perhaps the production staff didn’t want to force a bad read on Elliott, who has been a stellar caddie for Koepka for most of his entire career. For all of that, we dish out a 3 out of 10.

As a reminder, these ratings are strictly on a scale set by past SportsCenter commercials. It’s a brilliant video series that has produced some terrific golf commercials. Think: Jordan Spieth waffling between spoon or fork for his mac ’n’ cheese. Or a full Tiger Woods gallery traipsing through ESPN’s cubicles. There was a lot of potential with Koepka, and these didn’t quite live up to what we were hoping for.