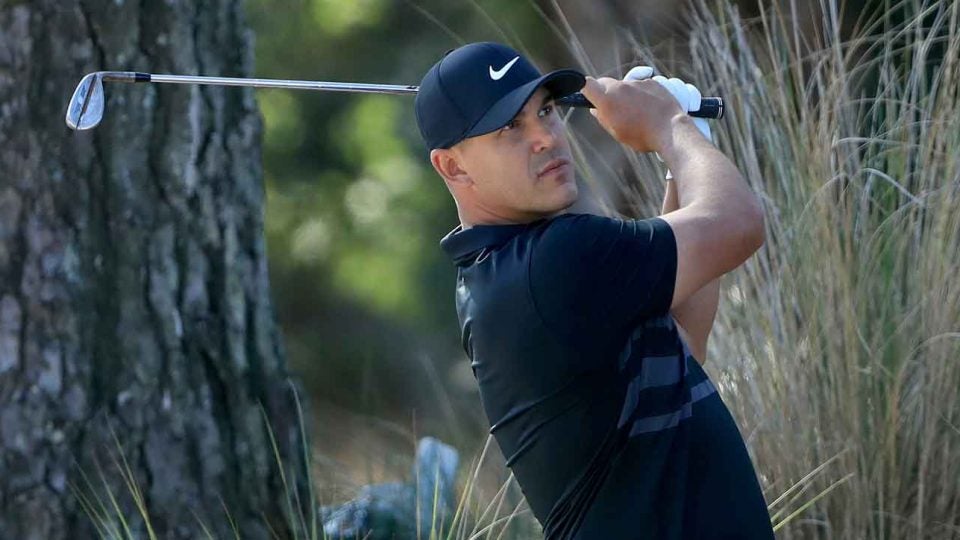 Brooks Koepka during the first round of the Players Championship, the last round before the PGA Tour went on hiatus due to the coronavirus.
Getty Images

Shortly after last year’s Tour Championship in late August, Brooks Koepka underwent a stem cell procedure on his injured left knee, and in mid-October at the CJ Cup, he re-injured it. Koepka said it probably would be a year “before it feels completely normal again.”

About a year would fall right around August. September. November.

“It still doesn’t feel perfect,” Koepka said Sunday during a Nike Golf Instagram Live video with Michelle Wie. “You can still tell something is not 100 percent. But that’s what every injury is – my wrist is the same thing. But I trust it. It feels good. I can do everything I want to do on it. So hopefully it’s a little bit of a blessing in disguise.”

Koepka admitted his play when he returned in January was “so bad.” Before the first round of the Players Championship in March – the last round before the PGA Tour went on hiatus – he had shot seven straight rounds in the 70s, including a career-worst 81 at the Arnold Palmer Invitational. But a little tough love from legendary coach Butch Harmon – the father of Koepka’s swing coach, Claude Harmon III – seemed to have worked.

“I went out, worked with Claude, wasn’t really listening to Claude. That was kind of my own fault – I was kind of doing the things that I thought I needed to do, which was the complete opposite of what we’ve done the past six years,” Koepka said.

“Went out to Vegas, saw Butch and he told me the same thing that Claude was telling me and just kind of got in my ear a little bit and sometimes you need to have those people around — you don’t need to have yes guys around. … So once I finally bought back into it, it was starting to turn around.”

And that could put him in a good spot come August, September and November.

Expect that November Masters to be “way different,” Koepka said. Obviously colder. He also assumes it will be a little wet, so the ball won’t roll as far. He said shots could require him to go down 2-3 clubs.

“So it’ll be quite interesting to see,” Koepka said. “Even what the score is going to be. Whether even par will be a good score. Augusta, usually if you shoot 2-, 3-under, that’s pretty good, but you can really shoot 6-, 7- 8-under if you get going really hot, but if it’s cold like that, who knows?”