Brooks Koepka eagles 72nd hole to cap off CJ Cup win, will ascend No. 1 in world

When golf’s official world rankings come out on Monday, there will be a fresh name atop the list: Brooks Koepka is the No. 1 golfer in the world. Koepka’s walk-off eagle at the 72nd hole gave him a four-shot win at the CJ Cup at Nine Bridges. In the process he will supplant his good friend Dustin Johnson at No. 1.

Koepka’s coup came in the dead of night in the U.S.; the time change from South Korea meant that the tournament wrapped up just after 2 a.m. in Koepka’s home state of Florida. It was a fitting way for Koepka, golf’s perennially underrated superstar, to take over the world’s top spot.

But there was nothing understated about the way Koepka surged to the finish on Sunday. He entered the day with a four-stroke lead, but that lead evaporated when Koepka bogeyed two of his first four holes as his competitors took advantage of Sunday’s favorable scoring conditions. Even as Koepka bounced back with birdies at 5 and 6, Gary Woodland surged with four consecutive birdies of his own. 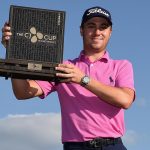 Birdie runs were the story of the day. Ryan Palmer mounted an incredible late charge with seven consecutive birdies to finish his round, a 10-under 62 that left him in solo third. Woodland birdied 6 of 7 holes to close his front nine and then birdied 5 of 7 holes to close his second nine as well, capping off an 11-birdie barrage to post 17 under.

That wasn’t enough to keep up with Koepka. Every time Woodland rolled in a putt, Koepka answered. After a disappointing three-putt par at No. 9, Koepka caught fire. He birdied 10 and 12, then nearly holed his tee shot at 13, setting up another kick-in birdie. As Woodland drew close, Koepka birdied 15 and then chipped in for birdie at 16, too. By the time he reached the 18th tee his lead was back to two shots.

Koepka finished with a flourish, finding the green at the finishing par-5 and setting up a 20-footer for eagle. He poured that in with a subtle fist pump and a smile, capping off a 7-under 29 on the way in.

Koepka’s final-round 64 featured two bogeys, eight birdies and an eagle, and he finished four shots clear of Woodland. Rafa Cabrera Bello’s 65-65 weekend left him tied with Palmer in 3rd place. Ian Poulter, playing in the final group with Koepka, drew within one shot early on but struggled to finish off his round and finished T10 at 10 under.