British Open’s Best Seat in the House: Inside ‘Blackrock House’ at Royal Troon 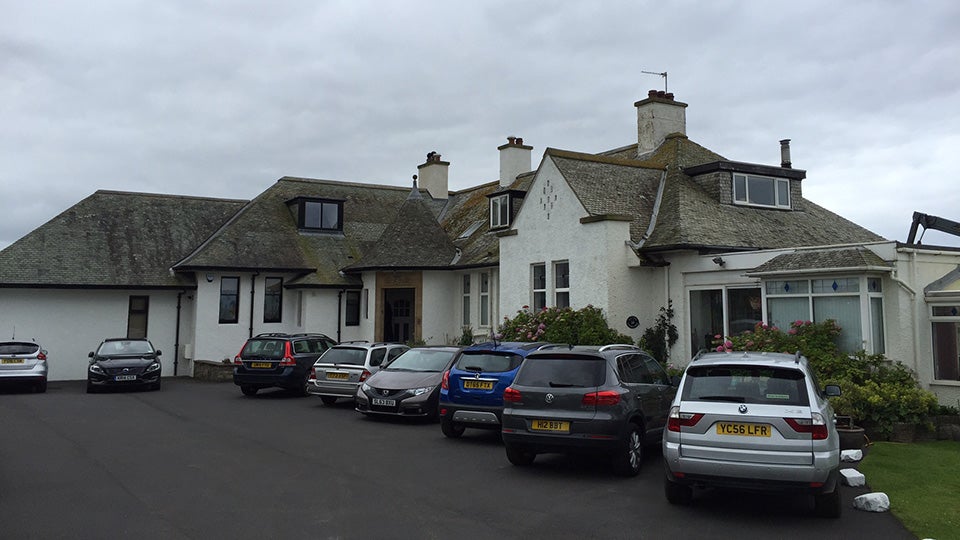 TROON, Scotland – The flat linksland at Royal Troon has many outstanding spots for spectating. The tall bleachers behind the tee at the 8th hole Postage Stamp are terrific. The quiet corner behind the 11th green is serene, when the trains aren’t running. And the 18th hole grandstands, under the iconic yellow scoreboards, are filled with energy and anticipation of a championship moment to come.

Gregory is the owner of what’s come to be known as Blackrock House, the famed private residence that sits squarely inside Troon’s gates, between the 2nd and 16th greens. The official address is 16 Crosbie Road, and it’s hard to imagine a private home on any major venue that serves up better views of the action.

I strolled by the house Saturday morning and, noticing that the gate was open, decided to ring the bell and see if anyone was home. Gregory greeted me warmly and invited me in for a coffee and a quick tour, proving once again that nothing tops Scottish hospitality.

The home was built in the 1920s and after several upgrades over the decades, it feels vintage, yet modern. Gregory and his wife, Catherine, live about 60 miles away in Edinburgh. They purchased the four-bedroom, four-bathroom abode about seven years ago as a summer escape.

“You can’t beat this can you?” Gregory said as we stood on a patio outside his living room, watching golfers stroll up to the 2nd green. Just beyond the links, waves crest along Firth of Clyde. On a clear day, like the one we had here on Thursday, you can see all the way to Isle of Arran.

Gregory is a member at Royal Troon — “You have to be, if you’re going to look at this every day” — and says that in the years he’s owned his home, the club has not approached him about purchasing it. (A quick web search reveals that it would easily fetch more than £1 million. Not that he’s selling.)

The building is split in half, and Gregory says his family gets along well with the neighbors, who occupy their side of the dwelling full time. His family has been anticipating this Open week for years, and, as you might expect, they have a full house this week.

“We’ve been very popular,” he says. “We have nine staying here. One is sleeping on a camping bed.”

Out back is the original old stone wall, maybe three feet high, that rings a small lawn. Gregory recently added a flat ledge along the top, almost like a countertop, an ideal spot to rest a drink. You can stand on top of the wall and peer over fans along the ropes for an unobstructed view of the 16th green. I asked Gregory if he did the renovation with the thought of standing on that wall this very weekend.

“Actually, I was thinking about it looking good for TV,” he said with a laugh. “I even had the roof power-washed a couple weeks ago.”

NBC has already paid a visit this week, and Paul is feeling good about his investment. Tour complete, I finished my coffee, snapped a family photo and returned to the bleachers.

The view didn’t seem quite the same.