Shane Lowry’s win hits home at the club where he learned the game, four hours from Portrush

BAILE MHIC GIOLLA MHUIRE, Offaly, Ireland — The boy, a foot or more shorter than his grandmother, had a soccer ball at his feet, kicking it against a table stand. Around him, engulfing him, was a mass of Irish humanity, emitting the distinct humidity wrought by the ancient marriage of warm bodies and semi-cold beer. The kids were dressed for soccer. The fathers were dressed for Orlando in March. The mothers (and grandmothers) were dressed for church. Mary O’Brien draped her right arm over her grandson’s slender chest and pointed the boy, Daire Garby, to one of the three TVs in the Esker Hills Golf Club clubhouse.

Just then, the club’s native son, Shane Lowry, was marching up the home fairway, four hours north by car. He was at Royal Portrush, three shots — an approach shot and two putts — away from winning the 148th Open. Esker Hills was the club that spawned him, this club in the middle of nowhere, 90 minutes from the bright lights of Dublin, a connect-the-dots map of wee villages to get there, if you’d want to get there at all. The clubhouse here is no royal anything. It’s a glorified ski hut, with exposed wood and low ceilings and six spigots, untended for long stretches, when the TV was too good to miss. There’s no village pub here, no shops, no rec hall. There’s the football pitch and the golf course and its clubhouse. Everybody’s welcome. 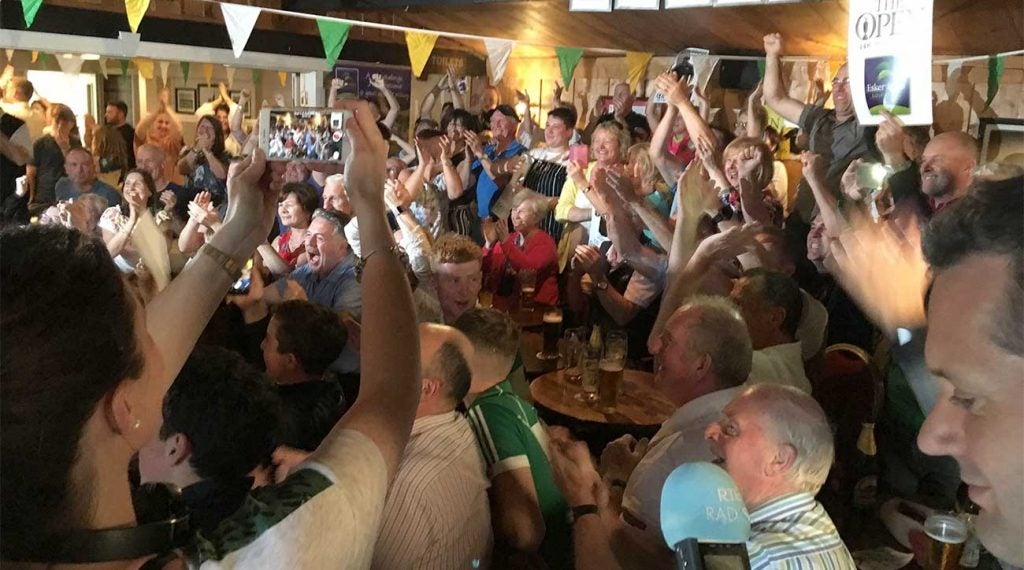 Lowry fans in the Esker Hills clubhouse cheer their man as he clinches his Open Championship victory.
Michael Bamberger

The pint glasses here are sponsored by Heineken (?) and Southwick’s (!). The table clothes are beige plastic and the napkins are a kind of pale red, in the same family as the winner’s beard. That the Champion Golfer of the Year hails from this tiny town here is astounding, and it speaks volumes about him and the people who raised him. It takes a village, to raise a golfer this good and this sane. Maybe you’ve heard his public comments, before, during and after. The clubhouse was silent, when Lowry gave his brief, sensible valedictory.

A Sky Sports camera settled on Shane’s father, Brendan, for a several seconds, and the clubhouse erupted briefly and settled-down abruptly. Everybody knows him here. Few might know what he did for a living, but they know he recently turned 60, that he was a county Gaelic football legend and that he ran and runs the junior golf programs at Esker Hills with a big heart and a sense of humor. Sinead Ni Ceallaighear, newly 14, was the club’s junior girls’ captain last year. She can drive it 210, shoot in the 90s and take charge as needed. Part of her job, she said, was to make sure her players “know the rules and look nice — trousers, skirts or skorts.” Sinead is fluent in two languages (English and Irish) but she took a couple quick and silent gathering breaths when asked if she had ever met Shane. 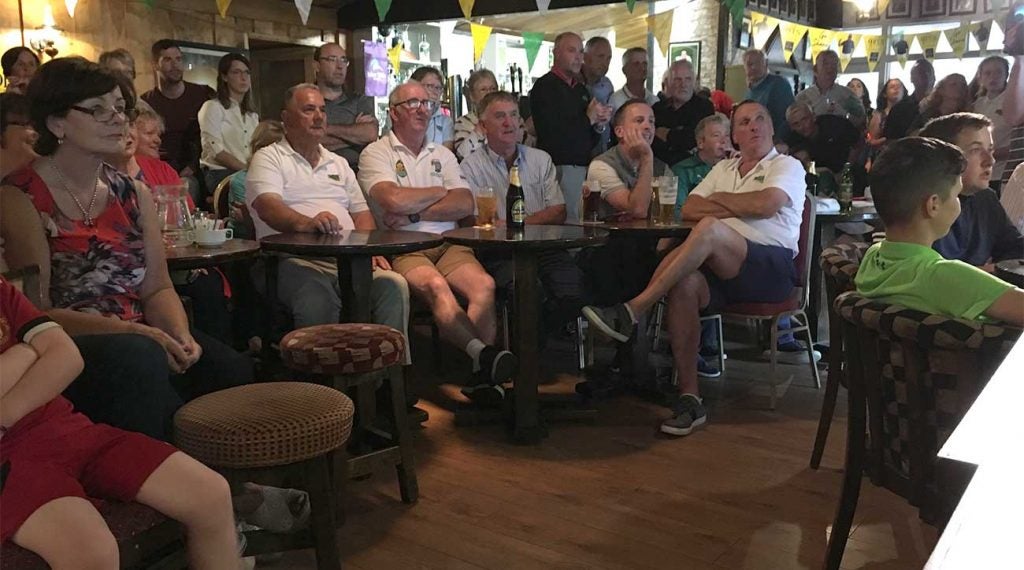 There were a few tense moments, but Lowry mostly cruised on the back nine.
Michael Bamberger

“Yes,” she said. There were pink rubber bands running through her plastic braces. “Twice.”

“Can you remember anything he said to you?”

What advice could be better than that?

The clubhouse revelers went silent and still whenever Lowry stood over a putt, as if they were greenside themselves. They did not cheer when some bit of misfortune fell to Brooks Koepka of the United States or Tommy Fleetwood of England or any of the other distant chasers. A chortle here and there, but no out-and-out cheering. The biggest eruptions came when, of course, Lowry holed his putt to win and when he referred to his support from home. He grew up in a bungalow a few miles from the course, attended the lone local school, biked to the course after the day’s final bell. He grew up in a time-warp. 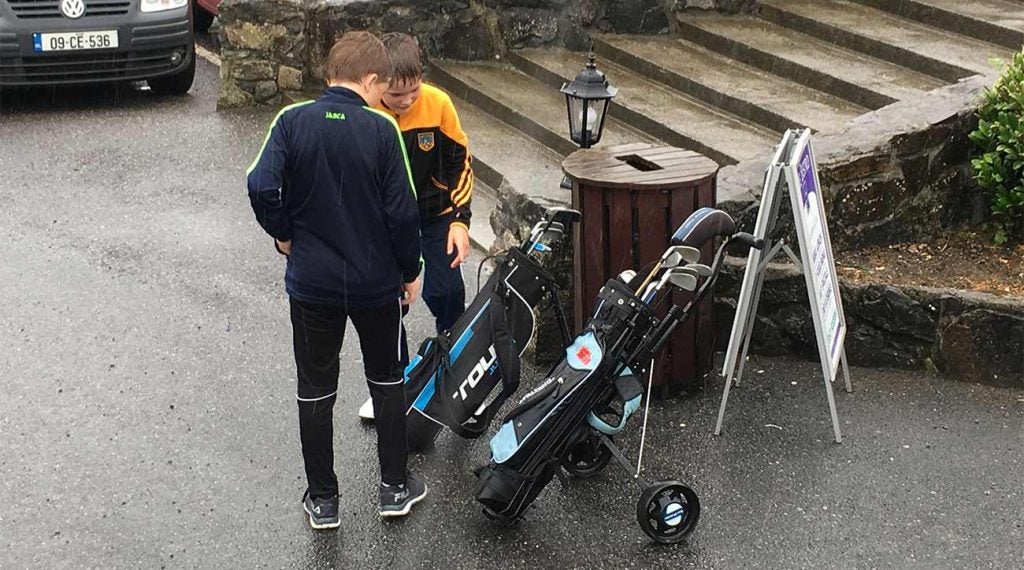 A couple of local kids battled the rain at Esker Hills as Lowry did the same four hours away.
Michael Bamberger

Nobody at Esker Hills seemed to know where precisely Shane and his wife and young daughter live today.

“Where does Shane live?” Joe Gaffey asked his brother-in-law, repeating the question just posed of him.

“Shane Buggy?” the brother-in-law asked. He was a hurler, in his day. Hurling is a high-status sport around here, as is soccer, Gaelic football and golf, though golf is a new arrival.

“Not Shane Buggy, Shane Lowry!” Left unsaid was you numbskull.

The brother-in-law offered a shrug.

The homeboy plying his trade four hours away made a birdie and the clubhouse broke into song, a folk song about an Offaly rover. That is, a man who plies his trade in distant places, but all the while his heart belongs to you-know-where.

A rover I have been and a rover I will stay/

but to that faithful county/

I will return some day—

Every last person in the clubhouse, save the out-of-town visitors, seemed to know every last word. Irish TV stations and some other reporters were on hand, but it didn’t feel for a minute like a “media event.” Still, one local man did joke to one of the club’s owner on his way in, “Can I come in even if I don’t have a camera?” Shane Lowry has a good sense of humor, too.

That owner was a man named Ray Molloy. He and two brothers and a neighbor built the club, in the mid-1990s, converting a sheep and “young cattle” farm into a golf course, under the guidance of an Irish golf figure known informally as Junior and as Christy O’Connor Jnr. on the many trophies he won. His uncle was the first Christy O’Connor and he was in the field when Royal Portrush hosted the Open for the first time, in 1951. The winner that year was an Englishman, Max Faulkner. The wait for an Irish winner of an Open played in Ireland was a long one. The Esker Hills Golf Club clubhouse was the perfect place to see an entire nation, north and south of a political border, exhale at once. A one-man band stepped in when Lowry walked off the telly for a final time Sunday night. People danced. Queen’s “We Are the Champions.” Van Morrison. Some other favorites. It wasn’t a party. It was a celebration.

Among the attendees was Esker Hills member Dominic Fleming (far right), who bears more than a passing resemblance to the late designer Alister MacKenzie.
Michael Bamberger

Junior designed a course that is nothing like Royal Portrush. It has three ponds and lush fairways and, on Sunday, kids chasing each other around the clubhouse, in the rain. It has a cigarette machine in the foyer and a leaking roof above it and a member named Dominic Fleming who is a dead ringer for Alister MacKenzie, the legendary course architect, though he had gone 61 years without anyone ever noting the similarity.

“Christy Junior walked the land and said, ‘Lads, I’ll make this place famous,’” Ray Molloy said. You know Ireland. The country is filled with plus-four talkers, Christy Jr. and Ray Molloy among them. “Christy made the course famous. Shane has made the place famous.”

Soon enough, the house went quiet. Shane Lowry was about to putt.