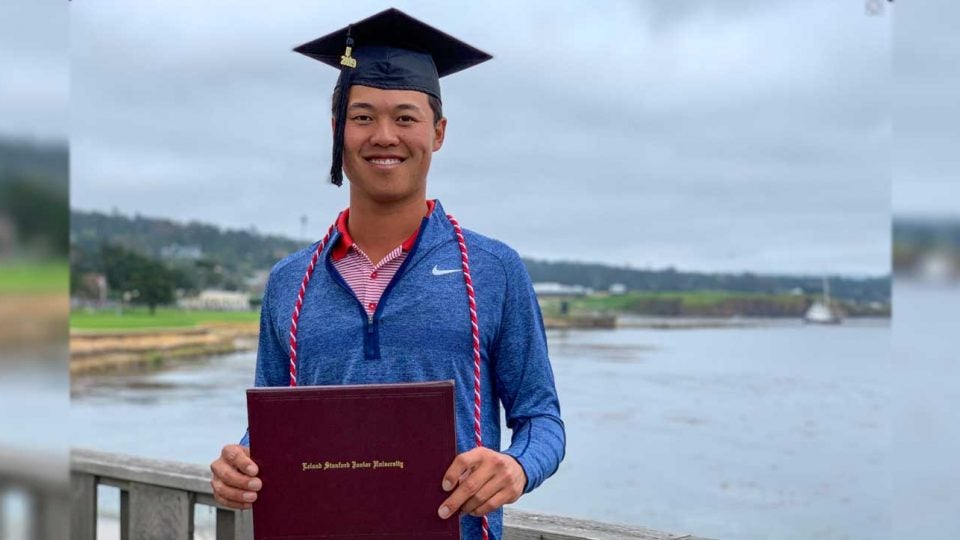 Brandon Wu had a U.S. Open to remember at Pebble Beach.
USGA

PEBBLE BEACH, Calif — It’s been a helluva week for Brandon Wu. The 22-year-old amateur completed his first U.S. Open here at Pebble Beach and also graduated from Stanford University on the same day. While Wu missed his commencement in Palo Alto, the USGA brought the ceremony to him.

Wu played alongside Dustin Johnson on Sunday. Wu finished off a three-over 74 and then strolled to the flash interview area to recap it with reporters. That’s where a USGA staffer met him with his honors.

Good to be Brandon Wu. pic.twitter.com/mwFokcONNF

Earlier in the week, Wu had discussed playing the 18th hole wearing his cap and gown, but it didn’t fully materialize until he had finished.

“There was obviously a little bit of talk about it happening, but honestly I wasn’t expecting it,” Wu said afterward. “I wasn’t thinking about it. The crowd was yelling at me all day about graduation, so it was pretty cool to get this kind of ceremony at the end here.”

Wu’s final few weeks at Stanford were as memorable as it gets. He and his Cardinal teammates polished off a phenomenal season with the NCAA title in May before Wu focused his sights on Pebble Beach. Then, after making the cut, Wu was the low amateur through 54 holes. While he eventually lost that designation over the final 18, he still got his academic honors and left a happy camper.

“I mean, I definitely think I’ll regret it maybe a little bit, but…both were good things, so I couldn’t go wrong. I’m happy I played today.”

The main factor that separated Tiger Woods from the field, according to Ernie Els
Go to mobile version