$300,000 on a putt? These are the 5 best Michael Jordan golf gambling stories 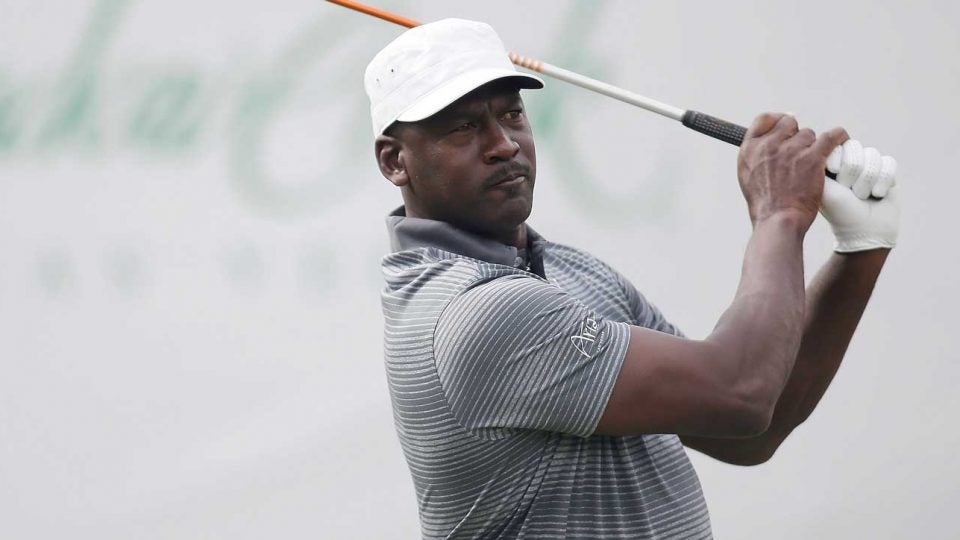 Michael Jordan is an avid golfer and enjoys playing for some money when he tees it up.
Getty Images

Michael Jordan is known for many things. He’s an incredible basketball player, brand owner, shoe developer. Jordan is even well-known as an amateur golfer. Most infamously, however, he’s known as an avid gambler. An avid golf gambler.

Jordan’s drive to compete on the golf course has extended into his wallet many times, and thankfully for us, the stories that result are rather entertaining. Here are our favorite five stories, told by some pretty legendary figures.

Charles Barkley and Jordan have a rich history of competing together, and apparently they used to play a lot of golf together as well. Well, that was before Barkley’s game left him. But when they did, apparently Jordan was always playing for much more money than Barkley. As much as hundreds of thousands of dollars. We’ll let Chuck recall everything, during one of his appearances on the Dan Patrick Show below.

"Whatever makes you scared."

As a resident of Jupiter, Fla., where Jordan spends much of his time, Rickie Fowler has played with him many times. According to his breakdown of rounds with Jordan, which he told to Jason Sobel of the Action Network, Jordan needs money on the game to really show off his competitive side. While Fowler didn’t dive into the specifics, it sounds like one match in particular stood out, where the pro golfer won the match (perhaps most importantly, he didn’t lose) on the 18th hole, in which Jordan was getting a stroke.

Apparently, for Fowler, that’s pretty great practice because there’s a lot of money involved. “Those are some of the best preps for going out and being ready to play tournament golf,” Fowler told Sobel. “He’ll play you for whatever you want. Whatever makes you scared.”

Jordan has often frequented the Kentucky Derby, perhaps the greatest gambling location outside of Nevada in the United States. While visiting Louisville for the Derby, Jordan would play rounds at Harmony Landing, where Justin Thomas’ father is the head pro. According to how Thomas has put it many times, the major-winner was just 13 years old when he began caddying for Jordan and his friends. After a couple years as his caddie Jordan became keen to JT’s prowess as a player and, in a surprise move, Jordan chose Thomas to be on his team. According to the tale, Thomas and Jordan birdied four of the final seven holes to win big, and Jordan tipped his caddie well. Really well. Check out Thomas’ retelling of the story below.

Perhaps Jordan’s most public shaming for any golf gambling came in 1993 when frequent playing partner Richard Esquinas published the book titled Michael & Me: Our Gambling Addiction . . . My Cry For Help! In the book, Esquinas alleged that Jordan ran up more than $1.2 million in golf gambling debts, a number Jordan later disputed, and a sum that was apparently never paid in full. Esquinas said that Jordan and him eventually agreed upon settling the debt to $300,000, to which Esquinas received partial payment. You can read all about how that testy situation was covered here, as well as a look back by Vice from 2017.

While this might qualify more as a basketball story, it has golf and gambling written all over it. At the peak of his hooping powers, Jordan was taking in a morning round with NHL legend Jeremy Roenick, who also happens to be an avid golfer. According to Roenick, back in the spring of 1992, he beat Jordan for a couple thousand dollars on their first 18 holes of the day, and the basketball star doubled down. Jordan asked Roenick to play another 18 holes, and this time they did it by crushing beers.

“We roll around another 18 and I take him for another couple [thousand dollars],” Roenick said. “Now we’ve been drinking all afternoon and he’s going from Sunset Ridge to the stadium, to play a game. I’m messing around. I’m like, ‘I’m gonna call my bookie. All the money you just lost to me, I’m putting on Cleveland.’

MJ once dropped 52 points on the Cavs after playing 36 holes and housing beers all day with @Jeremy_Roenick. ?pic.twitter.com/h4mHaYR2lF