#AskAlan: At what event will Sergio Garcia get the most brutal reception this year?

Every week, GOLF senior writer Alan Shipnuck fields questions from the masses about hot topics in the golf world. This week, Shipnuck investigates Phil Mickelson’s resurgence, Tiger Woods’s prospects for 2019, at which tournament Sergio Garcia will get the most brutal reception, and much more.

Man, from all the citizen-journalist video I’ve seen on Twitter, Tiger has been swinging so well in the practice rounds at Riv. But Phil already has a first and a second, which is a substantial head start. Of course, the majors will define 2019 for both of these aging warriors. Woods made two strong runs last year, while Phil never factored. It’s pretty much a toss-up, but I’m thinking Tiger will be a more consistent contender when it really matters.

#AskAlan Is Zach Johnson a surprise Presidents Cup assistant captain pick? I would never have guessed Tiger and Zach were tight. -@rjlafleur

Not a surprise in this post-Task Force era, when continuity is the key buzzword for the American leadership. Zach is clearly being groomed to be a future captain, so he will be a fixture in the team room at every Cup until he gets his turn. And Tiger has always respected Johnson as a guy who maximized the talent he was given. When you beat Woods head-to-head in his prime at Augusta – as Zach did in 2007 – that lingers.

If you had to pick one: Casey or Fowler to close out a 54-hole lead? -@WLSpence

I’ll take the field, thanks.

What is going to be the most brutal welcome that Sergio Garcia gets this year on the PGA Tour? Can’t wait for him to tee it up at Bethpage. -@KellerGreg

That was always going to be an interesting week, given his tortured history with Noo Yawkers. The fans at the Players can be brutal, and that’s coming fast, while the greens in Saudi Arabia are still healing. If Sergio can weather that week, he should be fine for the rest of the year. But if he starts barking back, it’s going to be a long, challenging season for him. 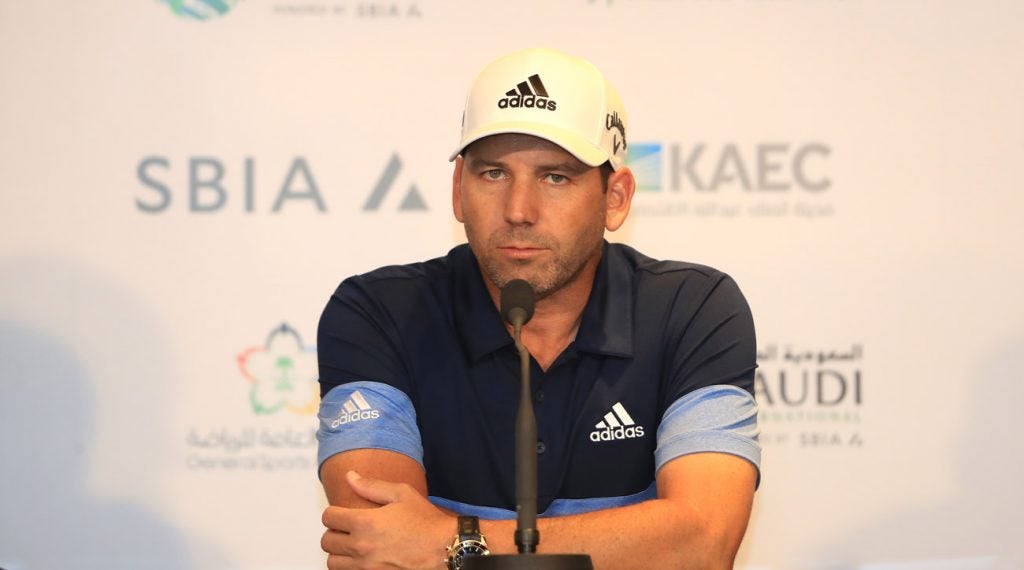 Sergio Garcia during a press conference at the 2019 Saudi International.
Getty Images

Following his recent temper tantrum do you think Sergio will be treated any differently by the PGA players in the locker room this week in LA? What do you think would have been an appropriate punishment? Is a 3-6 month worldwide ban over the top? #AskAlan -Brian (@bcunningham0)

The players long ago decided whether or not they like Sergio, so I don’t think this latest episode will change too many hearts and minds, just as his recent apology on Instagram won’t sway too much public sentiment. He is who he is. The problem with a suspension is that there is not one global authority to enforce it. Keith Pelley’s reaction was so neutered because if he suspended Sergio for three or six months – which would definitely have been appropriate – one of his most important stars would just set up shop on the PGA Tour. Meanwhile, Jay Monahan has no interest in sanctioning a player who misbehaved on a rival tour half a world away. So, Sergio skates.

Alan, what does Phil do when he turns 50 – continue tilting at windmills on the PGA Tour going after 50 wins, head to the PGA Champions, or try to split between both? -Kit (@Dunk2604)

I’ve asked Phil about this and he has zero interest in the Senior tour. He’s been beating those guys his whole life, so what’s the fun in doing it again? He’s an adrenaline junkie and loves the crowds and competition on the PGA Tour. Maybe when he gets to his mid-50s and starts losing speed he’ll reconsider but 16 months from now, when Phil turns 50, I wouldn’t expect any changes to his schedule.

Is Phil your pick for the U.S. Open off this victory? -@Thomas_Laffont

There is sooo much golf to be played between now and then, I don’t think we can anoint him as the prohibitive favorite just yet, but certainly Mickelson will be on the short list come June. But a firm, fiery Pebble will be a completely different course then. Mickelson prevailed at the Clambake in part because of his hyper-aggressive play during the final round. That 3-wood he smashed off the 4th tee to set up a crucial birdie becomes a too high-risk shot when the fairways are firm and fast. His hooked drive on 10 would’ve bounded onto the beach rather than safely plug on the edge of the fairway.

The flipside is that Pebble will play so short in June the key will not be tee shots but rather the approaches into those tiny greens, and Phil’s iron game remains preeminent. It’s certainly going to be fascinating to see how he navigates his way around a course that offers the best, and perhaps final, chance for him to break his Open curse.

Phil Mickelson won the 2019 AT&T Pebble Beach Pro-Am, but can he win the U.S. Open at Pebble in June?
Getty Images

Of course he is! In less than a calendar year he has won two marquee events. You think there are a dozen Americans who are better than him? Also, you just know that Cap. Woods is dying to boss him around.

What does it take to get into the Pebble Beach Pro-Am?
-Detlef (@Dschrempf)

Relationships. Yes, you also need to be able cough up the $25K entry fee, but there are plenty of rich dudes out there. The guys who get invited are pals with the Tour pros, or friends of the Pebble Beach golf community, or members in good standing at the private clubs where the ruling class gather. If you were, say, a retired NBA star with a lot of money in the bank and a love of golf, you should kick down the $10K or so it takes to play in the Senior event at Pebble Beach every September, where spots are always available. That’s a feeder system for the Pro-Am, a chance to get to know the local kingmakers and have your game and temperament vetted. (It’s also a really fun week!)

In the mid-90s, my dad and I sneaked onto 16 at Cypress Point at sundown. On our walk to the tee, we passed a boozy foursome who appeared to have just done the same thing. Was this not uncommon? -@homer_nods

Well, I can’t really say, since during my misspent youth I only sneaked onto 16 when it was late at night under a full moon and the course was empty.

I can think of at least 25 U.S. tracks ranked lower than Pebble where I would rather see a PGA Tour event played. Put Pebble’s layout in Iowa, thus removing the ocean, and you have, at best, a Web.com venue. Agree? #AskAlan -@RyderHouck

One on hand, this is utterly nonsensical – how could you have the 8th hole in land-locked Iowa? But I understand the point you’re trying to make. There are a ton of dogleg-left cape holes that evoke Pebble’s 18, but if you’re playing around a marsh, or a man-made lake, it just ain’t the same. During tournament week I did have discussion with a course wonk in which we agreed there should be a separate ranking for seaside courses because the ocean adds so much to the experience, aesthetically and for heroic shot values. But the fact is the Pacific is an inextricable part of the Pebble Beach experience. Until the course is swallowed up by the rising seas we sure as heck ain’t playing the Clambake in Iowa.

One time at Turnberry it was so windy it was literally hard to walk. I’m not great at estimating mph but it had to have been blowing at least 60. I remember hitting a 7-iron that went almost 300 yards! But that only lasted for about 5 holes. By far the worst weather I’ve played in domestically came last Friday, when I took the No Laying Up homeys out to MPCC. It was freezing cold and spitting rain. I wore a compression shirt, a polo, a wool sweater, a cashmere sweater, a Gore-Tex rain jacket, long Johns, cordoruy pants, rain pants, a wool beanie, a water-proof bucket hat and gloves on each hand. And we had an f’ing blast.

What do you think of starting the season in Florida and then going back to the West Coast to get better weather? -@MikeWalter9999

It makes so much sense it will never happen.

Why doesn’t pgatour.com show the money won by the players at the conclusion of the tournaments? Each week it’s a chore to find a website that does.
-@RoadWarrior_

It’s not because the suits in Ponte Vedra Beach are suddenly sheepish about the bloated paydays. The Tour has worked hard to make FedEx Cup points the only unit of measurement that matters. Exemptions, Tour cards, etc. are now measured in points, not money, so they don’t want any of us to even think of the almighty dollar.

What kind of beer did you drink in the PJ? -Kevin (@kdodds51)

The only options were Heineken and Amstel Light. I opted for the latter. It tasted like middle-class tears. 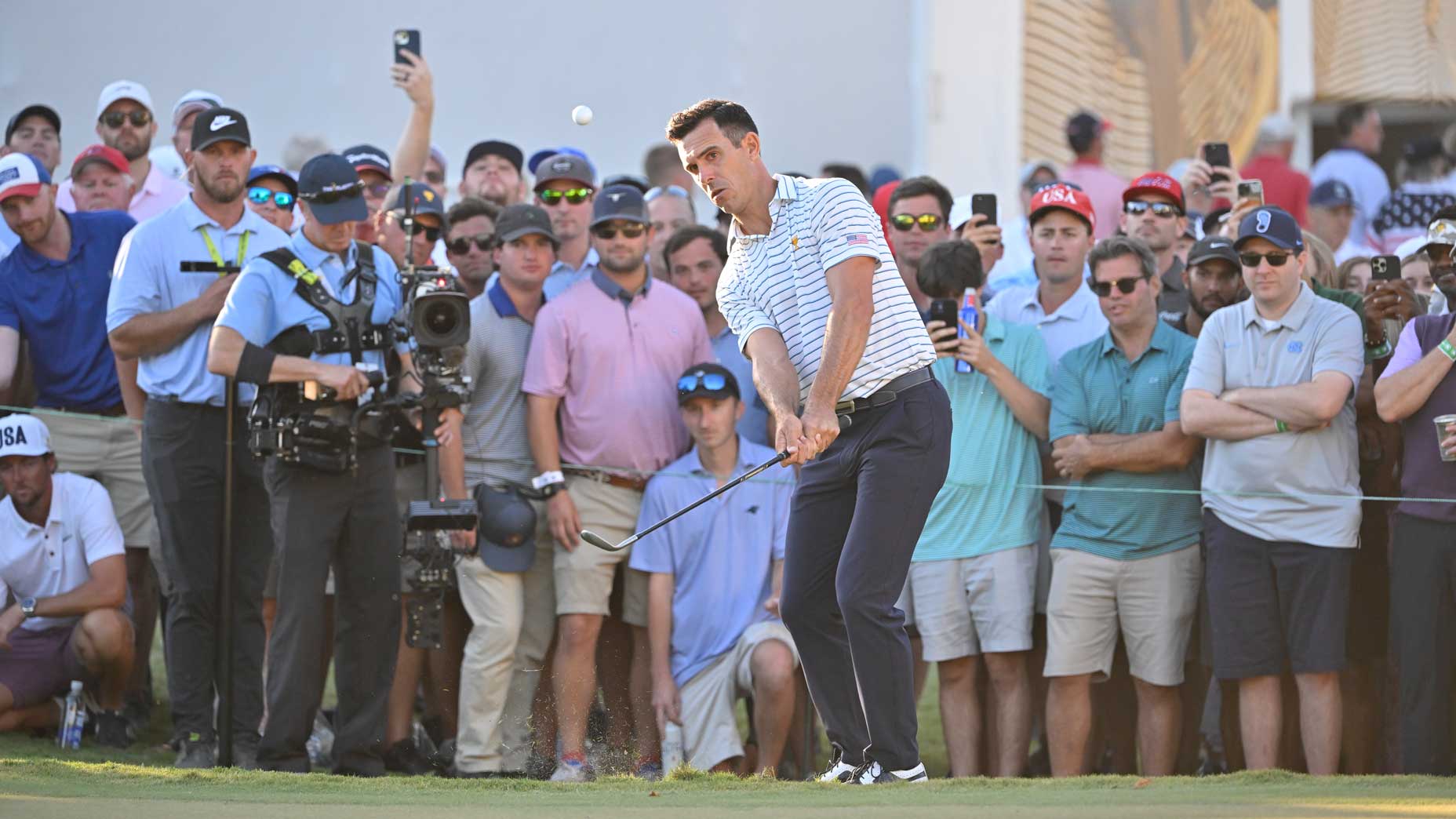 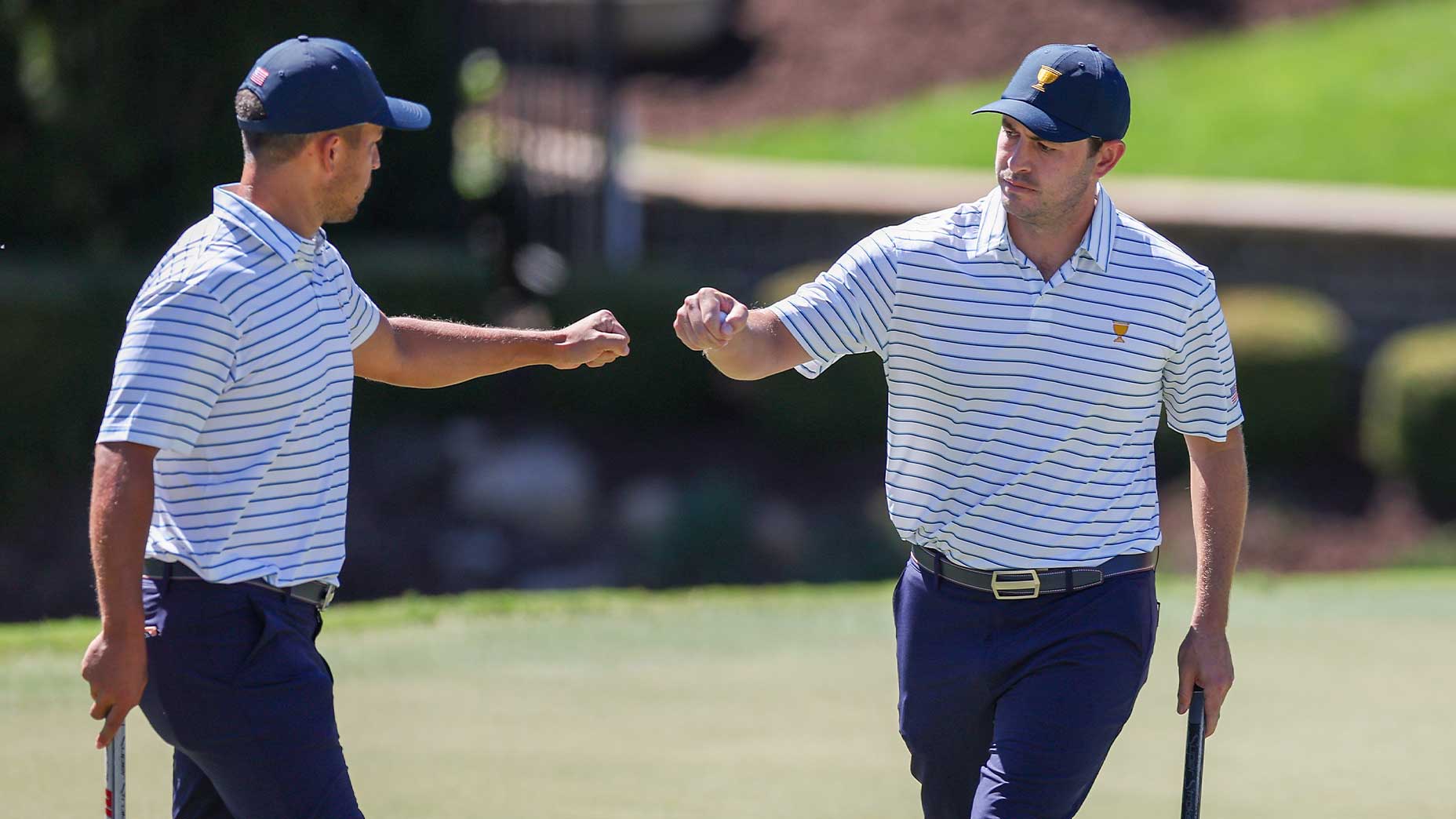 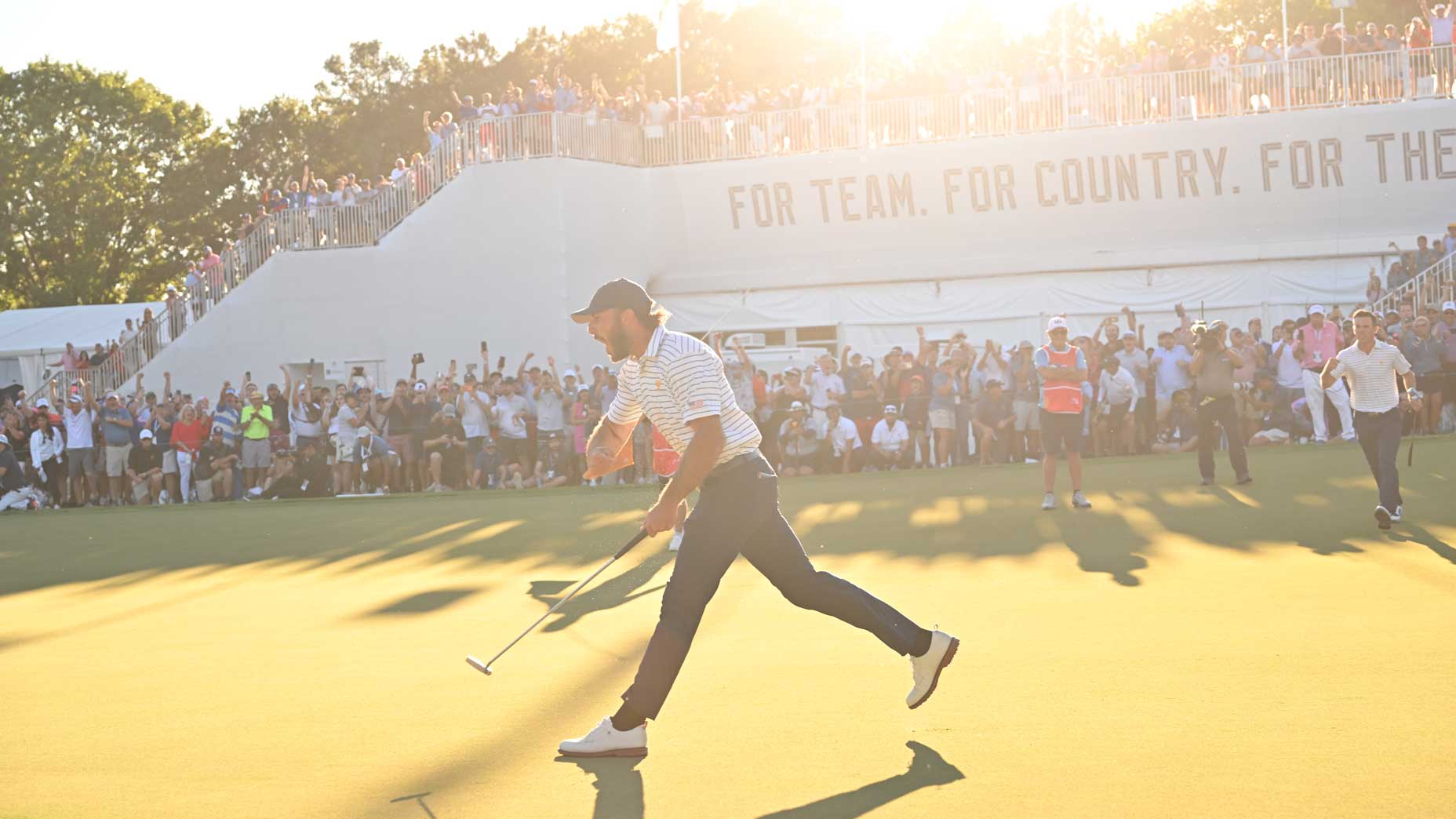 Even in a blowout, the Presidents Cup found its ‘surreal’ signature moment
Go to mobile version