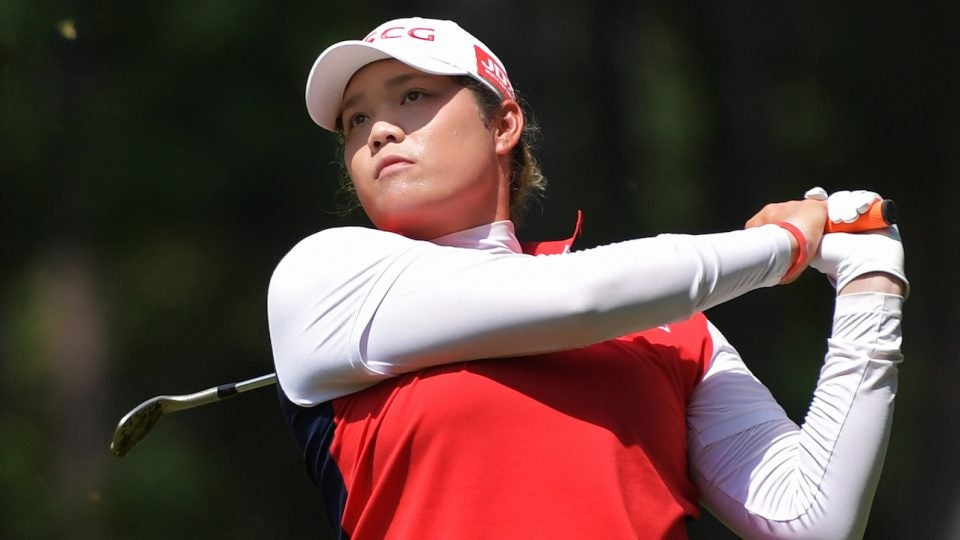 SHOAL CREEK, AL - JUNE 02: Ariya Jutanugarn of Thailand plays a shot on the first hole during the third round of the 2018 U.S. Women's Open at Shoal Creek on June 2, 2018 in Shoal Creek, Alabama. (Photo by Drew Hallowell/Getty Images)

BIRMINGHAM, Ala. — Ariya Jutanugarn turned a three-shot deficit into a four-shot lead after shooting 5-under 67 Saturday at the U.S. Women’s Open at Shoal Creek.

The 22-year-old from Thailand started the third round behind Australia’s Sarah Jane Smith, but quickly gained ground, making two birdies on her first three holes.

Jutanugarn took the lead after Smith stumbled with back-to-back bogeys and then surged ahead with three straight birdies on the back nine. She was at 12-under 204 for the tournament.

Smith started the tournament with back-to-back 67s, but shot a 74 in the third round and didn’t make a birdie to fall into second place.

South Korea’s Hyo-Joo Kim was in third after shooting 68 and was six shots back.

It was a long, sweaty day at Shoal Creek, especially for those who had to complete their second round on Saturday morning before playing the third. Jutanugarn said she had a 4 a.m. wakeup call and played a total of 28 holes as the temperature hovered around 90 degrees and combined with stifling humidity.

Jutanugarn didn’t seem to mind, finishing with a 70 in the morning. She was able to rest a few hours before getting back on the course and birdied two of the first three holes to immediately put pressure on Smith, who has never won on the LPGA Tour.

Smith had the advantage of finishing her second round on Friday before thunderstorms swept through central Alabama, but couldn’t capitalize. She made seven straight pars before back-to-back bogeys on Nos. 8 and 9 dropped her one shot behind Jutanugarn.

Jutanugarn is trying for her ninth LPGA Tour win and her second major. She won the Women’s British Open in 2016 and is coming off a victory at the Kingsmill Championship in May.

Michelle Wie started the third round in a tie for fourth, seven shots off the lead, but shot a 76 to fall out of contention.

The Shoal Creek course has taken a lot of rain over the past few weeks — including nearly an inch on Friday that forced the second-round delay — but still remained in relatively good shape. A day of sunshine certainly helped conditions, but more rain is possible on Sunday.