Sure, major season is over. But before you shift your focus fully to fantasy football mock drafts or the Red Sox Wild Card chances (dwindling but still alive, thanks for asking) there’s still some serious golf to be played. Here are seven bits of intrigue to hold your interest as the game’s best head to Liberty National for the start of the FedEx Cup Playoffs.

Forget the talk of overlooking or underrating Brooks Koepka; he’s near-universally acknowledged as the current heavyweight title holder. He reinforced that perception by flattening Rory McIlroy in the final pairing at WGC-Memphis and locking up his second consecutive Player of the Year title in the process. But now Koepka has the chance to add an exclamation point to a season where he’s already gone a bananas T2-1-2-T4 in the majors. Winning the FedEx Cup would continue to elevate his perception, build his (hardly-empty) bank account and widen the gap between his game and that of the rest of the world.

We saw a funky Tiger Woods in the first round of the Open Championship — and it led to a missed cut. It’s been interesting to see the perception of Woods quickly shift accordingly since then; in Vegas he’s shifted from a tournament favorite to that third tier of players in the 30/1 range. But this is arguably an overcorrection, putting too much stock in an Open he played cold, wet and out of sorts.

By contrast, Liberty National will feature warm weather and a more familiar course and travel schedule for Woods. Since the 2018 U.S. Open, Woods has played 19 tournaments and has 17 top-40s, nine top-10s and the two wins. It seems more likely his result this week will be in that vein rather than the MCs we saw at Bethpage or Portrush — but we’ll be eager to watch and find out.

Yes, there’s that looming Woods-as-playing-captain drama looming, but that’s just the tip of the iceberg when it comes to U.S. Presidents Cup intrigue. Take a peek at the list of players who would need a captain’s pick to qualify: Rickie Fowler (11), Tiger Woods (12), Phil Mickelson (14), Patrick Reed (17), Bubba Watson (19), Jordan Spieth (29) and then — bear with me — Collin Morikawa (57) and Matthew Wolff (81).

If the perennial faces of American team golf don’t rally throughout the playoffs, Woods will be forced to make some tricky cuts. The intrigue here is partly the Presidents Cup itself but largely the opportunity to establish a tangible ranking of current American players. Ranking stuff is fun! This will be no exception.

Same principle applies — but with a far less cemented cast of characters. If captain Ernie Els made his picks today and went chalk, he’d have a squad featuring C.T. Pan, Jazz Janewattananond, Abraham Ancer and Justin Harding; hardly known giant-killers. We fully expect Sungjae Im (12) to secure his spot on the team, and we’ll have our eyes trained to Si Woo Kim (15) Ben An (16) Branden Grace (23) and Joaquin Niemann (31) as some high-ceiling potential picks who need to improve their cases over the coming weeks.

You don’t have to like it. But admit that you’re curious how it will all feel when it starts. Remember, this year’s Tour Championship has a bizarre, untested new format where the No. 1 player in the FedEx standings will start the week at 10 under par, with the rest of the field beginning several strokes behind. If Koepka takes his head start and just burns the chase pack, this will all feel sort of dumb and anticlimactic. But, Woods’ win last year excepted, the Tour Championship/FedEx Cup split already made the season finale feel sort of dumb and anticlimactic, so this at least gives us a clean resolution by week’s end — and a shootout with crazy money on the line. 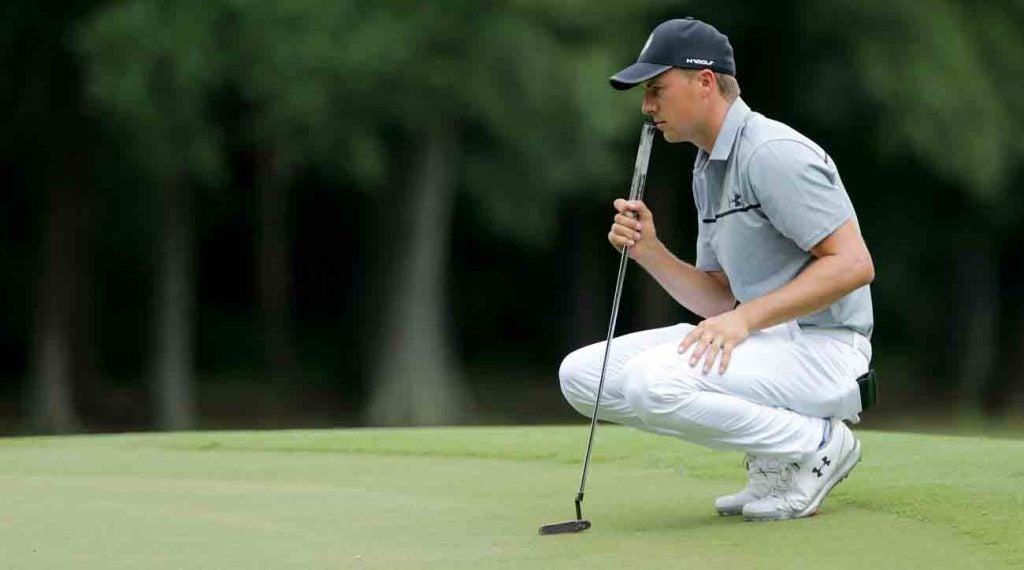 Jordan Spieth struggled to a third-round 77 at the Wyndham Championship.
Getty Images

WHAT’S UP WITH JORDAN SPIETH?

The Golden Boy who was remains among the most fascinating characters on Tour, but for a different reason now. Spieth currently has an unmatched ability to go from world-beater to hopelessly lost one day to the next — like last week, when he plummeted 66 spots on the Saturday leaderboard to go from contention to missing the secondary cut. Spieth’s elite putting can duct-tape together sketchy ball-striking from time to time, and he’s got plenty to play for — two good tournaments could earn him a spot in the Tour Championship and re-entry into Presidents Cup pick talk. On the other hand, his scoring average has skyrocketed on weekends all season, which is now a big enough sample size to red-flag Spieth’s reliability.

Much of the time we’ve spent with Matt Wolff and Collin Morikawa has come in mid-sized PGA Tour events. But their star has risen and now their stage will, too — and they seem wholly unbothered by the bright lights. The only bummer is that they won’t be joined by boy band member Viktor Hovland, who’s sure to end up on the PGA Tour extremely soon but just missed out on Liberty National this go ‘round.

In all, from the playoffs’ eldest contenders (Woods, Mickelson et al) to its youngest (Wolff, Morikawa and 21-year-old Sungjae Im among them) there’s more than enough intrigue to flip on Liberty National to take in the action this weekend.