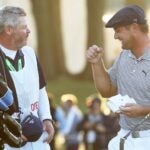 Bryson DeChambeau's U.S. Open win meant so much more than just the pronouncement of a first-time major-winner.

For 14 years we have kicked around the previous U.S. Open at Winged Foot, and this one may linger even longer. Bryson DeChambeau does not have Phil Mickelson’s cult of personality – not yet – but his triumph has the whiff of the epochal.  Here are five takeaways from an unforgettable national championship.

Bryson is more substance than style.

It has been so easy to get distracted by all the noise around DeChambeau, whether it’s his bookworm pronouncements, funny clubs, social media beefs with Brooks, new diet or other fluffery. But there can now be no denying that his resume’ is world-class: U.S. Amateur, NCAA Championship, 7 Tour wins by age 27 and a U.S. Open blowout on a historic course. For all the talk of DeChambeau’s distance off the tee, his Sunday playing partner Matt Wolff outdrove him a couple of times. Tony Finau and Cam Champ might be longer than Bryson, and Dustin Johnson and Brooks Koepka are only a notch below.

What separates DeChambeau is a commitment that borders on zealotry. While Finau gives up lots of yards with a sawed-off swing and DJ employed a conservative gameplan that saw him hitting numerous irons off the tee, DeChambeau attacked relentlessly by swinging with abandon. He has more than confidence – it is conviction. And the pursuit to exploit his advantages never ends; following his win, Bryson mused about trying to master a 48” driver to pick up even more precious yardage. That is precisely what makes this victory so exciting. Rather than grow complacent, a validated DeChambeau is sure to press on in his quest to reinvent the game, taking all of us along for the ride.

The U.S. Open as we used to know it is dead.

This has been a long time coming, but Winged Foot feels like a tipping point. It was glaringly obvious that the traditional setup of long rough and narrow fairways is no longer enough to slow down the new age bomb-and-gougers. They will still blast away with impunity, overpowering the par-5s and leaving only short-irons or wedges into the par-4s, which, even from the rough, DeChambeau time and time again played with enough finesse to leave good scoring chances.

Narrow setups put every player in the long grass more often, giving the bruisers that much more of an advantage. Even Winged Foot’s vertiginous greens could offer only so much resistance. Alas, the way forward is unclear. There is not a course on the planet long enough to challenge Tour players; 9,000 yards would be the minimum needed, and that requires an obscene amount of land and water. The USGA has shown no appetite for rolling back modern distance gains, leaving the ancient playing fields unable to contain this new generation of sluggers. Perhaps shorter, not longer, grass is the answer – wickedly fast green surrounds that require more precision and touch than long, hack-out rough, and fairways that Stimp at 12 that let errant drives roll forever into deeper trouble. The USGA has nine months to figure it out before the next U.S. Open but that won’t be easy.

Musing on DeChambeau’s nuking of Winged Foot, Rory McIlroy said on Sunday, “It’s kind of hard to really wrap my head around it.”

A tie for 4th at last month’s PGA Championship was a heckuva major championship debut for Wolff, but he validated that showing with an even better one at Winged Foot. Wolff fought hard on Sunday but was simply outplayed by DeChambeaus’s epic performance. But the kid has as much moxie as clubhead speed and it will be a blast to watch him go shot-for-shot with Bryson in the coming years.

Rory remains as baffling as ever.

In the end, nobody was going to catch DeChambeau, but McIlroy didn’t know that when he 4-putted the first green. Just like that, any dreams of a comeback were dashed. Such Sunday letdowns have become so routine that on Twitter my colleague Sean Zak offered a succinct analysis: “Rory gonna Rory.”

Harris English is the comeback player of the day, week and year.

On Sunday, the poor guy lived a nightmare on the first hole, his errant drive never being found in the rough and forcing English to make the walk of shame back to the tee. He took a brutal double bogey. But English somehow rallied to play the next 11 holes in 2-under, a parable for us all. His 4th place finish was just the latest comeback for a player who had fallen into the abyss, finishing 149th in the FedEx Cup in 2019.

“I enjoyed that,” English said of his first time contending at a major championship. “I enjoyed the firmness, the fastness, the crazy pins. I thought it was awesome.”

Speaking for the whole of the golf world about this U.S. Open, English added, “Going to learn a lot from it and be ready at Torrey Pines next year.”