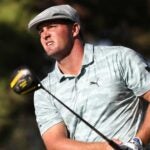 To stay in the hunt at Augusta National Golf Club, you want to get to “the spots.” Right of the bunker on hole No. 5. Into the speed slot on 10. Beyond the fairway bunkers on 18. These are scoring zones, and everyone knows them.

But just a handful of players in Masters history know the other spots — the areas on the course that only the game’s longest hitters have reached. Jack Nicklaus and Tiger Woods know them and rode them to a combined 11 green jackets. Bubba Watson, too, who powered his way to wins in 2012 and 2014. This year’s biggest bomber — the hulk who dismantled Winged Foot in September — is keen to follow suit.

“When you look at Tiger in 1997,” says the newly minted U.S. Open champ, “he could get to places nobody else could. That’s what I’m trying to do, to give myself more options.”

In other words, find these spots and you uncover a different Augusta National. Tiger won by 12 in ’97, when he averaged 323 off the tee — 25 yards longer than everyone in the field. Jack won by nine in 1965, when he was 25 and known to rip it 300 yards. The tees at ANGC have been pushed back over the decades, but for select power players of each generation, the course has been — dare we say it — gettable. Here are the holes where Bryson can find his edge.

Augusta’s 2nd hole might be the best table-setter in golf. Play it well and you’re off and running at the Masters. But it can bite you if you’re not careful off the tee. The drive is one that Nicklaus says used to give him fits.

If he yanked it left, he’d be in the trees — the “Delta ticket booth,” as he called it. End up there and you start thinking about your flight home.

A good drive on 2 brings birdie into play, but a great drive makes eagle possible. This year, a 320-yard draw off the center of the fairway will catch a speed slot that runs down toward the green. Tiger found this sweet spot in 1997 and again in 2005, when he played a smooth 8-iron in for an effortless, two-putt birdie. That’s how you settle into a tense final round, even in ’97, when he held an 11-shot lead.

Virtually every approach shot into this hole is downhill, so the shorter the iron the better. And few greens are more receptive. Even though the hole has been lengthened by about 20 yards since the ’90s, Bryson is going to hope to do exactly what Tiger did in ’05: smash driver and smooth a land-and-stop 8-iron pin-high. Table set.

The approach into the 10th is downhill for everyone, so the question becomes How can you make it play less downhill? Bomb away. That’s how Bubba has played it for about a decade, en route to his two jackets.

The game-changing spot on 10 is about 30 yards — or less, if you’ve got the nerve — short of the centerline fairway bunker. The play is to get it out there about 330 to 350 yards. That’s where the hill flattens out and becomes almost level with the green — just a bit farther from where Nick Faldo played his approach in 1996, during his epic final-round comeback. The bulk of the field will have to make adjustments for a severely downhill lie and the spin needed to let the ball release, but bombers will be looking at a pretty standard short iron.

In 1997, Tiger again played an 8-iron into this green, but only because he throttled down to a 2-iron off the tee. Recently, when he was asked what club he’s hoping to pull for his approach, DeChambeau said, “A wedge, ideally,” which probably had some old-timers chuckling. But for a guy whose average drive this season was 322 yards, it’s more than feasible. Hitting wedge into this hole four days in a row would almost certainly guarantee Bryson at least one stroke on the field — and that’s what bombing is all about.

When asked this summer about the upcoming Masters, DeChambeau said simply, “I’m just going to unleash.” Arguably, no hole will allow the big dog to eat quite as ravenously as the 13th. Where many players will have to bend a perfect draw around the corner to find the A position, Bryson aims to just go up and over all of it. He isn’t thinking about those trees on the left or the creek that snakes along beneath them. He’s focused on the end of the tree line on the right, where a trio of lonely, leafy towers hangs out between the 13th and 14th fairways. The landing zone there is enormous, and even though the fairway slopes to the left and the green slopes to the right, having just 170 yards into the hole is the stuff green-jacket dreams are made of.

On Sunday in 2014, Watson pounded his drive 366 yards, out around the bend. Peter Kostis saw where the ball landed and was reduced to laughter. Ben Crenshaw asked GOLF’s Alan Shipnuck at the time, “What game is he playing? It isn’t golf.”

It’s exactly the game DeChambeau hopes to harness on 13: one long drive, one smooth wedge, one eagle putt.

Nicklaus calls the second shot on 15 one of the most important in any Masters. Many a great player has come undone staring down the hill at water short and water long and an isthmus green in between. The job of the bomber is to make it a little easier on themselves than it is for everyone else. Nicklaus did that in 1975 with a drive just long enough that he could play an iron into the green. Okay, it was a 1-iron from 240 yards, but you get the point.

Throughout the ’90s, Davis Love III, Greg Norman and Tiger Woods drove it superlong on this hole. Woods hit it so far in 1997 that even when he missed way to the right with his approach, he still had a pitching wedge in hand and could hoist his ball up over the trees to the right side of the green. It was a ho-hum par from there.

While drivers of the past had to worry about the trees that bottleneck the fairway off the left, DeChambeau will likely be unfazed. If we’ve learned anything from guys like Bubba and Phil Mickelson, playing from the pine straw at Augusta National isn’t always as forbidding as it seems. And if Bryson does catch the fairway, a 350-yard tee ball will leave just 180 yards, downhill, to the hole.

That’s driver, 9-iron and a look at eagle. No problem.

In years past, with a green jacket on the line, we’ve seen champions very cautiously coax their ball into the fairway on 18. One hole to play, peering down the chute — it’s as nervy as tee shots get. Mickelson even laid up with 3-wood in 2004, trying to guarantee a play from the short grass.

DeChambeau won’t be throttling down. He intends to take dead aim at the fairway bunkers and try to hit a fade. If he succeeds, great; if not, he’ll just fly the bunkers and head for Patronville, the area between the 8th tee and 9th green. That’s exactly what Woods did on Sunday in ’97. It looked weird, especially when Woods barked at a photographer after he tugged his drive. But seconds later his ball cleared the traps, bounded down the hill and just … kept … rolling. It was a great miss. With no second cut beyond those bunkers, the 18th fairway triples in size. This year, without galleries trampling the turf, why not wail away if you’re Bryson? The angle isn’t always ideal, but with a wedge in hand this journey to the green — and maybe to a championship — isn’t nearly as no-go as it used to be.