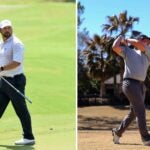 Brett White is the Korn Ferry Tour's newest (and most inspiring) member.

The path to success is rarely linear, but my goodness, it’s never as winding as the one Brett White has ventured on over the last half-decade.

On Friday, just four years after a prolonged hospital stay left him re-learning to walk, White earned his Korn Ferry Tour card at Second Stage qualifying in Brooksville, Fla. He finished tied for fourth at the first Second Stage event at Southern Hills Plantation Club, shooting a final-round 65 to end up at 15 under for the week. White’s finish left him comfortably inside the top 19 players advancing to the final stage on the Korn Ferry Tour qualifying circuit, locking up his fully exempt membership for the 2022 season.

The result marked the fulfillment of a promise close to a half-decade in the making for White, dating back to his collegiate days at Eastern Michigan. A promise that seemed impossible in the late summer months of 2017, when a bout with encephalitis — swelling of the brain — nearly took his life.

The beginning of White’s story is a familiar one — that of a young, talented golfer battling his way through the mini-tour ranks in pursuit of the ultimate goal, a spot on a major professional tour. In 2017, a year after he turned pro, White found himself on the PGA Tour Latinoamerica, a step below the traditional major professional tours (PGA and Korn Ferry). The first portion of his rookie season was promising, with five of nine cuts made and a pair of top-10 finishes to boot.

But then, as White first detailed to Golf Digest in late 2019, something went wrong. He began feeling ill, losing his sense of equilibrium and, at times, struggling to breathe. A prolonged hospital stay followed, followed by an official diagnosis of viral encephalitis brought on by mono. While White’s doctors were able to reduce the swelling and save his life, the virus ravaged his normal functions. He was unable to speak, had very little memory, and was temporarily paralyzed below the waist.

White spent the next three months re-learning to walk — a course of action that was not guaranteed to work. But eventually, after months of rehab, he began to recover, regaining his speech and his physical movement.

He re-entered the golf scene in 2018, competing mostly in mini-tour events in the United States. Slowly, his game returned — leading to a streak of victories in small events around the country. Last fall, White, of Grand Rapids, won his native Michigan Open.

White entered the Korn Ferry Tour qualifying series as something of a long shot. At 28 years old, he was far from the series’ youngest competitor, and other than his brief stint on the PGA Tour Latinoamerica in 2017, had never played in a Tour-sanctioned event.

He rolled through pre-qualifying, then rallied in First Stage to post scores of 65-69, finishing 10th and advancing into the next round. At Second Stage, White’s job was obvious (but no less daunting). Each of the top 19 finishers (and ties) at Second Stage advance to Final Stage qualifying, and most importantly, are guaranteed full Korn Ferry Tour status for the upcoming year.

Heading into Friday’s final round, White was close to the cutline. A strong Friday would push him over the threshold, but a repeat of his final round struggles in First Stage qualifying could be enough to knock him out of the picture. He was nervous out of the gate, making his third bogey of the week on the par-3 3rd hole. But then the floodgates opened. White made eight birdies in 15 bogey-free holes to close out his final round, vaulting him comfortably into the top-5 and securing his place at the center of one of golf’s great feel-good stories of 2021.

“I started with walking and as soon as I could walk I knew that I at least wanted to be able to golf again for my sanity,” White said after his victory at the Michigan Open. “I love the game of golf. I’ve done it my whole life. Probably like eight or nine weeks after I was out I thought, OK, things are starting to come together physically enough to where maybe I can golf at a high level again. I was going to attack it just like I did this tournament, one step at a time, one day at a time and try to get better every day.”

With his newfound status, Brett White won’t just compete in 2022, he’ll also work toward a chance at the PGA Tour. Even today, his path to the big show is plenty murky, but goodness, are you really going to start betting against him now?