Before long here, it’s going to be announced (we’re 99.9 percent sure): Tiger Woods is going to be a playing captain at the Presidents Cup next month. He’ll be the fourth of his four picks. Drag it out, for TV fun. Professional golf these days is golf-on-TV, or some of another kind.

Ditto for everything related to these international events, both the Presidents Cup and the Ryder Cup. Both those events will get a boost that will last for years, all because of the simple act of Tiger Woods being on this U.S. team. We’re talking the next 20 or 30 years.

The 2036 Ryder Cup is going to be at Congressional. That’s not even 17 years away! Tiger won’t be the captain of that team, but he’ll be around as an advisor, telling Little John Daly, Ryder Cup rookie, stories about Big John from back in the day.

Tiger’s going to figure out what Tony Jacklin figured out, what Connie Mack figured out, what Michael Jordan figured out: getting yourself connected to a team can keep you in the game in a meaningful way for years and years. Most people want to feel productive. It’s in our DNA. Tiger will always be driven by money. It’s in his nature. He will always be driven by competition. Ditto. And he will increasingly be driven by a desire to be on a team, to be attached to something bigger and more important than himself. Because he doesn’t have much experience in that, and it shows. 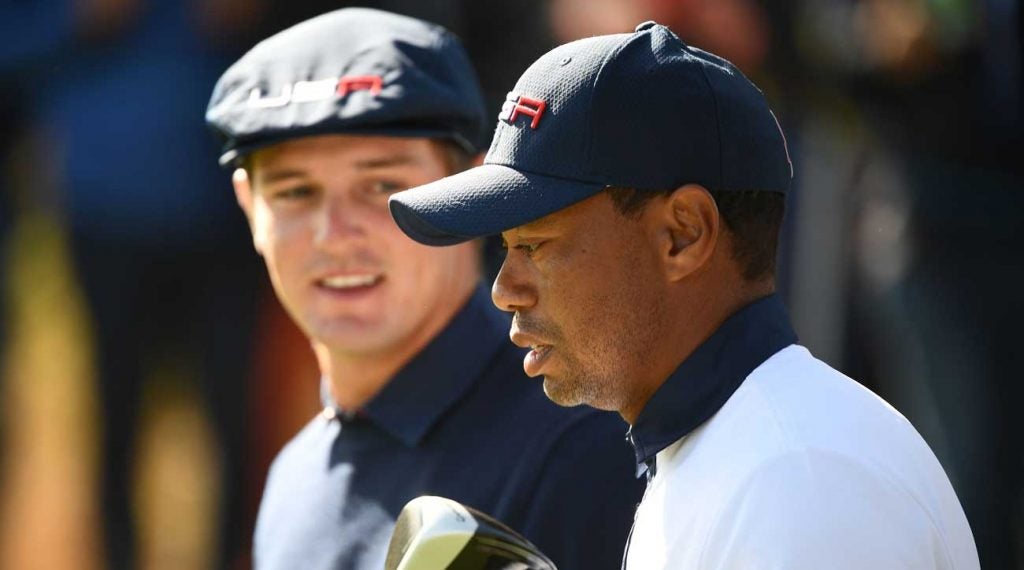 The lone-wolf life is OK, for a while. But being on a team is a far better way to live, in the long haul. Then, at the end, you’re alone again. Drop the needle on Joni Mitchell’s “The Circle Game,” if you’re so inclined. When Tiger drives himself to the course, you just know he’s rocking out to Joni.

It will be said, accurately, that Woods, as the U.S. captain, picked himself after lengthy consultations with three assistant captains, the eight players who made the team on points, various other elders in the game. But in the end that was all preamble. When Woods won in Japan last month, and boosted his world ranking to no. 6, and he barreled his way onto that team. There was no way he wasn’t going to be on it.

So for the next month, we dimple-heads will have ourselves a grand old time, trying to figure out how often Woods will put himself in the lineup over the four-day competition, and who he will pair himself with. As he reveals little about himself, those decisions will be telling.

Will Woods pair himself simply with the team member he enjoys playing with most, which would be Justin Thomas? Will he pair himself with the player who probably needs his imprimatur the most, which would be Bryson DeChambeau? Where will Tiger put himself in the Sunday singles? First, with the idea of getting that early point and cheerleading the rest of the day? Last, in case things get crazy and he can be the hero or the fall guy?

They say that Michael Jordan made more game-winning buzzer-beaters shots than anybody in NBA history, and that he missed more, too. Woods has taken more than one page from Jordan, so you can see him going off last. But first makes more sense.

The thing about Woods, he does things right in front our naked eye and we can’t see it for what it is. The reference here is to the win in Japan. That win was so much more than No. 82. It was the most recent in a continuing series, created by Tiger’s father, called Let the Legend Grow. (Eric Clapton wrote that theme song: “Let it Grow.”) The Zozo win got Woods on his team as a player, without debate. And the experience of being on this team will shape the rest of his life.

Check out this bit of odd thought-process logic.

We, both at the GOLF.com HQ and in our many satellite offices, do a Sunday-night thing called Tour Confidential. You can play at home, too. On the Sunday night (for us) after Tiger won No. 82, our own Josh Berhow offered this brain-teaser to the gang:

“It was just two months ago that Woods — who made his season debut at the Zozo — had his latest surgery, which came after a handful of rough starts. Given his health and playing drought, was this win more unexpected than his Masters victory?”

For most of us, it was more question than we could handle. Asked to consider the Masters and the Zozo at once was like trying to run the coffee-maker and the toaster at the same time. Overload! Only one of us saw the question for what it really was. For your consideration, Alan Bastable:

“Well, the question is … which one was more unexpected. Tiger was certainly playing better, more consistent golf in the run-up to Augusta than he was in the run-up to Chiba. So in that sense his inspired play at the Masters was easier to see coming. I had very low expectations for him at the Zozo—figured it was nothing more than a ‘reps’ week. I was wrong. As usual.”

AB had it right. Tiger was playing well going into Augusta. He wasn’t play at all going into the Zozo. The Zozo win was more unexpected.

But what you couldn’t appreciate then was how meaningful that win in Japan actually was, because it raised Tiger’s own connection to this Presidents Cup. It was going to be a bigger-than-normal Presidents Cup, with Tiger handling the U.S. team and the Ernie Els running the Internationals. And because it is being played at Royal Melbourne, designed by the co-designer of Augusta National, Alister MacKenzie. Because the U.S. actually lost there once, in 1998.