‘They can keep their money’: Kuchar’s fill-in caddie breaks silence over pay dispute

David Giral Ortiz, the diminutive Mexican caddie who goes by El Tucan, said in a recent phone interview that after being paid $5,000 by Matt Kuchar on the Sunday evening after the golfer won the Mayakoba Golf Classic on Nov. 11, he has not received any other payment.

The caddie said he was offered an additional $15,000, for a total of $20,000, but that he found that unacceptable. He also said he would not want to work for Kuchar at next year’s tournament.

For both player and caddie, the show-me-the-money aftermath of a magical week has been filled with frustration and disappointment. Ortiz feels he was underpaid. Kuchar feels he has made a fair offer to a club caddie who was with him for only one week. That the pay dispute has played out over social media without either party saying much of anything is a sign of the times.

In a Jan. 24 email Ortiz sent to Mark Steinberg, Kuchar’s agent, the caddie wrote, “I am a humble man, who takes care of his family, and works hard. I am reaching out to you to see if you can facilitate me receiving a fair amount for my help with Matt winning $1,296,000. I am not looking to disparage Matt or give him a bad name. Fair is fair, and I feel like I was taken advantage of by placing my trust in Matt.” 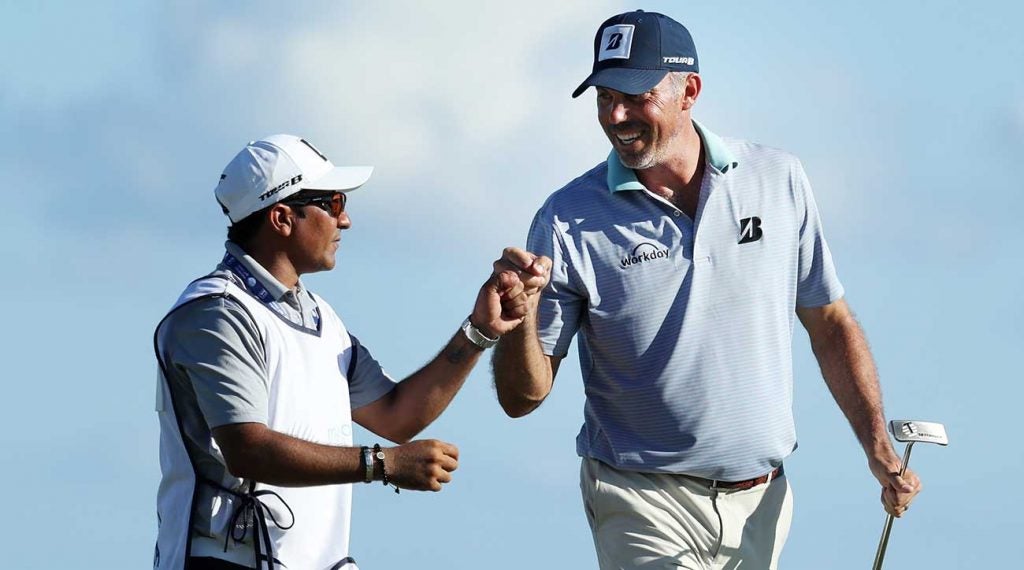 Ortiz, a 40-year-old father, as is Kuchar, said he wrote in Spanish and used Google Translate to turn his words into English. He also said he received help from Americans visiting Mayakoba, the Mexican resort where he works. Ortiz caddies at the El Camaleon Golf Club, in Playa del Carmen.

Asked how he felt about the offer to receive what he said would be an additional and final $15,000 payment, Ortiz said, “No thank you. They can keep their money.”

In response to an email from GOLF.com to Kuchar and Steinberg seeking comment, Steinberg wrote on Monday, “The “reports [sic] on what Matt’s caddie was offered are wildly inaccurate. However, it is inappropriate to discuss those amounts publicly.”

Steinberg also represents Tiger Woods and Justin Rose, among others.

Matt is a good person and a great player. He treated me very well. I am only disappointed by how it all finished.

Ortiz said he did not expect to be paid what a Tour caddie would have made, but said he believed his work and contribution toward the win was worth $50,000. The win was Kuchar’s first in more than four years. He has made over $46 million in Tour prize money in his career and is 10th on the career money list.

Speaking through a translator, Ortiz said, “Matt is a good person and a great player. He treated me very well. I am only disappointed by how it all finished.”

Shortly after the tournament, Ortiz said he hoped and expected to work for Kuchar when he defends his title this year. Asked recently if he would want to caddie for Kuchar again, Ortiz said, “No thank you. I’m a little bit pissed, a little bit confused.”

Ortiz said he wrote to Steinberg because he did not have contact information for Kuchar. He shared with GOLF.com three emails he sent to Steinberg, one on Jan. 24, one on Jan. 29 and one on Feb. 5. He said he has received one email from Steinberg, on Jan. 29, which read, “I am out of the country. What Matt has offered is fair.” (The offer of the additional $15,000, Ortiz said, was extended from Kuchar’s camp through a Mayakoba Classic representative.)

Ortiz, a full-time club caddie, was filling in for Kuchar’s regular caddie, John Wood, who did not make the trip to Mexico.

A $3,000 weekly payment for a fill-in local caddie would widely be considered generous pay by Tour standards. The sticking point is the size of the bonus. A Tour caddie typically receives five percent of a player’s winnings, a higher percentage for a top-10 finish and 10 percent for a win. These arrangements are usually handshake deals.

Ortiz said that Kuchar said at the start of the tournament that he would be paid $3,000 for the week, plus an unspecified percentage of his winnings.

On that basis, in the euphoria of victory, Ortiz had hoped to make as much as $130,000. When Kuchar left Mexico, the caddie said, he was under the impression that he would still receive a bonus.

By Sunday night of the tournament, Kuchar’s smiling face was sunburned and covered in stubble. He and Ortiz posed for pictures together with the winner’s trophy. Later, Ortiz said the golfer handed him an envelope with his payment in cash in it and said, ”There you go. Thank you. Bye.”

In January, at the Sony Open in Honolulu, Kuchar was asked by reporters about what he had paid Ortiz. He said, “That’s not a story. It wasn’t 10 percent. It wasn’t $3,000.” 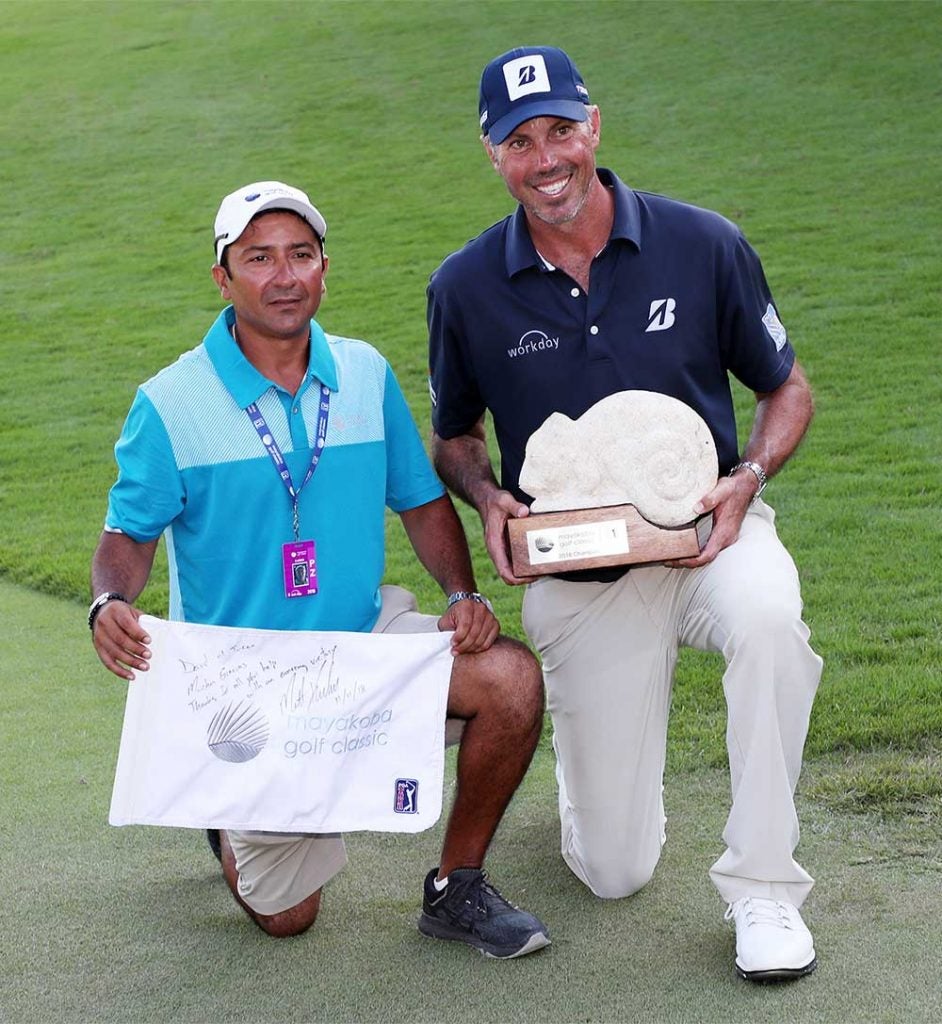 The payment dispute became Tour fodder when Tom Gillis, a former Tour player, tweeted about it in January. Ortiz said he did not know how Gillis heard about it. He also said he was offended by some of the comments he read about the dispute. “I read, ‘That’s a lot of money, for a Mexican,’” referring to Gillis’s initial claim, that Ortiz was paid $3,000. But Ortiz also said he had read many supportive messages on social media.

Ortiz lives in a small cinderblock house that is a 20-minute bus ride to the course. He said with a more substantial payment, he and his common-law wife had hoped to start a laundromat. As for the $5,000 he made, Ortiz said most of it had been spent on painting the house, buying new curtains and a mirror for it and flying his young daughter home from Veracruz, Mexico, for Christmas. He said his caddie services at the Mayakoba resort were in higher demand since Kuchar’s win there. He said he makes as much as $200 on a good day as a club caddie, though half that is more typical.

In victory, Kuchar said of Ortiz, “He was definitely my lucky charm. He brought me good luck and certainly some extra crowd support and did a great job as well. He did just what I was hoping for and looking for.”

In an interview after the tournament, Ortiz said the most useful thing he said to Kuchar came on Sunday on the back nine. “’You need to calm down,’” Ortiz said he told him. “He was very nervous.”

The first ending was a happy one. The second was not. Ortiz said he still hoped to receive another $45,000 from Kuchar, for a total of $50,000, the sum he thinks is a fair share of Kuchar’s $1.3 million first-place check.

“Maybe I will,” he said. He acknowledged that it is more likely he won’t.