Triumph and tragedy at Q-School: Stolen clubs, late rallies, clutch birdies and disaster on No. 18 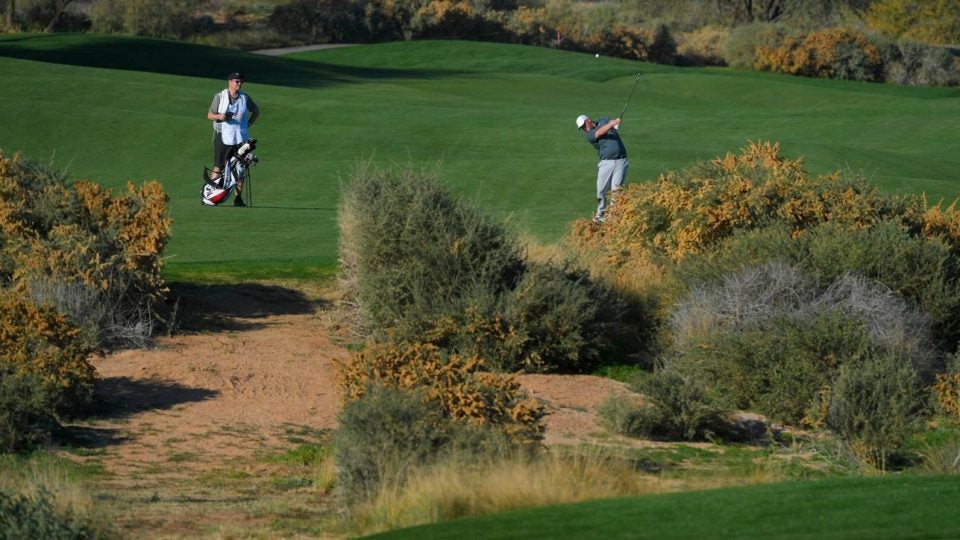 The final round of Web.com tour Q-school took place on Sunday.

Sunday’s final stage of Web.com tour Q-School brought with it the reminder that at the margins of professional golf, the line between triumph and failure is razor-thin. Here are some of the Sunday stories from each side of that line.

First, a quick reminder of how this all works:

Final Stage of #WebTour Q-School is winding down …

Let’s start with Danny Walker, a Mackenzie Tour player who played his way into the mix and then slammed the door with birdies on his final three holes, closes in six-under 30 on his final nine to win the entire event. That meant holding off a hard-charging much-heralded Norman Xiong by a single shot, and it means Walker will have full Web.com status for 2019. It also meant capping off a 33-birdie week; touche, Mr. Walker.

Cody Blick and the case of the missing clubs

Cody Blick experienced a nightmarish Sunday morning in which he put out a plea on Instagram for the return of his golf clubs, even offering a $5,000 cash reward. Things didn’t look good for Blick; even with his own clubs, he sat at 10 under, outside the cut line, and needed a major rally.

But then, using a set of sticks that included the course superintendent’s driver, pro shop wedges, a ‘random’ set of irons, and a putter heavier than his, Blick did the unthinkable. He shot 63 anyway, closing with three clutch birdies in what he said afterward was “the weirdest week of my life, hands down.” The round of nine-under sent him into a share of 25th place and was enough to impress personalities from across the golf world, including Justin Thomas.

One of the coolest stories I have heard. Congrats to Cody and everybody who earned their @WebDotComTour cards today! https://t.co/Vlu5ECswDU

Tim Wilkinson birdied the first hole. He parred the second. And then he birdied eight holes in a row to get to nine under for his round through 10 holes. He added one more on No. 17 and posted 10-under 62, catapulting himself a full 50 spots up the leaderboard to finish T16.

Steve LeBrun, a 40-year-old veteran, finished with five birdies in a row — five! — to cap off a 62 of his own and sneak inside the top 40 on the number. He went from T83 to T34 with the finishing flurry. Hat tip, too, to Jack Maguire, who birdied his final four holes to finish off a 64 that got him in on the number.

What an amazing day today! Final day 62 with birdies on the last five holes to finish on the number and secure first 8 events next year on ⁦@WebDotComTour⁩. With God all things are possible. pic.twitter.com/EQHkUVIoqr

Three players bogeyed their final hole to drop to 17 under, a single shot outside the top 40: Joseph Winslow, Yuwa Kosaihira, and Lee Hodges. During a week with so many low numbers, 72nd-hole bogeys were especially heartbreaking.

Patrick Sullivan accomplished a rare feat by making a different score relative to par on each of his last five holes (we call this the large straight). But double bogey-bogey-birdie-eagle-par left him tragically one shot shy of the cut line; his finishing two-under 70 dropped him 27 spots on the leaderboard to finish T50.

The way it went down is far worse: Sullivan’s double bogey came as a result of his putting the ball off the green and…into the water.

We've heard all the QSchool horror stories over the years. I was wondering if anyone had ever putted it into the water on the back nine to miss by one? If not…..dibs. 🙋‍♂️

Just as heartbreaking was his par on 18, which was nearly birdie after he stiffed his approach shot and left himself this putt to complete his rally and make it through. But the four-footer didn’t go. You’re sadly correct, Patrick. This is the worst story of Q-School this year.

The fine line can be cruel.

Patrick Sullivan (@sullivangolf) went birdie-eagle on holes 16 and 17 Sunday to move within a shot of the current projected top-40.

This was his birdie try at the last. pic.twitter.com/jSlnrf55ni

Benjamin Alvarado went seriously deep on Sunday, firing another 10-under 62 to jump from T93 into contention — but needed one more shot to sneak into the top 40. His consolation is much-improved conditional status.

Much-heralded amateur Braden Thornberry, the 2017 NCAA Champion out of Mississippi, fell four shots shy of the 18-under cut line and is expected to return to school. He had made earlier comments suggesting he’d turn pro if he had secured status. The other amateur in the field, Minwoo Lee, finished T67, a single shot ahead of Thornberry.

Every single player who finished in the top 40 shot an under-par final round. Just five players in the entire field shot over par on Sunday. Of those players, Spence Fulford fell the furthest, dropping from a secure position in T23 all the way to T85 with a finishing two-over 74.