Like most of us, pro golfers have been hibernating. With no golf and social distancing in place, there’s been a lot of time spent at home. With that in mind, teacher Claude Harmon III decided to hold an Instagram Live session with Brooks Koepka on Wednesday.

And while you might not be able to catch it before it erases from Harmon’s Instagram feed, the hour-long chat was a lively one with plenty of interesting and funny nuggets. It consisted of Harmon and viewers peppering Koepka with questions. Much was covered — dinner with Brandel Chamblee, the 2019 Masters, Patrick Reed, Lil Wayne, his mindset during majors and more. Here’s what you missed.

He was hungover for the chat. “I did 30 days of no drinking. Didn’t last 31. I feel great. I mean, I’m not gonna lie, I feel hungover today. But it was good. I feel really good. My body feels good. It’s just nice to be healthy and making steps in the right direction.”

Dinner with Brandel Chamblee? Koepka was asked by a fan if he’d go out to dinner with Chamblee if he asked (they have a little history). His answer? “Hell no. Hell no. That’s a definite no. He then told a story about last year’s Open at Royal Portrush where they had to get into the same golf cart. “I was like, ‘Do you wanna get out, I’ll sit there,'” Koepka said. “He didn’t say anything.”

Koepka decided to specialize in golf around 8th grade. “I remember in middle school playing high school basketball and then realized I had no chance, and this was for a small Christian school,” he said. “We weren’t playing anybody, but that fact that I was starting shows you how good of a basketball school we were.” 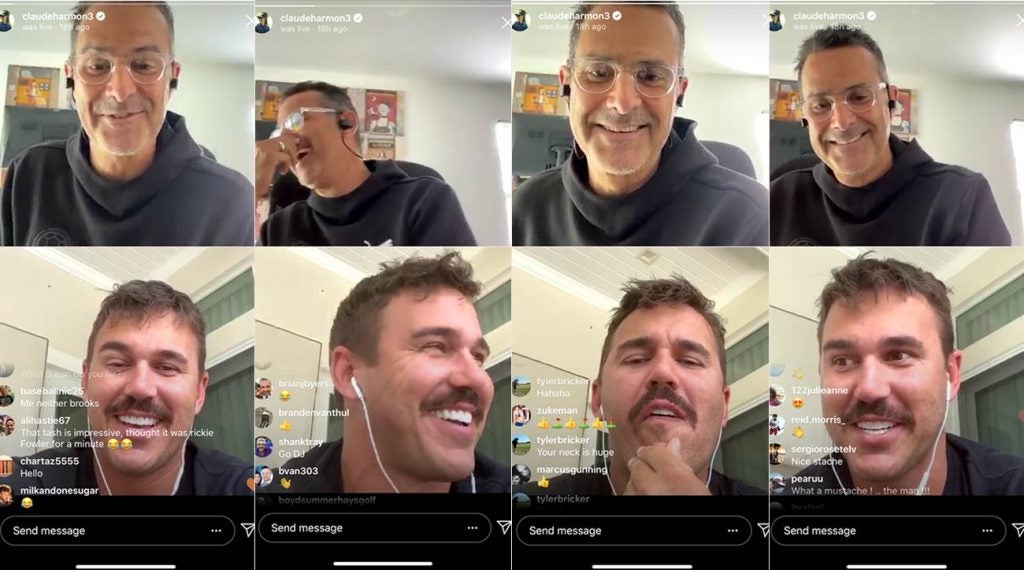 He didn’t exactly go to Florida State to study. “I never opened a book in college. I’m sorry. My coaches, tutors are all probably so mad right now. I’ll be honest, I was there to play golf. I knew what I wanted to do.” Koepka said one year there was a morning class he always skipped on Thursdays. He missed so many tests that the professor told him he could take a make-up one consisting of 10 true and false questions. He handed it back. “She just said, ‘You gotta be kidding me, right? You got none of them right.'” Harmon added that this story was told before, one time in Hartford during Travelers Championship week when Bryson DeChambeau, who had just turned pro, was standing nearby. Harmon said DeChambeau was trying to figure out the probability of the odds of getting them all wrong. “I forgot what the probability was, but it was unbelievable the odds of getting every one wrong,” Koepka said.

The chip on the shoulder everyone talks about was there in college too. Koepka was a huge Florida Gators fan growing up and didn’t get many scholarship offers. He was always miffed he didn’t get a chance to play for the Gators. “OK, well I’m gonna show Buddy Alexander, the coach at Florida (then), ‘Hey, you really screwed up not recruiting me.’ And that’s what my life’s always been. There’s always been a chip on my shoulder and always something to prove to somebody.”

Koepka also said he needed all four years of college to mature. “You look back at it now, and I was a little s—head.”

He rewatched the 2019 Masters — and his water ball on 12 — at his dad’s house on Easter. Like everyone else who was supposed to be there, Koepka wasn’t at Augusta National on Easter Sunday, which was supposed to be the final round of the Masters. But his did, a huge golf fan, wanted to watch the replay of the 2019 final round anyway. Koepka says he still wouldn’t take back the shot he hit on 12, which turned into a double bogey. “In the air I was loving it and licking my chops and thinking I was going to make a birdie here — ‘Dude this is going to be great, I know they are all watching, this is your chance.’ And then it didn’t pitch on the green.”

Koepka also almost created what would have been an epic Masters moment. Koepka was in the mix late on Sunday despite dropping a ball in Rae’s Creek and doubling the 12th hole, but he eagled 13 and had a chance to grab the solo lead at 15 when he faced another eagle putt. He couldn’t believe it when he missed. He tapped in for birdie and made it a five-way tie for the lead at 12 under. Thing is, Koepka was so confident he was going to make that eagle putt, he even told his caddie, Ricky Elliott, a celebration strategy before he hit it. “I remember saying to him, ‘I’m going to point at Tiger if I make this thing,’ and I still to this day can’t believe that putt missed.” Koepka finished one shot behind Woods, in a three-way tie for second.

He’s not firing at as many flags as you’d think. “Anything inside of a 9-iron, 165 yards and in, is usually a go. But with that being said, if it’s a left pin with water on the left, I’m not going to go for it,” Koepka said. Koepka said he goes after just three or four pins during major rounds. “Conservatively aggressive,” is what Harmon and Koepka like to call it.

Harmon irons all of Koepka’s clothes at majors. That’s it.

Koepka says it’s harder to get onto the Tour than it is to keep your card. Opportunity is a big difference, he says, as is the ability to feel comfortable in those uncomfortable situations. “There’s not really much of a difference between guys playing mini-tour golf or whatever it might be and the guy who is just keeping his card,” he said. “It’s a little bit of a break going their way.”

His crew flew to Las Vegas after he won the U.S. Open at Erin Hills and he met Lil Wayne. The group went out for dinner one night but the restaurant said they couldn’t bring the trophy in with them. They tried to explain that the U.S. Open trophy is a big deal, but that didn’t work, either. Instead they left it by the hostess stand. Luckily it was still there when they left, although they almost lost part of it on the way home. Koepka said he was mad at his caddie for bringing the trophy out since he assumed they’d break it or ding it or something. “Sure enough,” Koepka says, “early morning, Rick coming back, a lady comes up and says, ‘Hey, is this yours?’ It’s the top of U.S. Open trophy that had fallen off.” The highlight came the next day, when Koepka was doing a phone interview and heard some commotion in the hallway. He noticed three guys walking toward him. Two, he said, were about 6-foot-8 and 350 pounds, and the guy in the middle was about 5-6. “Holy s—, that’s Lil Wayne,” he said. “And I just completely forgot about the interview and what I was doing. I like stuttered. I didn’t know what to say.”

He said Patrick Reed’s short game is “a joke” it’s so good, and he also cleared up some of the Koepka-Reed controversy from the past few months. “I think that’s one thing that’s been super misconstrued over the last couple of months,” he said. “Just because I said I thought he cheated. But also at the same time, that’s who I’d love to play Ryder Cup matches with. People are obviously going to give him s—, but I couldn’t care less. I’m gonna be right there, and if someone’s going to get in his face I’ll be there, too. He wouldn’t need (caddie) Kessler (Karain).”

He was a huge Adam Scott fan growing up, even more so than Tiger. “I have the biggest man crush on Scotty ever,” he said. “I love Scotty. Scotty was my idol. He’s an even better dude when you meet him and talk to him. Genuinely one of the nicest human beings I’ve ever been around.”

Who is the one player to never play in a Ryder Cup that he’d pick to be his partner right now? “I like Matthew Wolff; I love Matthew Wolff,” he said. “He’s a cool kid, number one. He’s fun to play with, and I think he’s going to be really good.”

Rory McIlroy hitting driver never gets old. “It might be the greatest weapon of any player in this generation,” Koepka said.