The PGA Tour’s West Coast swing continues this week, moving from the hard-partying Scottsdale desert to the genteel, seaside confines of Monterey, Calif.

This year’s celebrity roster is brimming with big names, and why not, when Pebble Beach, Spyglass Hill and Monterey Peninsula Country Club are on the itinerary. Here are 14 familiar faces to look for on the links this week. You can view the full list of celebrity participants here.

The Fox anchor captained his college golf team at DePauw University in Indiana, and says he still maintains a 5 handicap.

The NBC host won the Pro-Am portion of the tournament with Ken Duke in 2017. Even more proof of his golf chops? He told Kingdom magazine he dropped out of college when he was 18 to try to qualify for the U.S. Open.

The Arizona Cardinals wide receiver says he’s a 10 or 11 handicap, and he’s so serious about the game, he packs a cut-off shaft during road weeks so he can practice his swing.

The Great One is no stranger to the AT&T field. Must be a nice feeling when you know you’ll be teeing it up with the world’s No. 1 player (and future son-in-law), Dustin Johnson.

The blue-collar comedian says he used to hate golf, but credits Boo Weekley with getting him into the game.

The Pebble Beach Pro-Am mainstay dazzles with both his wit and his wardrobe. Rodgers strengthens the NFL contingent of the week’s proceedings with a reported 4.0 handicap index.

​The former Georgetown player turned SI swimsuit model and actress was one of GOLF’s Most Beautiful Women in 2016. The comedian and Haney Project alum loves the game, but says, “I still pretty much stink.”

​The retired Cowboys quarterback turned CBS broadcaster is serious about golf. (He’s attempted to qualify for the U.S. Open several times.) And Jim Nantz recently revealed he’ll be given a sponsor’s exemption into an upcoming PGA Tour event. 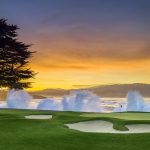 You may also like Pebble Beach: The ultimate golfer’s guide of where to play, stay, eat

The former Hootie & the Blowfish frontman is a single-digit handicap and hosts an annual post-Masters pro-am.