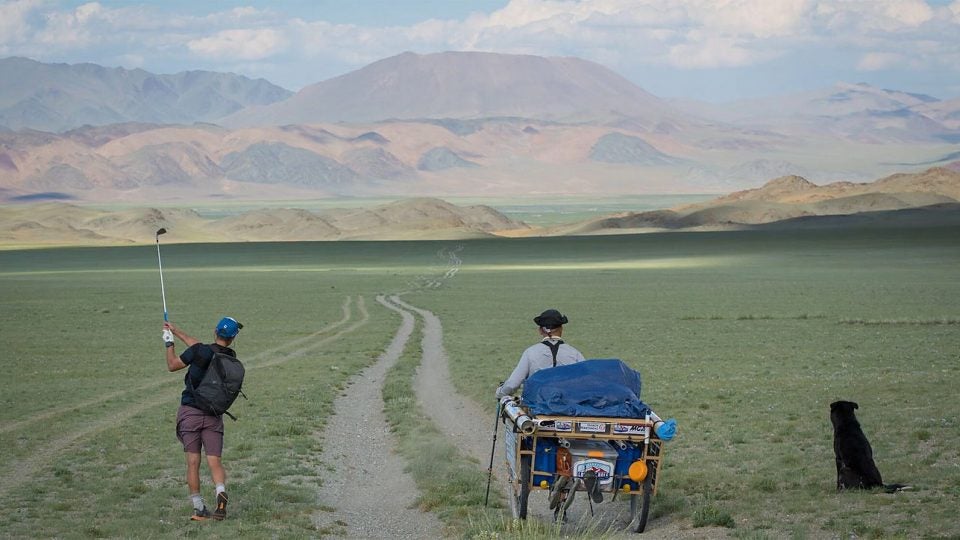 Here’s a record that could last a while.

On Saturday afternoon, Adam Rolston, a 28-year-old former rugby player from Northern Ireland, coolly drained a 7-footer on the 18th green a Mt. Bogd Golf Club in Ulaanbaatar, Mongolia, to complete the longest golf hole in history, as first reported by the Telegraph.

“We have had dozens of people telling us we were mad or crazy, with comments ranging from: ‘That’s impossible’ to ‘Do you not have anything better to do?'” Rolston said. “It’s been awesome and it’s been tough. You can relate it to rugby, you don’t enjoy every minute of it but when you look back on things you enjoy the tough things you do in life.”

Rolston linked up with rugby friend Ron Rutland to serve as his caddie, and together they set up an 80-day trip across Mongolia to raise money for children’s sports charities. Rolston had previously completed a bicycle ride through each country in Africa in a similar charity initiative, and he began this journey at Khüiten Peak, the highest and westernmost point of Mongolia. Together Rolston and Rutland trekked east to the nation’s lone golf course, passing through swamps, hills, rivers and desert along the way. He lost dozens of golf balls (but less than 150 of the 400 he took) and his supply cart nearly tipped over in the final hours, but he made it. All told, it took 80 days to complete the trip, and they raised more than $20,000 for charity.

The European Tour sanctioned the adventure, and it will reportedly qualify for the Guinness Book of World Records.

Even after completing an arduous journey while averaging about 250 shots per day, Rolston still isn’t done with the sport.

“I definitely want to keep playing when I get back,” he said. “I’ve been super-pumped about playing golf every day. I might hit fewer balls when I get back, but I will still be addicted to the game as much as I ever have been.”