What’s a hat worth? What to know about golfers’ most prime marketing turf 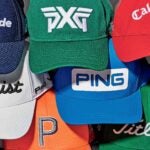 Whoever said the best things in life are free wasn’t a golfer. Dropping dollars on the game we love is a price we’re always willing to pay, as long as the price is right. That’s why we dubbed the latest issue of GOLF Magazine “The Money Issue” and dedicated dozens of pages to smartly investing in your game. You can pick up the Sept./Oct. issue of GOLF Magazine at a nearby store, or subscribe here.

1. In 1968, appliance maker Amana launched the first hat sponsorship program on the PGA Tour. In addition to paying players $50 per week to wear its logo, the company also offered health insurance.

2. According to the PGA Tour’s Player Endorsement Policy, the logo on one’s hat cannot exceed 3 inches by 5 inches.

3. Valspar sponsors a $500,000 season-long bonus pool for PGA Tour caddies who wear its logo on their hat. The program was launched in 2014 by the Tour’s Official Paint Supplier.

6. Ollie Schniederjans is one of the few pros who forgoes hat money by playing bareheaded.

7. Tiger Woods wore a straw hat to win the 1994 U.S. Amateur. He famously rallied from 5 down with 12 holes to play to defeat Trip Kuehne at TPC Sawgrass.