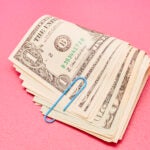 At the golf course, cash is still king.

Welcome to Stuff Golfers Should Know, a GOLF.com series in which we’re taking a departure from traditional swing instruction to reveal all kinds of other useful golf (and life!) wisdom that is sure to make you the smartest, savviest player in your foursome.

Spring is springing in Seattle. The sun shows its face at a reasonable morning hour. Nine holes after work is becoming a reasonable possibility. The GHIN system is officially accepting scores. The proper golf season is here.

My assignment here was to fill you in on five items you absolutely need to have in your golf bag — but I’m hardly the expert in that category, because I’m always missing at least one crucial thing. I’m more likely to be the annoying playing partner fumbling around for a coin on the first green or realizing I’ve run out of tees midway through the back nine. So instead of lecturing you on the items that only I, a wise and all-knowing golf writer, would know to include, I’ll fill you in on a few of the things that I keep forgetting and regretting.

Assuming you lot are more competent than me, I’ll leave golf balls, tees and even ball markers off the list. Same with gloves, snacks, drinks, layers, rangefinder and even Sharpie. Y’all got those. Here’s what’s left:

I’m down to play golf in basically any weather. There are plenty of remedies for cold, wind and rain; you can layer up with waterproof gear, throw a beanie on, take two extra clubs, get one of those quarterback-style pouches or add some Bailey’s to your coffee. As long as you’re not too precious about your score, rugged golf still rules.

But my limiting factor is the temperature of my hands. Whether because of bad circulation or something else I don’t fully understand, when the temperature drops my hands slowly stop functioning. If I’m caught unprepared, I spend most of my round blowing warm air into my hand like I’m pitching middle-relief on a chilly night at Fenway Park in mid-October. But hand-warmers are an absolute game-changer. They’ll last an entire round, they’ll keep the numbness at bay and they’re cheap, too: A pro shop might gauge you but a quick Google search reveals that you can get 10 pairs of HotHands for less than six bucks (I found ’em here!).

I’ve got a pair of Footjoy winter gloves that I deploy when the temps demand it; toss a HotHands in each one and I’m happy as could be. The only thing left is not to leave ’em in the car.

Or lip balm, if you prefer. Cold or windy golf can dry you right out. Hot or sunny golf can do the same. Once you wish you’d put on chapstick, it’s already too late. I’d recommend storing at least three in your golf bag because nothing disappears faster or more inexplicably.

Even before the pandemic hit, we were living in an increasingly cash-free world. Over the last year, touch-free payments have become the norm basically everywhere. But as the world begins returning to some new form of normalcy, you might want to remember to make an ATM stop. Depending on where you’re playing golf (and who you’re playing with), cash is king.

A few weeks ago, I played golf in Florida with colleague Sean Zak, who’s almost always more detail-oriented than me. But on this occasion he was the one bumming sunscreen out of the supply in my bag. When you’re coming from Seattle — or, in his case, Chicago — the Florida sun can hit harder than you expect. Screen up.

I’m not talking about like, a clip-on mini-towel that hangs from the side of your bag. I’m talking about a real towel; gimme something with some surface area. This might be a controversial opinion, but I think no golf bag is complete without a large towel draped between irons.

How else will you be able to dry your hands, wipe off sweat, deal with sunscreen, clean your irons and wipe off your golf ball with the same item? There’s nothing more versatile than a giant towel. And there are few things worse than being marooned mid-round without one.

PS — The only thing I consistently remember to pack are extra socks. I’m the king of backup socks. Join the movement.

Check out our Pro Shop!