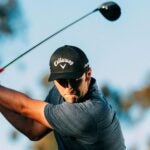 Rahm's move means he knows what the ball is going to do, every time.

Pat Perez has played with a lot of talented golfers over the course of his journeyman career, including the most talented of them all: Tiger Woods. The pair are the same age and first crossed paths in junior golf. It all gives him a unique perspective on today’s current crop of talented golfers, and speaking on this week’s episode of Claude Harmon III’s GOLF.com podcast “Off Course,” his verdict is clear: Jon Rahm, he says, the best of them all.

Perez has been playing with Rahm since he was on the college golf team at Arizona State, and pegged him for stardom then.

“He doesn’t shoot over 64 every time we play, no matter what going on.,” he said. “He was fearless, he hits it phenomenal, and he could hit all the shots.”

At the core of why Perez admires Rahm’s game so much is his golf swing.

“He knows that the ball is going to do every time,” Perez says of Rahm’s signature left-to-right fade. “He doesn’t try to change it, and as he got on tour he got more and more comfortable with it. He just knows what’s going to happen.”

“This guy’s never going to be out of the top 10 if he doesn’t get hurt which, with his action the way that it is, I don’t think he can get hurt,” he says. “It’s repeatable, there’s not a lot of stress. Unless he screws up his knee or something, he’s going to be on top for a long time.”

Listen to the full episode on Spotify below: