If your miss is a hook, try this simple swing thought to fix it 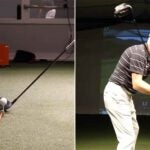 A hook is caused by an in-to-out path combined with a shut clubface.

While a slice is by far the most common miss for recreational golfers, there are still some players out there that have the opposite problem. Instead of getting too steep and coming over the top, they come from too far inside, producing a hook.

Worse yet, a hook is a maddening miss to deal with. While a push fade lands softly and doesn’t get much run, a hook gets on the grounds and just keeps going. It makes the ball nearly impossible to control, and brings lost balls and out of bounds in play on nearly every swing.

The good news for those who hook the ball is that your swing is close. An inside-out swing path is what you want, all you need to learn is to control it.

For help with that, GOLF Top 100 Teacher Jonathan Yarwood has a simple swig thought that will straighten out your hooks and have you hitting it better than ever.

First and foremost, check and make sure your grip is not too strong, causing a shut clubface. If it is, your hook will only worsen.

“You don’t want this thing too Dustin Johnson-esque,” Yarwood says. “You’ll end up the rest of the time just reacting to it.”

Once you make sure your grip is all set, it’s time to focus on your downswing. Specifically, how you initiate your move to the ball from the top.

“A little key move coming down is feeling like this lead arm moves away from your lead shoulder at the start of your swing,” he says. “Then you start to spin your body open a little earlier.”

This move gets the clubhead more out in front of you and helps steepen the downswing, which will help straighten out your hook.

“If anything, I should start to work it [to the right] a little bit,” Yarwood says. “Get rid of those hooks once and for all.”