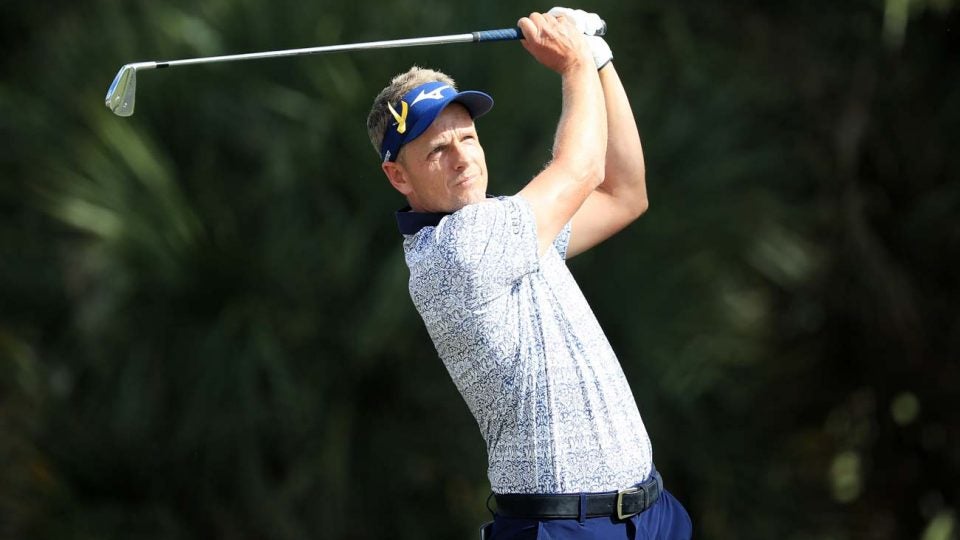 Luke Donald is using his social distancing time to benefit his (and his social media follower’s) golf game. It started a few weeks ago with a post on his Instagram with Donald asking his followers to submit requests for him to cover in short video lessons.

“While I know many of you are missing your sport, me included, thought I would do some video golf tips for you all,” the post said. “Comment below anything golf related that you would like me to address, I’ll pick a few and post some videos in the coming weeks! Stay safe, stay healthy and keep social distancing so we can get back to normalcy.”

While I know many of you are missing your sport, me included, thought I would do some video golf tips for you all – comment below anything golf related that you would like me to address, I’ll pick a few and post some videos in the coming weeks! Stay safe, stay healthy and keep social distancing so we can get back to normalcy 👊🏼🙏🏼 #askLD #golftips

The post garnered nearly 25,000 views and had plenty of engagement from stir crazy golfers around the world. Here are five drills and keys to work on from the former World No. 1:

There may be few players in the world better than Donald to teach their secrets on lag putting. In 2011 — the same year he ascended to No. 1 in the world — he went 483 holes without a three-putt. Pretty impressive stuff. So when Donald offers up tips on lag putting, you’d better listen.

“One of the biggest keys to lag putting is speed control,” Donald says. “And the best way to get the best speed control is solid contact.”

Place two tees directly in front of the ball wide enough so the ball can fit through, but not wide enough for your putter to swing through. Then hit some putts with a longer backswing than the follow through. This will give you a “pop” stroke, which promotes solid contact.

After each sequence, back up another six feet and repeat.

“If you can do that, you’re really dialing in your speed and you’re going to create a lot of opportunities where you’re not going to three-putt, and that’s going to save you a lot of shots,” Donald says.

So today’s tip is a request from @daltonquik and a few others also asked for this! Lag putting – probably one of the easiest ways to save strokes off your score! PGA Tour pros make 99.9% of putts from inside 3 feet so lagging putts close to the hole is going to give you a great opportunity not to 3 putt. Solid contact is key to good speed control and this box drill is a great way to dial in your speed and feel. Try this at home or when you can next get out on the course! Props to @patgossnugolf for coming up with this drill #LDTips #lagputting #speedcontrol #nomore3putts #boxdrill #483 #puttingdrills #staysafe

This is a simple drill you can do inside your own home. All you need is a club, a wall and some sort of ball to hit. The drill is designed to hell you feel the proper club path on a simple pitch shot.

“A lot of people get this wrong,” Donald says. “They tend to get the club too far inside. Hands go out and they’ll hit the wall, and you don’t want that.”

To fix this, keep your butt against the wall and take the club back making sure the clubhead stays outside your hands. Then when you follow through the clubhead should exit more towards the left with a full body rotation.

“If you can do this consistently, it’s going to really help with your strike,” Donald says.

Here is a very simple way to check your path in pitching when you are stuck inside. A few 🔑’s 1) Arms swing back with very little body rotation – make sure the head of the club is slightly outside your hands (too inside and you hit the wall) – keep loft on club – toe of the club more up towards the sky 2) Because you are hitting down on the ball, the path of the club exits slightly to the left on the way down. Body and club release together so club effectively finishes parallel to the wall. Having the correct path in pitching will really help you with your contact, using the bounce effectively, creating a better strike which = more spin and control #LDTips #insidepractice #pitching #path #stayhealthy #staysafe

If you don’t properly shallow out the club coming into impact, you might be plagued with the dreaded slice. It’s a common fault among amateurs, so Donald decided to tackle the issue with a simple drill.

“Most of the time it happens from people really throwing their hands towards the ball from the top,” Donald says. “This shaft steepens and causes that big left-to-right shot.”

For this drill, grab a towel and find a large window in your home. Get into a golf posture and with your trail arm place the towel up against the window. Take a backswing and then when initiating the downswing, try to really turn the trail shoulder down and rotate the towel on the window. After you rehearse the feeling a few times, take a club and try to replicate that feeling of external rotation in your trail shoulder.

Shallowing the club from the top of the backswing is something I’ve struggled with at times in my career, it’s certainly been a big focus of mine of late & thanks to the help of my trainer @ben.shear we’ve come up with some great exercises in the gym to help me increase my external rotation range of my right shoulder & make @patgossnugolf job a little easier 😁 Shallowing the club from the top will not only help to eliminate that dreaded slice, it will also allow you to fully release everything at impact which will increase your speed and distance. Give this simple at home exercise a try #LDTips #homeimprovement #golf #shallowingtheclub #externalrotation #stayhome #stayinside #stayhealthy

Everyone wants to play the low shot that takes a couple hops and stops on a dime, but few people can actually pull it off. Luckily, the fix can be simple and it starts with your setup. Here are five tips Donald recommends to hit the spinning pitch shot.

Probably one of the toughest shots for amateurs to pull off – the biggest mistake is in your set up usually. Everyone in the past has been told to stand way open with the ball back in your stance and the handle forward which puts you in a position where you feel you have to loft the ball in the air. You want the following: 1) Ball forward of center 2) Weight just a little left 3) Handle centered 4) Open club face then take your grip with a weaker left hand 5) Path is a little more out going back (club head outside your hands) Hitting down to get the ball in the air is very critical here – let the loft of the club (this is my 60 deg LW) do the work. Swing down and thru and let the loft of your wedge create the height with a short sharp motion. Enjoy the ending 😃#LDTips #golfathome #spinnypitch #joggers #staysafe #stayhealthy

Posture is a basic fundamental in golf, but lots of amateur players don’t know what proper posture looks and feels like.

“It’s not really that fancy or fun, but if you can nail the basics, you’re going to see improvements,” Donald says.

Most amateurs tend to bend at the knees too much and let their upper body get too upright. This mistake makes it difficult to make a full turn in the upper body.

“In a good setup, you really want to tip from the hips,” Donald says.

Another thing to look at is to see if you are tipping your right shoulder slightly down at address. With the right hand being lower on the club than the left hand, you should see some tip upward at address.

“That allows you to, when you turn, you’re turning behind the golf ball,” Donald says. “Just make sure you’re very diligent about this very basic of things in your golf swing.” 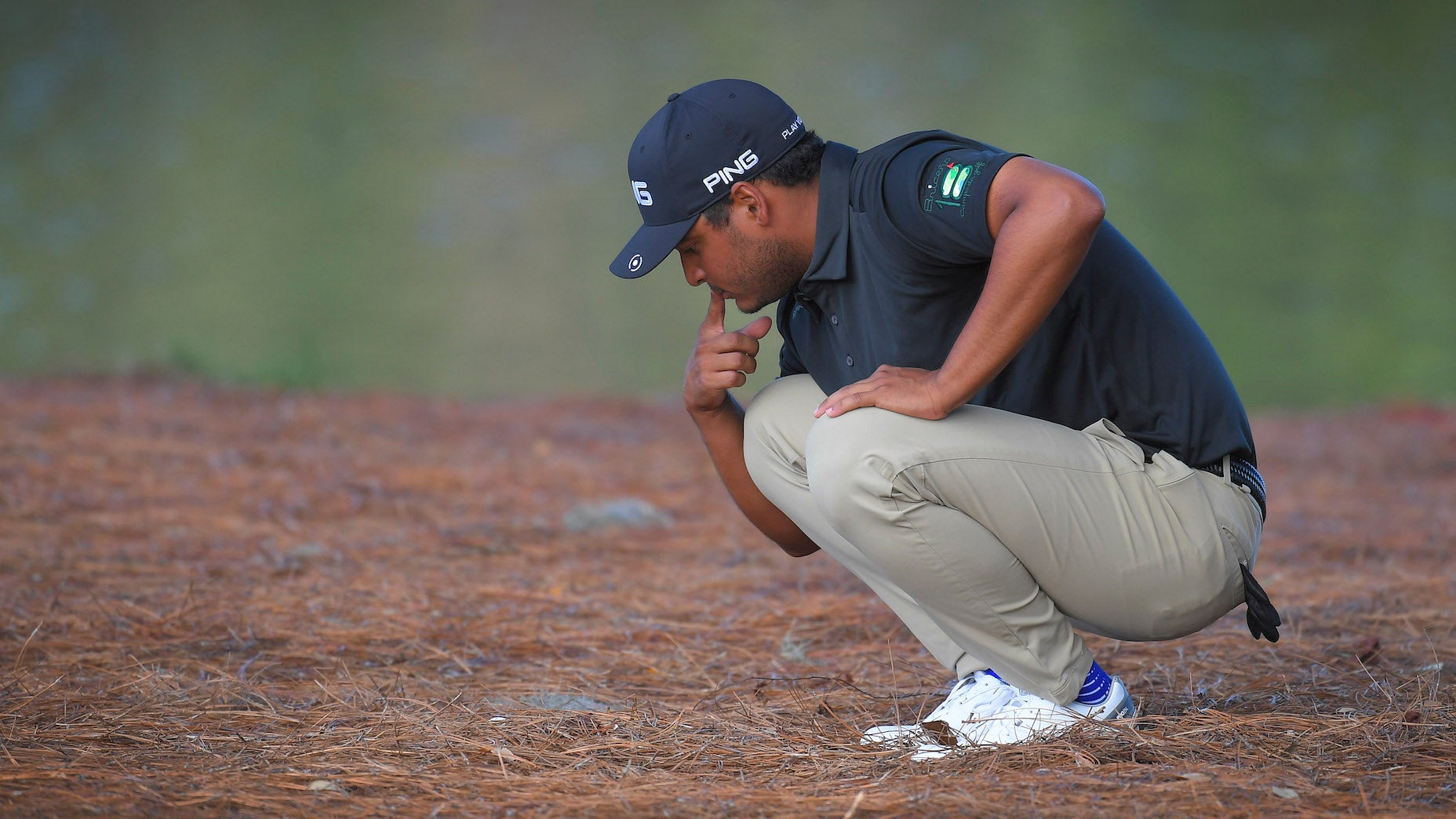 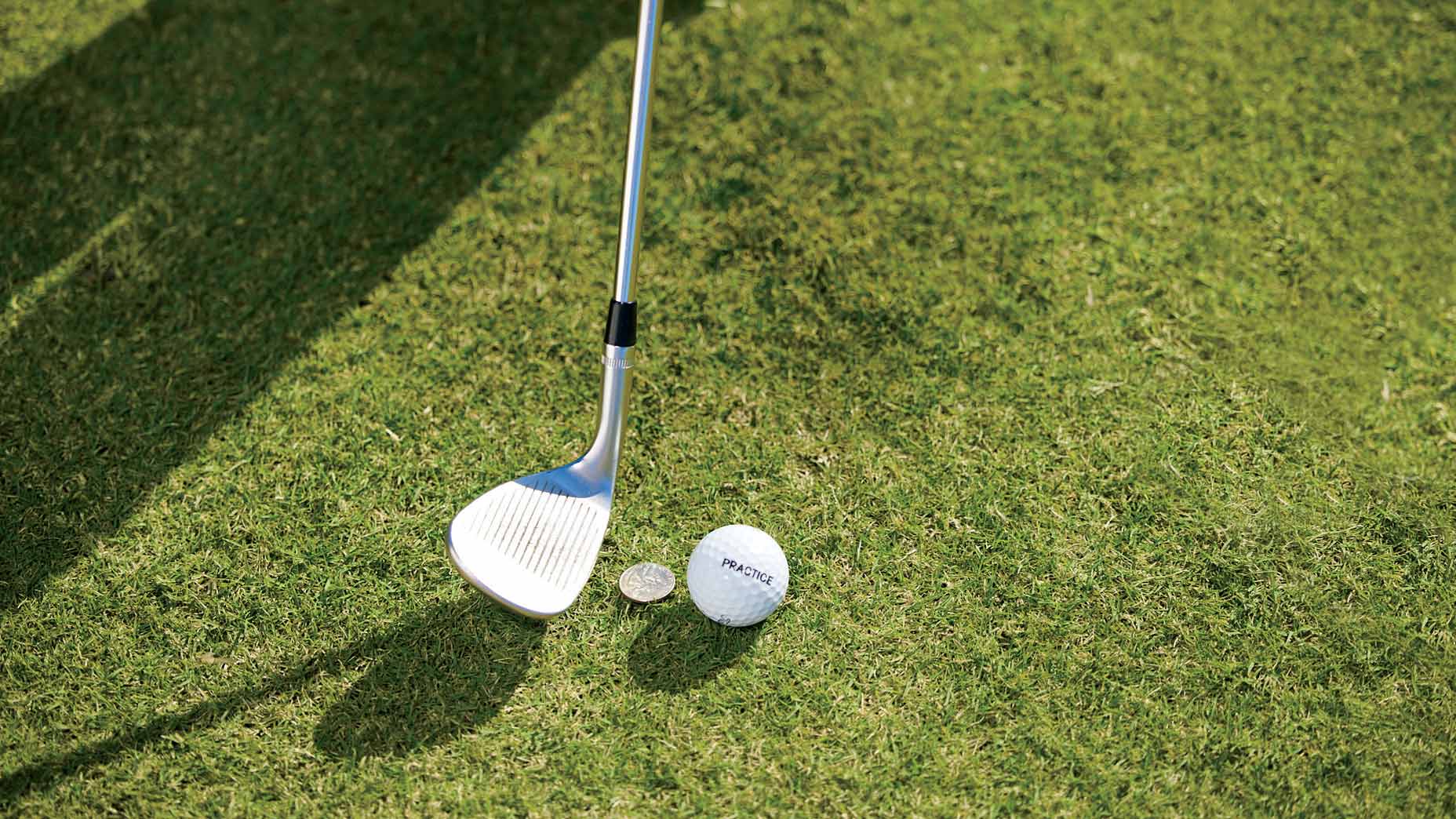 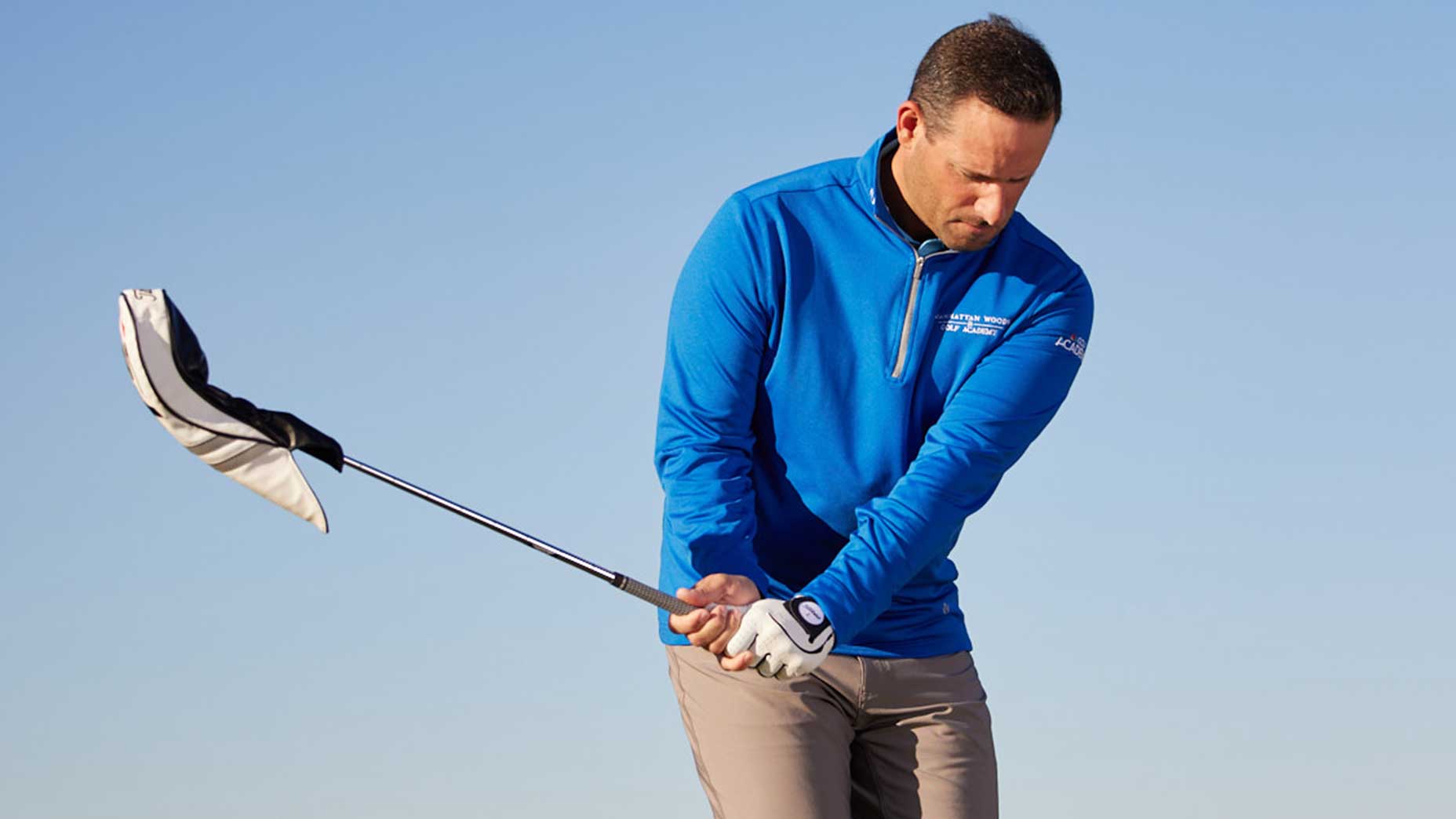 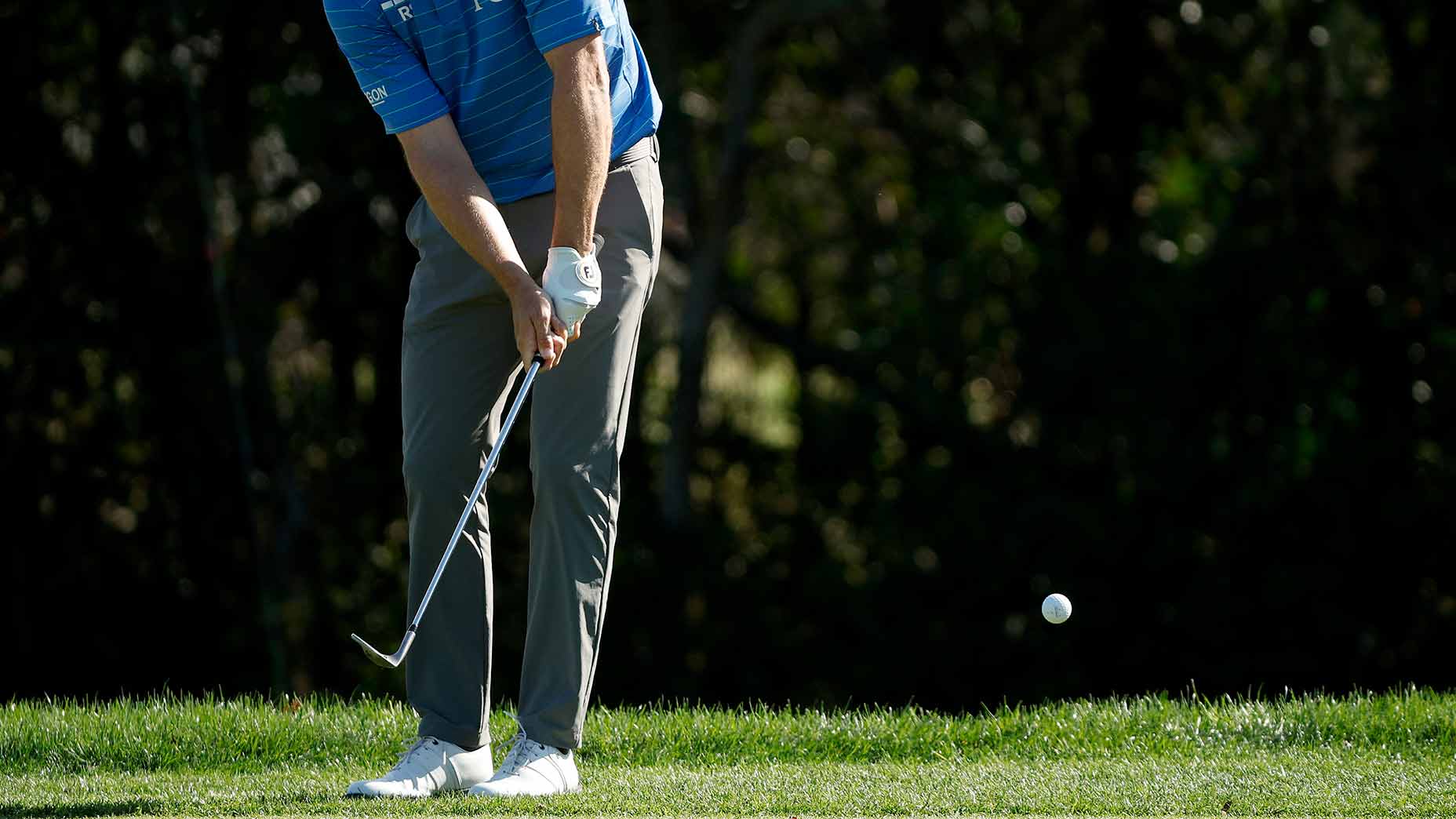 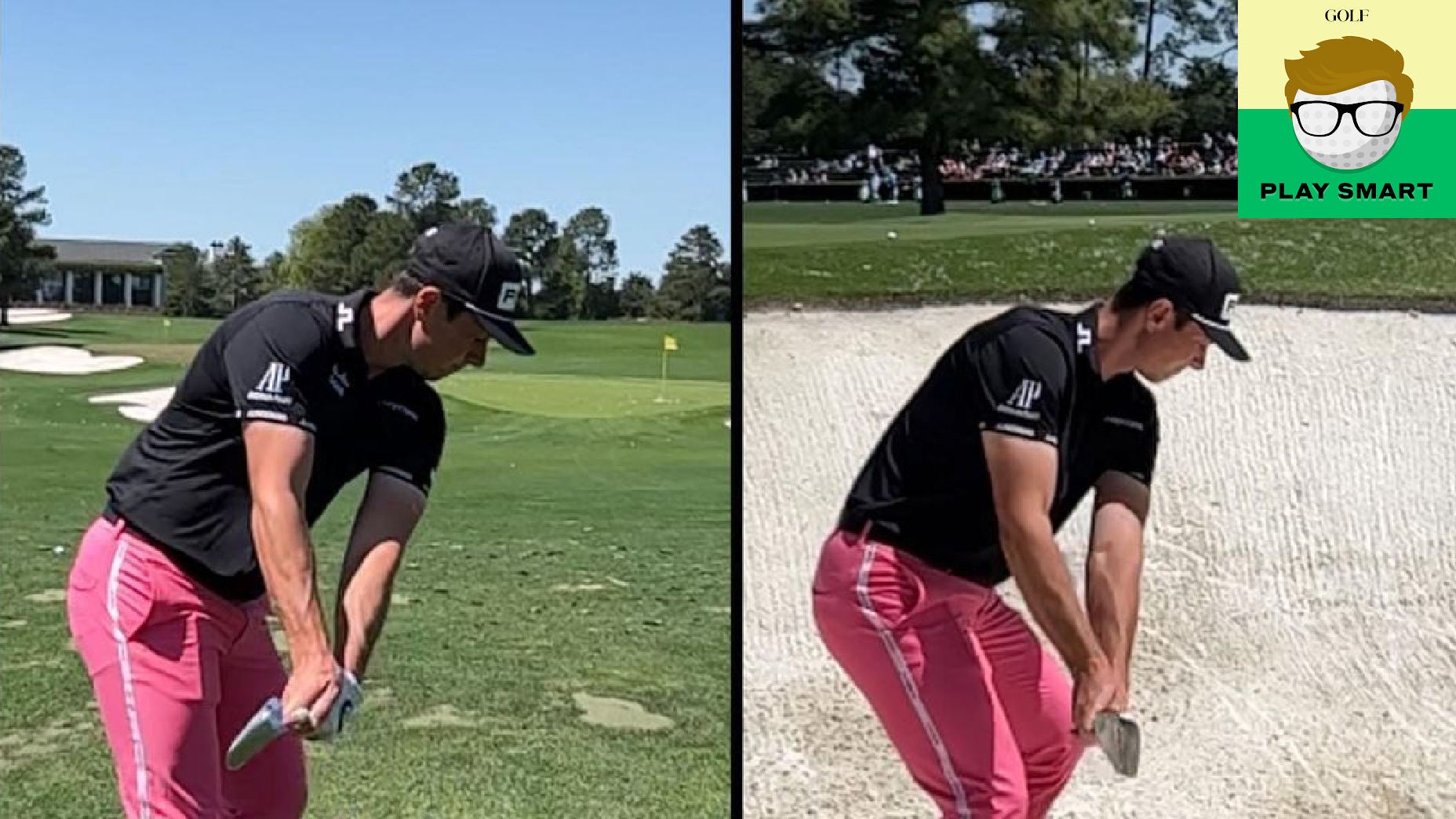