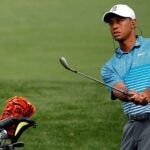 Tiger Woods has a very particular way he likes to warm up with his short irons.

As Claude Harmon noted on this week’s episode of Off Course with Claude Harmon, more people have walked on the moon than have coached Tiger Woods. One of the lucky few who has: Sean Foley, whose guest appearance in front of a live audience at GOLF’s Top 100 Teacher Summit at Pinehurst was full of interesting tidbits about the art of instructing the world’s best players.

Foley spent four years with Woods, from 2010-2014, during which Woods won eight times. Foley has a true insider’s perspective on what it was like to witness Woods’ greatness up close, and one of the many things he said impressed him about Woods was the particular way he warmed up with his short irons.

“Tiger fully believed that you should be able to get through your whole wedge practice and your whole short-iron practice without hitting the ground,” Foley said. “So he would literally hit a hundred balls and there wouldn’t be one divot or any sign that his feet had been on the ground whatsoever.”

“My dad used to have him hit balls off of the putting green at Rio Secco,” said Harmon, whose father, Butch, was Woods’ swing coach for 11 years. “And he would hit 4-irons off the putting green and honestly, you couldn’t really — you’d kind of see a little indention — this was ’99, 2000, 2001.”

“I just think all that led to his complete ownership of pin-high,” Foley said. “I’m not saying taking a divot’s a bad thing. Sergio Garcia is one of my favorite ballstrikers I’ve ever seen. Sergio could probably sit there off the green and clip it too. But just to be able to watch the control that he had of his trajectory when he did that, I found it really fascinating.”

For more from Foley, including why he thinks he over-coached Woods, and how Lydia Ko managed to regain her world-beating form, check out the full interview below.

Rules Guy: Can I tape my average yardages to my clubheads?