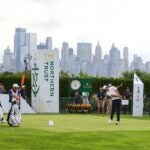 Scottie Scheffler hits his tee shot on Thursday on the 1st hole at Liberty National.

Scottie Scheffler, he revealed after Thursday’s first round at the Northern Trust, recently had to fill out a questionnaire as one of the hopefuls for the U.S. Ryder Cup team. “What are you good at, what are you bad at,” he described the assignment sent out by captain Steve Stricker. “I think so he can get a feel for all the guys.”

This could fall under “good.”

Scheffler, on the par-4 15th at Liberty National, hit his tee shot in the thick stuff left of the fairway, and his second shot into the even thicker stuff even farther left. Then, in both a rare and honest scene, he’d hit two balls.

With the help of players, caddies, fans and officials, Scheffler would find his second shot. Sort of. According to Rule 18.2, players are allowed only a three-minute search, and there was some question how long Scheffler’s was.

“I mean, I hit my second shot just short left of the green, probably 30 yards short from the front edge,” Scheffler said afterward. “I had like 75 pin, and then we couldn’t figure it out.”

According to Golf Channel’s Rex Hoggard, Scheffler and a rules official determined that Scheffler would play both the first ball and a second one, from where he originally hit his second shot, and under a one-stroke penalty. Hoggard reported that after the round, Schefler and playing partner Daniel Berger then agreed that the search was over three minutes, and he would take the score from the second ball, a double-bogey 6.

“They didn’t have data or ShotLink data or anything, so just went with it was over three minutes,” said Scheffler, who finished with a one-under 70.