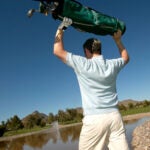 Usually, I like to focus these columns on the science of game improvement. Explaining the stuff that won’t just help you play better golf, but will help you understand it, too.

But today, we’re going to explore science of a different sort: The science of etiquette. Specifically, how it relates to the real-world problem of what to do when your playing partner explodes into a fit of rage.

We all know a golfer like that. Players who we enjoy playing with, but run a little too hot when things aren’t going their way on the course. It makes things uncomfortable, and it’s not always easy to know what to do next.

So, to help with that, I consulted the resident group of low-handicaps around the GOLF.com offices…

Dylan Dethier (+3.3 handicap): I have no patience for this guy. Frustration is totally fine, especially in short bursts. And everybody has a bad day now and again. But one of your main duties on the golf course is to be a part of the team that is your foursome. If someone’s down, you help bring ‘em back up. If you’re feeling down, make sure you’re still a net positive — or at least a net negative.

So what’s the solution? For this guy, brutal honesty. Buy him a beer and tell him he doesn’t seem like he’s having much fun on the course, and you’d like to help him have more fun. If that’s too subtle, be straight with him and let him know that YOU aren’t having much fun playing with him. And if nothing changes, it’s time to find a different golf buddy. Time on the course is limited and precious. No room for wet blankets.

Luke Kerr-Dineen (2.5 handicap): Though in my heart I know Dylan is right, my half-Britishness balks at the idea of such direct confrontation, even when it’s warranted. As such, I prefer a more subtle approach, laced with instinctive British passive-aggression. When you spot the meltdown coming, acknowledge it in a light-hearted way. “Well, you may not hit the ball like Jon Rahm, but you certainly have his club slam technique perfected,” sort of thing.

Ultimately, the cause your fellow golfer’s anger is that they’re take themselves too seriously, so take aim at that. Chances are with a little subtle shaming, they’ll realize they’re acting poorly. All without avoiding any awkward confrontations.

Ashley Mayo (3.1 handicap): There are two types of golfers that are unbearable to play with—the slow golfer and the angry golfer. To deal with the angry golfer, I’d say that if you play fewer than a couple rounds per year with this guy you should just ignore his antics. Just think of it as entertainment and chuckle, keeping in mind that you should always avoid exhibiting those behaviors yourself. But if you play golf with him often, I’d encourage you to be honest with him. Let him know that his anger outweighs all the benefits of his company. Empathize with him and find out if there are deeper-seeded issues at play, then take the time to let him know, with sincere honesty, that it’d be far more pleasant to play with him should he channel his anger in more positive ways.

Zephyr Melton (5.5 handicap): Hand them a beer? Playing with a grouch is no fun, and it makes for an uncomfortable round. There’s nothing wrong with being honest with them. Let them know that you don’t like playing with someone in such a bad mood. Gotta play it straight on this one.

Josh Sens (6 handicap): As with so much social etiquette, on and off the course, a lot depends on what kind of relationship you have with him. If you consider him a friend, you owe it to him–and to yourself–to be honest with him. Tell him, Dude, you might not realize it, but your toddler act is a downer for everyone around you (you might also trot out the old line about how he’s not good enough to get so angry). With any luck, he’ll take it as constructive feedback and try to temper his temper. If you’re not especially close with him, or he’s not open to your input, your best bet is simply to avoid playing with him. Seriously. Life’s too short–and golf’s too fun–to put up with that kind of nonsense.