How positive visualization and imagery can improve your golf game 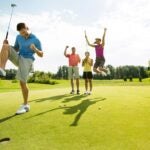 Positive visualizations can serve a great benefit to your golf game.

All great athletes have the ability to visualize themselves in a situation before they get there. According to Nick Faldo, “Visualization is the most powerful thing we have.” To me, a healthy imagination is the genesis of everything good, and the power of an image is immeasurable.

Picture that post-round, ice-cold drink on a hot summer’s day. You can see it; you can almost taste it; you can feel the relief it brings. All of those sensations are a figment of your imagination, yet they seem so real. They seem so real that they will direct your actions toward fulfilling that end — this is evidence of how your mind prepares your body to achieve a goal.

It is this indescribable power inside of you that I want to help you unlock over my next few columns.

While imagery isn’t a guarantee to instant success, it certainly is a guarantee to put the wheels in motion toward it. Consider this quote sent to me by Dr. Mike Grevlos, professor of psychology at the University of Sioux Falls, “Imagery mirrors perception and action.  In fact, the same neurons fire during imagery that fire during the actual experience.  So, mental practice or imagined performance have real effects.”

In a recent “On the Mark” podcast, Brad Brewer (co-founder of the Arnold Palmer Golf Academies) shared an anecdote of how Mr. Palmer, while in the wintery climate of Latrobe, Pa., would prepare for the Masters by visualizing every shot he would play and how he would play each hole. In other words, his preparation began with visualization and imagery.

Many moons ago Ben Crenshaw shared a memorable image with me while I was with my brother at the Masters. We were discussing the value of starting putts on line and various ideas and theories to achieve that end.

I pitched my idea to Crenshaw of picking a spot (down the target line, about 2-3 feet in front of the ball) to roll the ball over. He was animated at my description and exclaimed that he loved the idea. He did however take slight issue with it that he felt it was a little too difficult and perhaps too precise a task. He went on to explain that the precision it required could lead to tension which would compromise the rhythm and flow of the stroke. He also explained that there is always more than one route into the hole depending of the speed of the ball, so being less pedantic about a spot was more up his alley.

To that, he laid this beautiful image on me: Imagine a paintbrush, with the width as wide as the cup, that has painted a bright stripe along the line toward the cup. The goal is to roll the ball along that painted “road” all the way to the cup.

Go and try this beautiful, simple image when you are next working on your putting. Stand behind your golf ball and look down the line of the putt; read the break, imagine the shape of the road and the journey of the ball, including where its apex is located, toward the hole, and while still behind the ball, fix your gaze on the bright road and allow your eyes to drift down the middle of it toward the hole. You may find that your practice strokes become directed by the image you have conjured in your mind.

Once you have seen it and felt it, address the ball and roll it down your paint stripe. If you fail to keep it on your line, move on to a completely different putt; no block practice over the same putt. Keep to the routine and soon you will begin to see success.