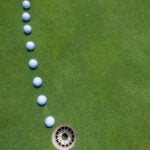 Playing too much break is always better than playing too little.

What you do need to hit are lots of predictable shots. If you know what the golf ball is about to do before you hit it, you can depend on it. You can plod your way around a golf course that way — and probably shoot a good score at the end of it. It may be boring, but that’s ok. Boring golf often is good golf.

When it comes to predicability and dependability, you can’t do better than the literal laws of physics.

Gravity. It hasn’t failed us (yet), and it’s something you can use to your benefit on the golf course.

As any golfer who has hit a downhill or uphill putt before will know, gravity has an obvious effect on the golf ball when moving up and down slopes.

Interestingly, it also plays a bigger role when you’re working in the direction gravity is pulling, rather than against it. That means that if a robot were to hit two 10-foot putts, one uphill and one downhill, with the same level of power, the downhill 10 footer would roll a foot farther than the uphill 10 footer, as putting coach James Jankowski outlines here.

In layman’s terms: Putts will roll more when they’re rolling downhill than their uphill equivalent, so be extra careful.

That’s pretty intuitive when hitting something downhill, but golfers don’t always think about how that effects our golf ball when we’re sending it across a hill. Which is why Aimpoint inventor Mark Sweeney, as he highlighted on Instagram recently, has some advice: When in doubt, play more break.

As we just outlined, when a ball is rolling downhill, it’ll roll slightly farther than its uphill equivalent. That’s what makes under-reading a breaking putt the worst-possible mistake: Not only is every inch the ball rolls going to leave you with a longer distance on your next putt, you’re going to get unfairly punished for even a slight under-read of your putt, and unfairly rewarded for an over-read mistake.

All because of the wonders of gravity. It’s there to help you or hurt you, depending on how you use it. Take all the help you can get on the course, even if it means utilizing factors far outside of your control. So if you think a putt is going to break left, aim more right than you think. Always err on the side of playing more break: You’ll be happy you did.