The misunderstanding that has been costing golfers power for generations 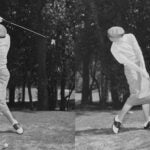 Look at the LPGA Tour’s career wins leaderboard, and you’ll find one name comfortable among the very top: Louise Suggs. She won 61 times between 1946 and 1962, with 11 majors. And she did it with one of the smoothest, most powerful swings ever to grace the tour.

When it comes to smooth speed, Louise Suggs is the undisputed 🐐 pic.twitter.com/2GGHnErROU

Along the way, Suggs divulged her methods in a book called “Par Golf for Women.” Ben Hogan wrote the forward, and in it divulged some high praise: “If I were to single out one woman in the world today as a model for any other woman aspiring to ideal golf form, it would be Miss Suggs,” he wrote. “Her swing combines all the desirable elements of efficiency, timing and coordination.”

I got my hands on one of the first edition copies of the book via eBay and have been making my way through it at a pretty rapid clip. There’s so much gold within, but her section on “playing the drive” was my personal favorite.

“Remember this: the ills that throw a golf swing out of kilter develop in the course of the backswing,” she writes at one point. “If the backswing is faulty, it is impossible to hit the ball consistently straight and far. Any good results obtained under these circumstances are purely accidental.”

“They have been warned: ‘Keep your head down. Keep your eye on the ball. Don’t move your head.’ This leads them to keep it in a fixed position which is completely unnatural.”

Suggs writes that she wants golfers to make as big a turn as possible on the backswing, and she wants that without moving your head much from side to side. She also wants you to keep your eye on the ball on the backswing, but for golfers who aren’t flexible, that poses a problem: “It is humanly impossible to turn your shoulders … and still keep your face pointed straight down at the ground. In doing this, you would disastrously restrict the backswing.”

To avoid this and still get the benefits of a powerful turn, Suggs says to turn your head away from the target on your backswing as you turn, which will free your shoulders.

“It is true you must not move your head. It is untrue you must not turn it. It helps you to understand the head in relation to the rest of the golf swing if you think of it as the hub around which revolves the spokes (which are in this case the arms),” she says.

It was a key to Suggs’ effortless power, and one of those simple tips that you can only find by talking a stroll back into the archive.