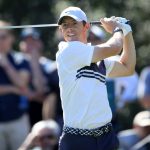 When the USGA/R&A distance insights project was released in February, it set off what might generously be called a heated debate. In 102 pages and 56 supplemental reports, the governing bodies — to no one’s surprise — found that the ball is going farther and courses have been getting longer. Not so clear is the answer to this question: For the pros, has the advantage of longer driving distance changed over time and by how much?

Long hitters like Jack Nicklaus, Greg Norman, Fred Couples and Rory McIlroy (above) have always had an advantage. Shorter hitters like Corey Pavin, Luke Donald, Matt Kuchar and Jim Furyk always found ways to excel. In February, Webb Simpson won the Waste Management Phoenix Open in spite of ranking outside the top 130 in driving distance on Tour this year. Small-sample anecdotal evidence might provide some clues, but it can’t provide many compelling answers. Analytics, applied to millions of shots in the ShotLink database, can do just that.

Over the period from 2004 to 2018, I found that about 20 percent of the scoring advantage of the top 40 players was attributable to longer driving. Though results fluctuate each season, the trend over that time period was significant: The scoring advantage of longer driving increased from 15 percent to 25 percent from 2004 to 2018. Since these players gained an average of 1.5 strokes per round, their added length off the tee accounted for about a 0.25-stroke advantage in 2004 and a 0.4-stroke advantage in 2018 — a significant shift in the relatively short ShotLink era. That careful analysis is consistent with the observation that nine of the current world top 10 are certified bombers.

Augusta National was lengthened about 500 yards after 2000. These (and other changes) became known as “Tiger-proofing,” a reference to lengthening the course to prevent Tiger from hitting driver-pitching wedge into par-5 holes. Again, using the ShotLink data, I analyzed the advantage of bombers by hole length for par 4s and par 5s. Their scoring advantage doubled as hole lengths went from 400 to 600 yards. (Bombers also had a bigger advantage on drivable par 4s compared to 400-yard holes.) Longer courses increase the advantage of longer hitters, the opposite of what the term Tiger-proofing suggests.

Analytics can be used to more accurately quantify the changes that are happening in golf. What to do, if anything, about these distance issues requires careful consideration of many relevant factors and the impact on many interested constituents, and that’s well above my pay grade.

What football and golf have in common, according to a Top 100 Teacher

Women's Fitness Tips: 6 mobility exercises every golfer should be doing