The difference between an open-to-closed golf swing, and a closed-to-open swing 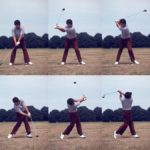 I’m into the the heart of my second week in Dublin, OH and it certainly has been an eventful time of it, especially on the golf course. Indeed, the Workday Charity Open was a barnstormer and the duel down the stretch between Collin Morikawa and Justin Thomas was thrilling.

Off the course, things have been quiet for me.  I have spent a lot of time in the hotel room, reading, watching TV, podcasting, and making appearances on CBS Sports HQ.  Giving online golf lessons, via the Skillest App, has also kept me occupied, and there was one specific lesson that reinvigorated a debate that has raged inside my head for a long time.

It’s an important question to consider, because where the clubface is pointing at impact, along with the swing direction, will determine where the ball goes.

Personally, I like the idea of the ability to be able to slam the clubface shut on the downswing and through impact, without the fear of closing it too much and hooking the ball. To me that essentially reduces the tendency of a pulled shot and a two way miss.

Nowadays though, a number of highly respected instructors will argue otherwise and a number of leading golfers play from shut to open.  To a certain extent I agree with this approach as the theory of reducing the rate of clubface closure through impact, and hence this approach has merit.

Ultimately, it all depends on what helps you get that clubface squared through the impact zone.

Here are some examples of each:

Indeed both styles have their advantages and disadvantages, but the truth is that the most important thing is the ability to repeat whatever the chosen style is under pressure.

Finally, remember there is a point of diminishing returns to both methods.  One can certainly be too open or too closed making it impossible to consistently square the club through impact.

All I can tell you for sure is that “one size does not fit all.”