We can all learn a thing or two from Ben Hogan's swing.

Through the years I have developed a strong appreciation for the golf swings of the dominant players.  I have spent days, weeks, and years of my life studying and learning what the best golfers do. They hold the key to this game. If you look closely, then you will see common threads emerge.

Modern technology has helped us understand the golf swing more effectively than ever before and social media has breathed new life into these ideas. After years of teachers watching their students get worse and injured, they embraced the idea of more movement in the golf swing. Movements that the legends displayed. For example, they observed that lifting the lead heel provided less restriction, faster swings, and hitting the ball longer.

Unfortunately, many bad ideas still persist that are not based on the common techniques employed by the greatest golfers.

Bobby Jones, one of the greatest of all time, dominated his era with one of the longest and smoothest swings of all time. He preached a long flowing golf swing his entire life and was legendary for his booming drives. Whether we are talking about MacDonald Smith, Walter Hagen, or Bobby Jones, the key elements of their respective swings were largely the same.

Great players learn through observation and imitation. Bobby Jones was correct, which led to the rise of powerful swings. Sam Snead and Ben Hogan had powerful swings and were dominant players at the time. Later on, players like Jack Nicklaus, Johnny Miller, Tom Watson, and Bob Toski were lifting the left heel and making full hip and shoulder turns.

At the same time, many golf instructors preached that shortening your swing will lead to straighter shots. This was particularly true in the United Kingdom, where a more compact swing was pioneered. This compact swing was partly a product of trying to keep the ball under the wind and closer to the firm ground on the links. They thought you could swing shorter and hit the ball harder. Steel shafts were also lowering the dispersion and allowing players to muscle the ball – and get away with it! There was also a trend to promote shorter swings for more accuracy. Even the great Ben Hogan’s book 5 Lessons spoke about restricting the hips. Although, he clearly had a full hip turn and lifted his lead heel. A lot of young professionals and instructors latched onto this idea that a compact swing was better.

The seeds were sown. Restricting the lower body and creating a compact golf swing were the guiding principles. Tom Kite switched to a planted left heel. Soon thereafter so did Nick Faldo and Nick Price. They experienced success and these techniques linger today.

For most of recent golf history, instructors have pushed for simplicity. They want to simplify everything about the swing until it is so simple that golfers are left with nothing.

I want to change this narrative and help golfers realize their natural athletic ability. When you learn the golf swing correctly, you will hit the ball farther and straighter.

The Essence of a Good Golf Swing!

A good golf swing is one that has a continuous flow of motion with a full turn of the hips and shoulders, minimal hip slide, and a proper sequence. These movements allow golfers to utilize athletic movements. Learn them correctly and you will produce a tremendous amount of power and consistency – more than you ever thought possible.

You will be making a bigger turn on the back swing, which will lead to a more dynamic transition and a more powerful impact position. This type of swing will make playing golf more fun.

The bad ideas of the past have led many golfers to doubt what they are capable of. This is especially true for my senior students.

Frequently, senior players have been told they are not flexible enough to make a full swing. I rarely observe this as true. Once my senior students are shown how to move, they realize they can make a full unrestricted hip and shoulder turn. They are blown away by the amount of motion they can achieve so quickly. Their speed and distance increase substantially, which is why I see some of the biggest gains from them. These moves are for everyone from tour players to recreational golfers.

Embracing the flow, athleticism, and an unrestricted turn will also help you avoid injury. Think about it this way. If I were to move a cinder block and tried to use only my arms and back, then I may be able to accomplish the basic task of moving it. However, if I were to use my legs, glutes, hamstrings, and calf muscles by bending down with hip flexion, then I would have distributed that 50 pound load throughout my whole body. I could move the cinder block more efficiently and more economically thereby reducing my risk of injury.

That is why we see players with longer golf swings having remarkably fewer injuries over their entire career. Vijay Singh has hit more golf balls than anyone and has not sustained career stopping injuries. Bubba Watson has slender arms and build, yet his long unrestricted golf swing has made him one of the most dominant long drivers of all time.

You may be asking yourself, “What are the golf swings and moves I need to work on?” and “What are the ones I should avoid?” We will dig more into the details later in the series, but here is an overview.

3 signs of a bad golf swing

1. RESTRICTED HIP TURN ON THE BACKSWING

Let us hope this idea finally dies a quick death. There is no evidence to suggest a limited hip turn helps you hit the ball straighter. Most of the great and dominant swings have an unrestricted hip turn, which often results in the lead heel being off the ground much like the great Jack Nicklaus, Ben Hogan, Tom Watson, or Johnny Miller.

2. LATERAL SLIDE ON THE DOWNSWING

When you slide your hips back and forth severely as you swing, you are going to have lower spine issues. This is especially true if you add power to that sliding action. It will also move the bottom of your swing around, which will make for inconsistent contact.  Too much slide will also kill your ability to rotate, which is why the legends stay largely centered.

3. FOCUSING ON THINGS THAT DON’T MATTER

There are so many swing myths that keep getting busted. Keep your head still, keep your left arm straight, keep your left heel planted, keep your posture rigid, do not lose your balance in the follow through, and focus on a slow takeaway. So many great players violate these swing traits.

3 signs of a good golf swing 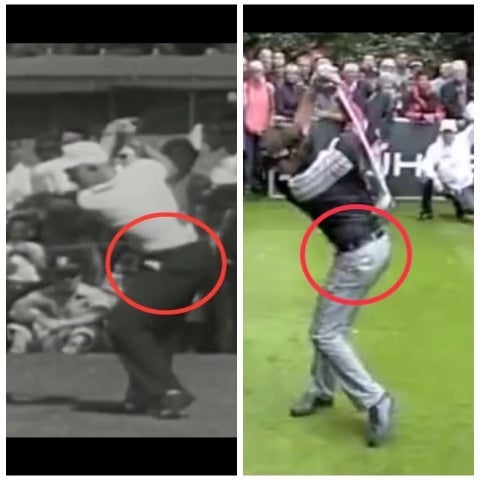 The golf swing is a turning motion that needs to be sequenced properly from start to finish. There should be no signs of restriction with the timing of the lead heel being lifted, the trail leg extended, and getting as much turn into your hips and shoulders as you can. A long swing is not a must, but an unrestricted one is. Turn, turn, turn – that is where the power is.

2. MINIMAL LATERAL SLIDE ON THE DOWNSWING

Shifting over to your lead side happens much quicker than most people think. Shortly after the top of the back swing, all the pressure is pretty much into the left side for a right handed golfer and the right side for a left handed golfer. If you wait and try to “shift your weight,” then you will likely be too late and slide.

The engine of the golf swing is in the middle. How you move your core, pelvis, hips, spine, and legs ultimately determine how good your swing is. These are the key traits of the dominant golf swings in this game. You may see the greats get into different positions with their arms and club, but they all move their middle the same.

With the golf swing I want to help you build, I want to emphasize that you will hit the ball farther. This brings the potential for the ball to travel farther offline. But I totally reject the idea that a longer more powerful swing is any less accurate. Ben Hogan is regarded as one of the most accurate. He was way past parallel and was incredibly powerful.

Accuracy comes from the correct movements and proper sequencing. Yes, mishitting a shot at 120 miles per hour instead of 100 miles per hour is a bigger problem. When the sequencing is correct, control is not an issue. You will hit the ball farther and as we have seen with the importance of Strokes Gained: Driving on the PGA Tour, the game will become easier.

We started this section of the series talking about the dominant golf swings of the past and present. As we dig into the meat of the moves in the subsequent sections of the series, I want you to know all my observations on the golf swing are based on what I see the best players do.

You may remember what I said earlier, which is good golfers learn from observation and imitation. This is especially true with junior golfers because they learn and adapt quicker than adults. If you ever need further guidance understanding what these moves should look like or how they should come together, here is a list of my favorite golf swings to study:

My favorite golf swings to study